OUTLANDER star Sam Heughan has revealed that filming for the new series of the smash-hit TV starts next month.

The Scots actor announced the news during a live question and answer session on his Twitter page in the early hours of Friday morning.

The news will come as a welcome surprise to Outlander fans after producer, Matt Roberts, had suggested earlier this year that season three wouldn’t start until 2017.

The heartthrob also had to turn down a marriage proposal and revealed his love for Amy Winehouse music. 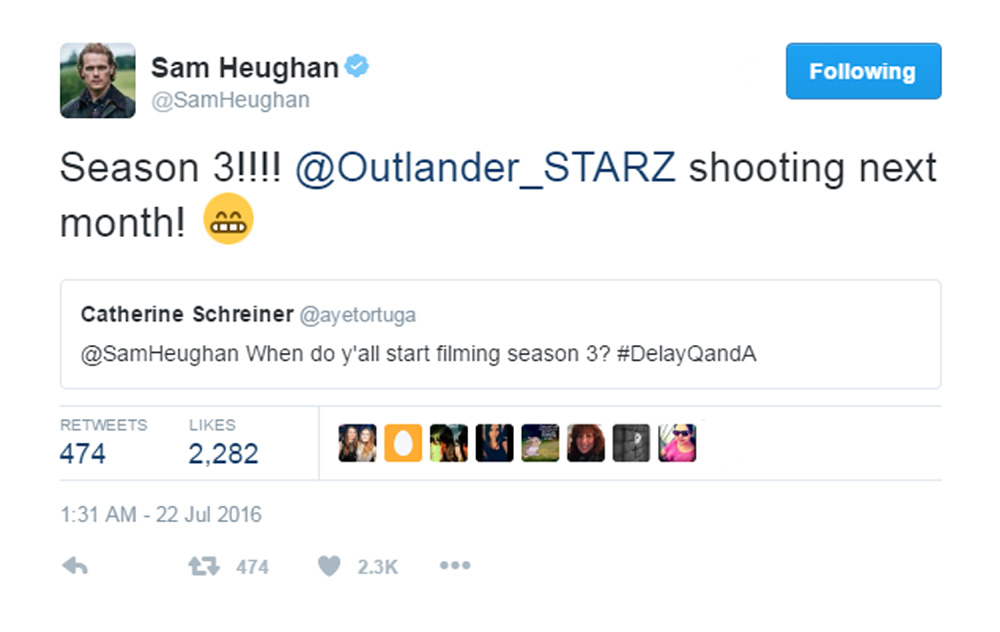 Catherine Schreiner was quickest of the mark to ask the question all the fans wanted to know: “When do y’all start filming season 3?”

@Jill_millander said: “Next month?? OMG so excited about this!! #Outlander.”

Whilst @jmclark1 replied: “So happy to hear that! You are so amazing as Jamie! Missing #Outlander!”

The Scottish star had invited his followers to ask him ten questions, using the hashtag ‘DelayQandA’, after getting stuck in an airport for five hours during a flight delay.

The 36-year-old from Dumfries and Galloway also revealed that he’d want “company, electricity, music and a dog” if he was stranded alone in a cave for seven years and that his favourite song is, “Valerie” by Amy Winehouse.

He also told you actors to “stay strong” and watch or read as much as possible whilst persevering with “passion and determination”.

The star also declared that he enjoys listening to “Bohemian Rhapsody” by Queen during his downtime from acting.

He even had to turn down a marriage proposal by telling one over exuberant fan that she was “spoken for” when she asked “will you marry me?”

Heughan also stated that 2017 is going to be “off the scale” when asked how awesome next year would be for his “My Peak Challenge” charity.

The charity was founded by him 2015 and asks people around the world to reach new goals and complete physical challenges to help raise money for various causes.