A VIDEO shows the moment a group of deaf thrill-seekers protested by sign language after they were banned from the zip wires.

The eight-strong group turned up for a 30th birthday party but were refused entry because they could not understand safety instructions.

Lynda McQueen and her friends claim they are victims of “sickening discrimination” because they requested an interpreter two days earlier.

The firm has since apologised for turning away the group – just three months after it said sorry for refusing entry to two women in Rugeley, Staffs. 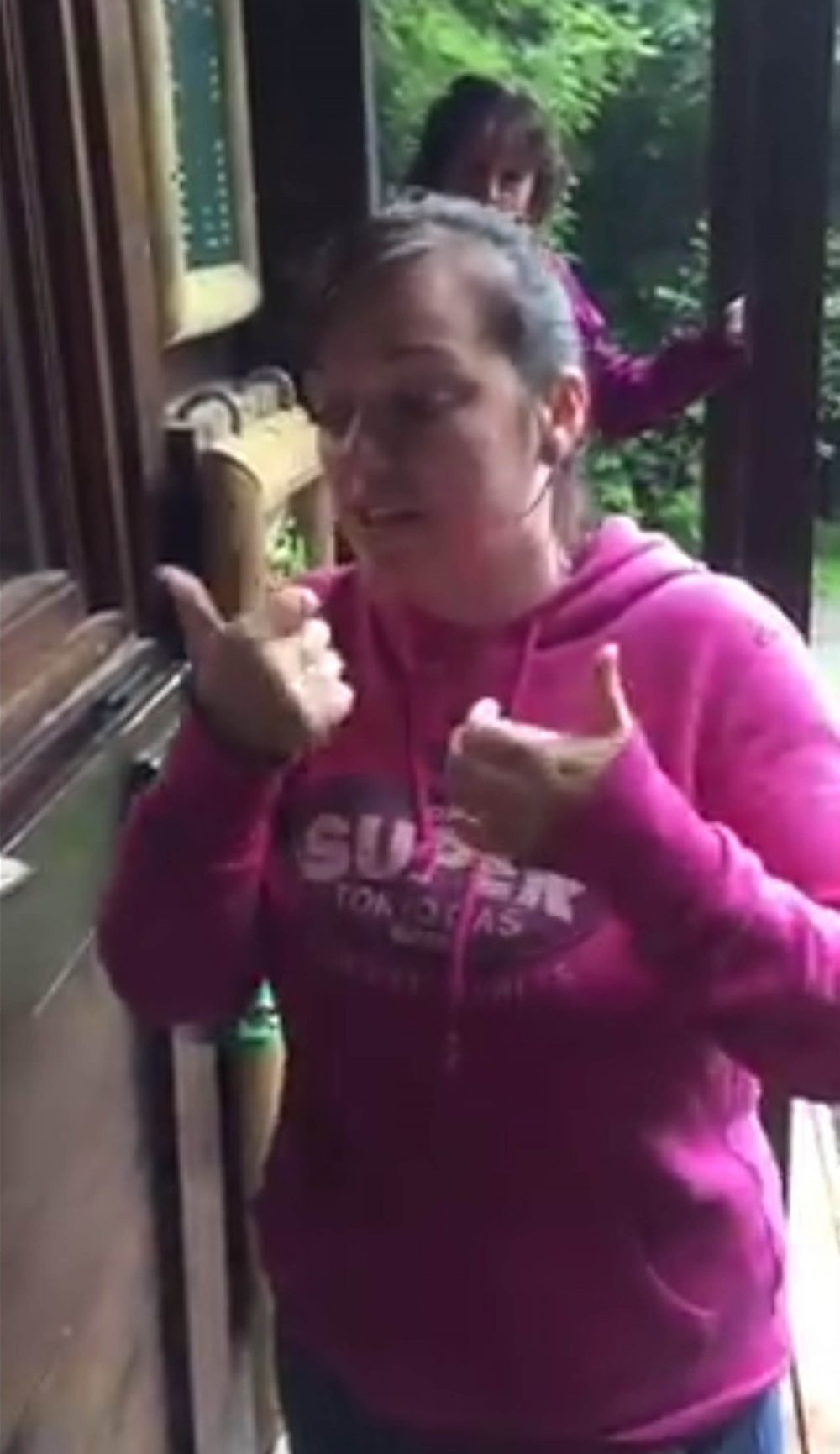 However staff didn’t get back in touch until 20 minutes after the women, who had travelled from all over Scotland, had arrived.

Lisa Johnston posted the video writing: “Totally unbelievable. We plan and paid to go “Go Ape” for Lynda’s 30th and all of us with six cars drove to Peebles only to be refused entry just because we are deaf.

“Have recorded video. It’s very sickening to be discriminated like that. We are able to do things. They said it for their safety.” 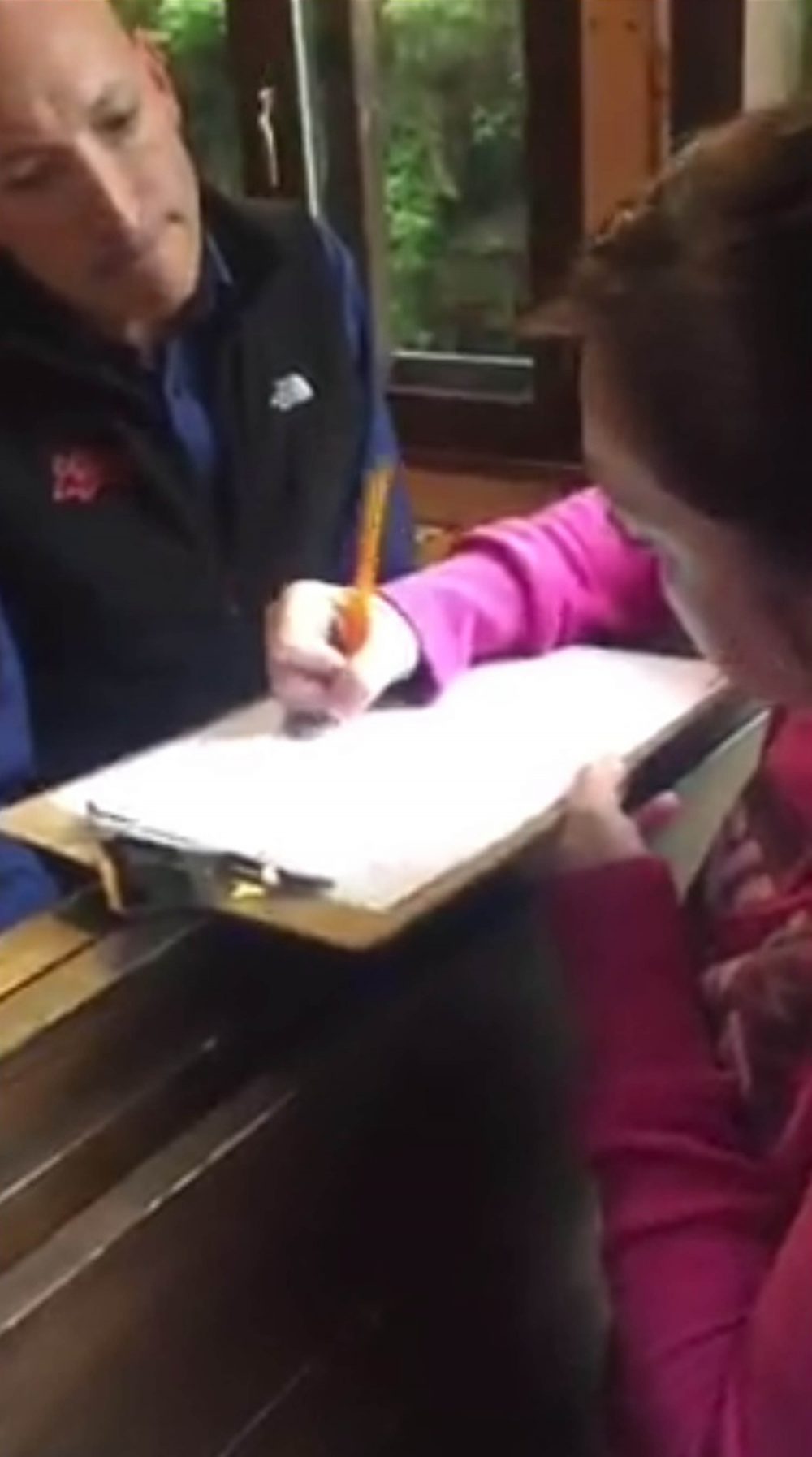 Lisa can be seen in the two-minute-long video looking appalled and using sign language at the camera to convey her disapproval.

A member of staff is then shown communicating with her by writing responses on a piece of paper.

One message on the note reads: “Not discriminating. I need to know you’ll be safe.”

After being uploaded on Friday the video instantly went viral with more than 166,000 views over Facebook. 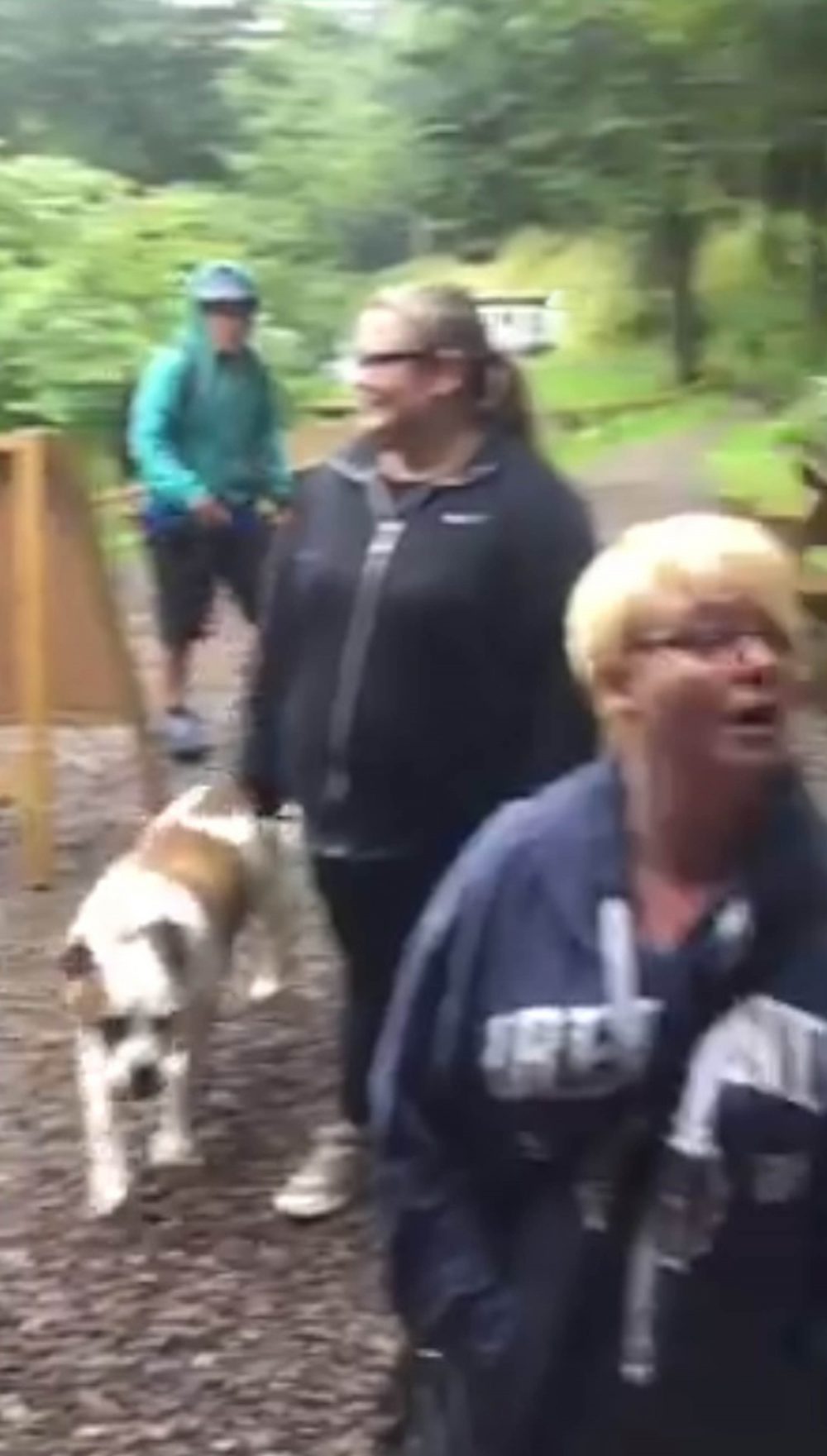 Hundreds of shocked users have taken to the post to leave comments condemning the company for their “appalling” decision.

Brenda Dunn wrote: “Does the fact that some customers may be profoundly deaf come as a surprise to you? As said before it’s not rocket science to have alternative arrangements in place and advice on your website for deaf people. Appalling.” 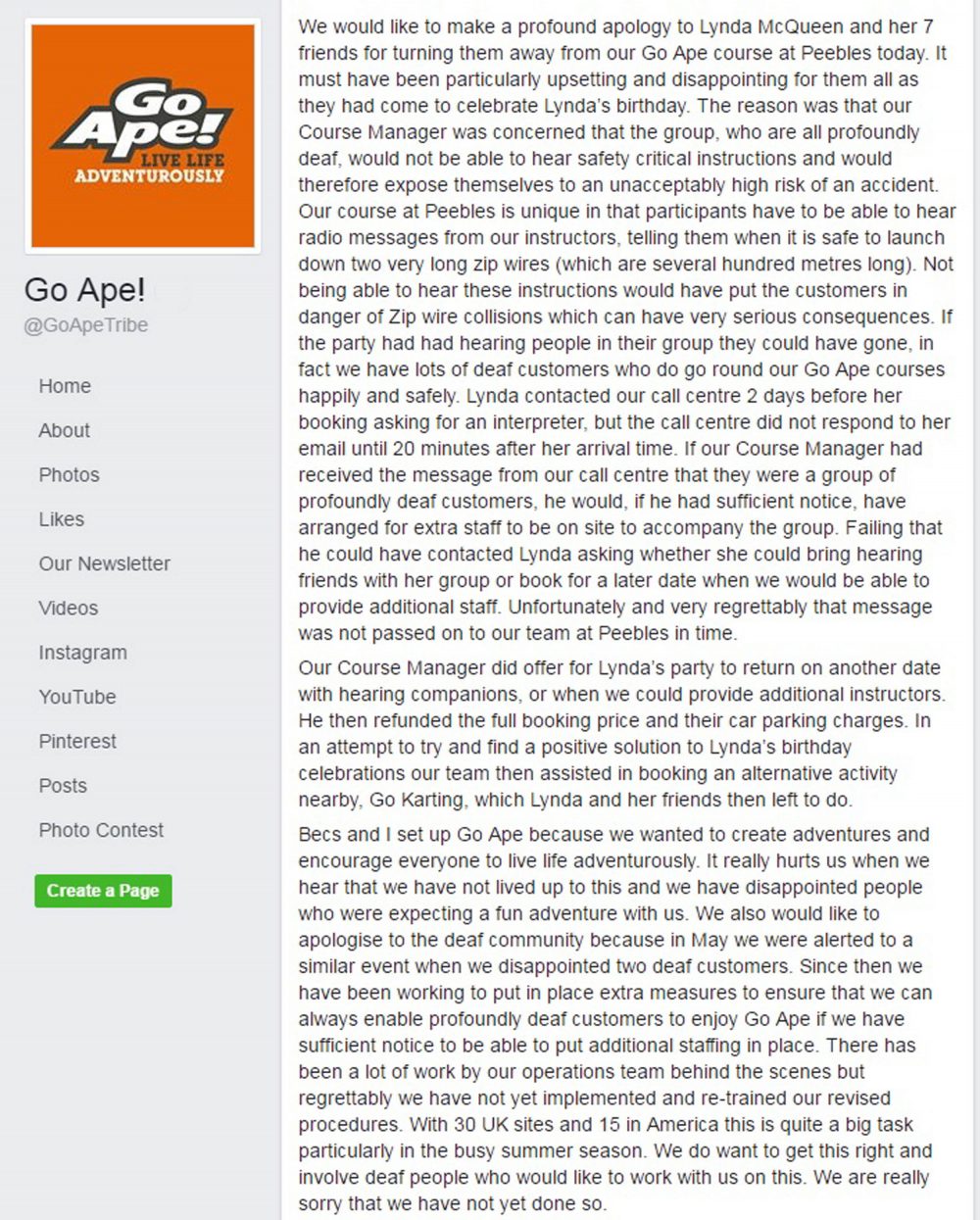 And Sarah Brend said: “This is disgraceful. These people who booked the trip clearly understood what to expect at Go Ape – they’re not stupid.

“I’m deaf myself and I’ve been to Go Ape years ago and I coped fine. You guys judged too quickly based on their level of deafness and that’s discrimination.”

The friends drove from up to 200 miles away for the birthday bash – only to be rejected.

Lynda McQueen from Livingston, West Lothian travelled around 35 miles to Go Ape for her birthday celebrations.

Her friend Natalie Greenall, believed to be from Dunfermline, Fife, would have travelled 40 miles before getting rejected from the birthday outing.

Natalie wrote on social media: “They should made Peebles a clearly no go for deaf people and explain why on their website.

“We would be thankful for this small but valuable information and look at other Go Apes that would allow us to go on instead of wasting one to four hours driving and arranged days off work and childcare.

“I checked the policy on your website – nothing about deafness. We thought there would be no problems, how wrong we were.

“As you said this happened before why wasn’t the policy changed and make Peebles a “no go” for deaf people very clear on your website?”

Another friend, Lisa Johnston, also revealed that one friend drove over four hours from Lossiemouth, Moray, to make the birthday event.

She said: “We didn’t get equal access and was wrongfully denied entry, as this has happened before, you promised that it will improve, the incident was in Cannock and now Peebles.

“We took the time travelling between 1-4 hours – the longest travelling came from Lossiemouth.

“We had to book day off work and arrange childcare to have this fun enjoyable day that we thought it would be accessible after the last incident at Cannock.

“Seems like it gone in one ear and out the other now this has happened again. No reasonable adjustments has been made which you should have done.”

Go Ape founders Tristram and Rebecca Mayhew later released a statement saying: “It must have been particularly upsetting and disappointing for them all as they had come to celebrate Lynda’s birthday.

“The reason was that our Course Manager was concerned that the group, who are all profoundly deaf, would not be able to hear safety critical instructions and would therefore expose themselves to an unacceptably high risk of an accident.

“Our course at Peebles is unique in that participants have to be able to hear radio messages from our instructors, telling them when it is safe to launch down two very long zip wires (which are several hundred metres long).

“Not being able to hear these instructions would have put the customers in danger of Zip wire collisions which can have very serious consequences.

“If the party had had hearing people in their group they could have gone, in fact we have lots of deaf customers who do go round our Go Ape courses happily and safely.

“Lynda contacted our call centre two days before her booking asking for an interpreter, but the call centre did not respond to her email until 20 minutes after her arrival time.

“Unfortunately and very regrettably that message was not passed on to our team at Peebles in time.

“It really hurts us when we hear that we have not lived up to this and we have disappointed people who were expecting a fun adventure with us.

“We also would like to apologise to the deaf community because in May we were alerted to a similar event when we disappointed two deaf customers.

“Since then we have been working to put in place extra measures to ensure that we can always enable profoundly deaf customers to enjoy Go Ape if we have sufficient notice to be able to put additional staffing in place.

“There has been a lot of work by our operations team behind the scenes but regrettably we have not yet implemented and re-trained our revised procedures.”

Scot Hears For The First Time