A SCOT made a hilarious bid to sign up X Factor legend Wagner for a house party by promising him “snout, Mad Dog and patter”.

The Birmingham-based Brazilian demanded £2,000 plus flights and accommodation costs to turn up at the house party in Cumbernauld, North Lanarkshire.

Dale Rushford responded by saying that although they didn’t have money to pay him they had space in their “gaff” for him to sleep. 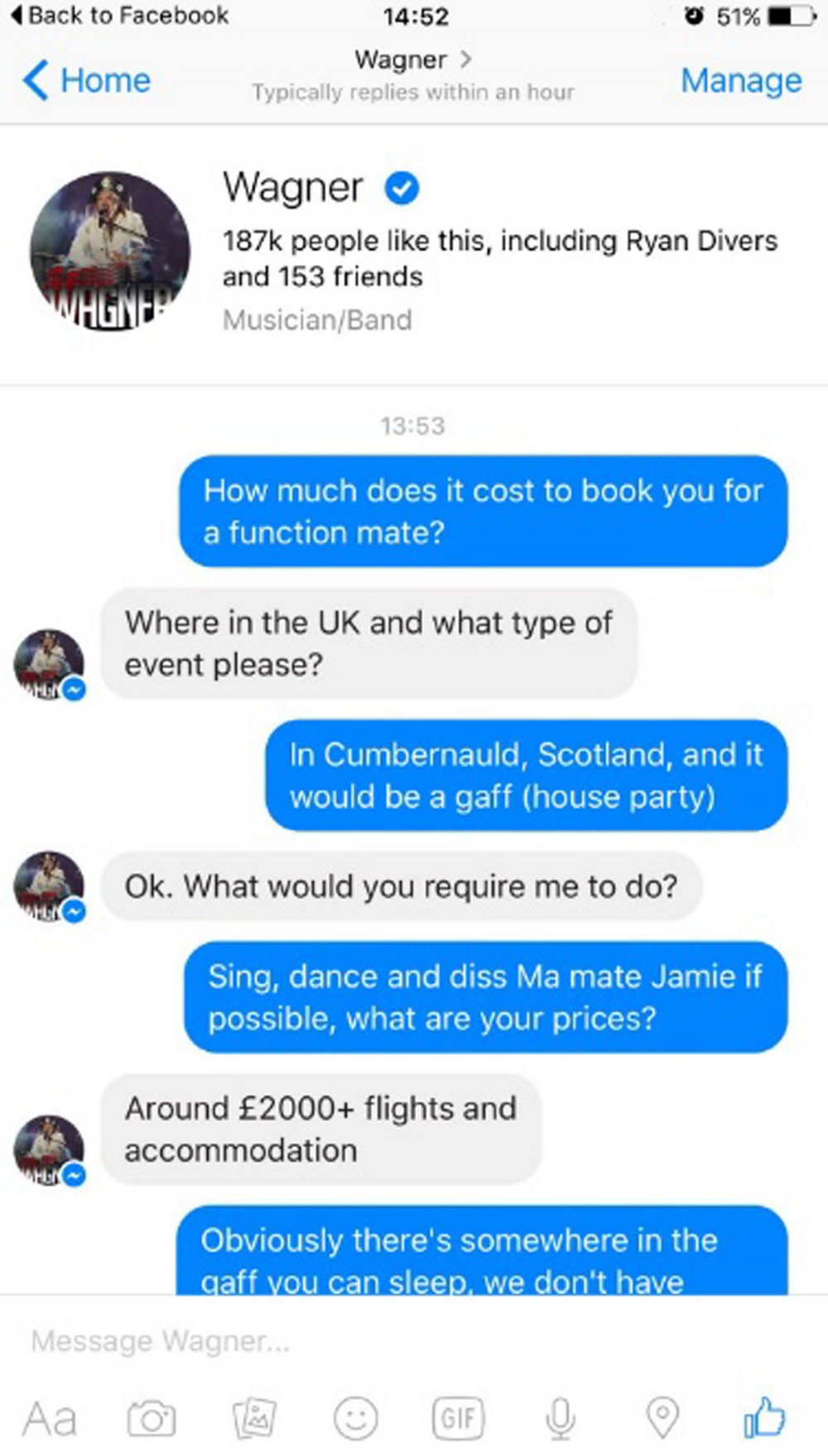 Dale even went as far as to offer to get his friend, “Jambo”, to pick up Wagner at the airport – in his Corsa.

At this point it appears negotiations broke down and nothing more has been heard from Wagner.

Dale started the conversation a fortnight ago by privately messaging the 59-year-old on his official Facebook page.

He wrote: “How much does it cost to book you for a function mate?” 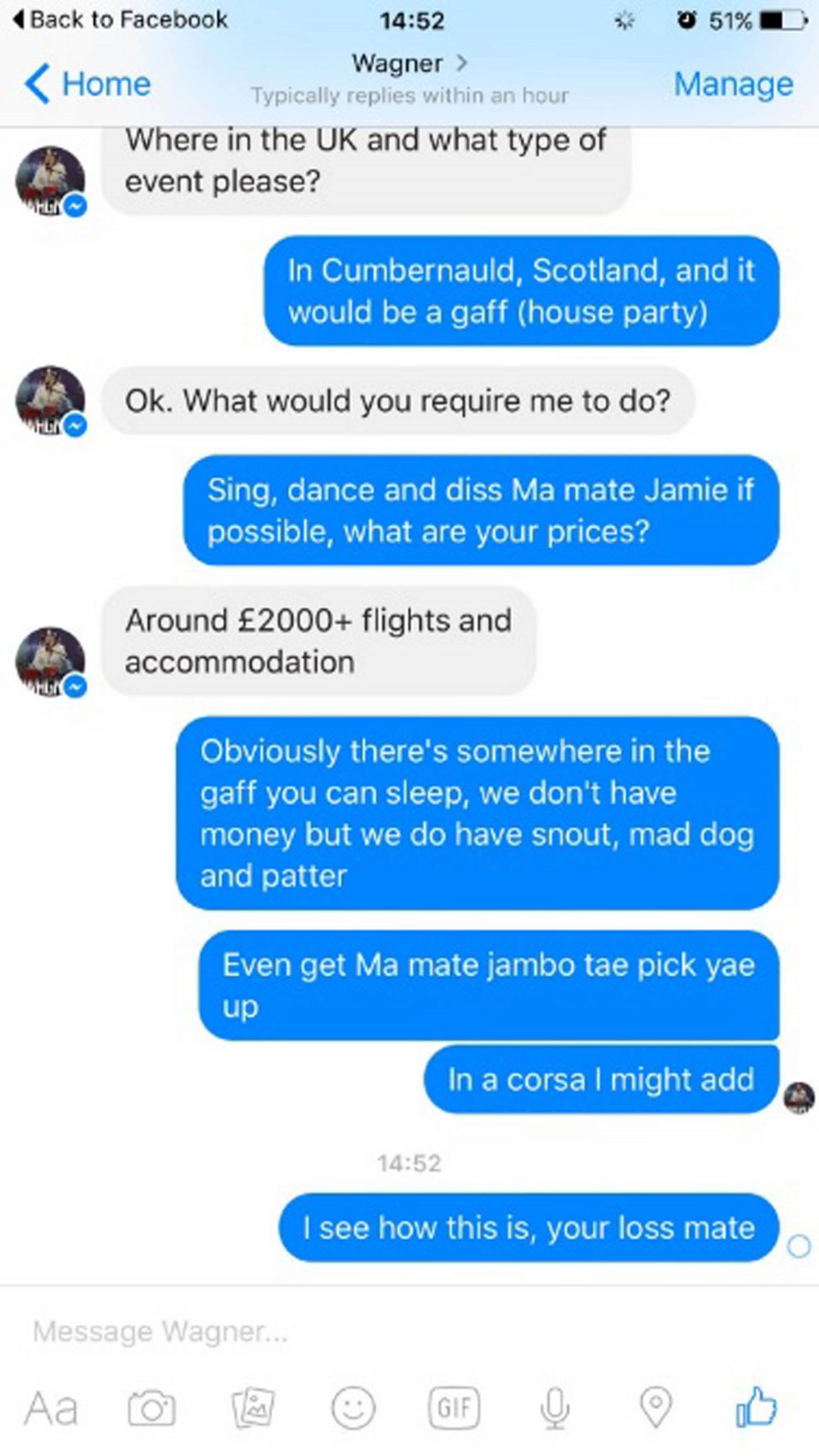 Wagner quickly responded: “Where in the UK and what type of event please?”

Dale said: “In Cumbernauld, Scotland and it would be a gaff (house party).

When asked by the 59-year-old what he would be required to do, Dale said: “Sing, dance and diss my mate Jamie if possible.”

Asked for his prices, Wagner responded: “Around £2,000 plus flights and accommodation.” 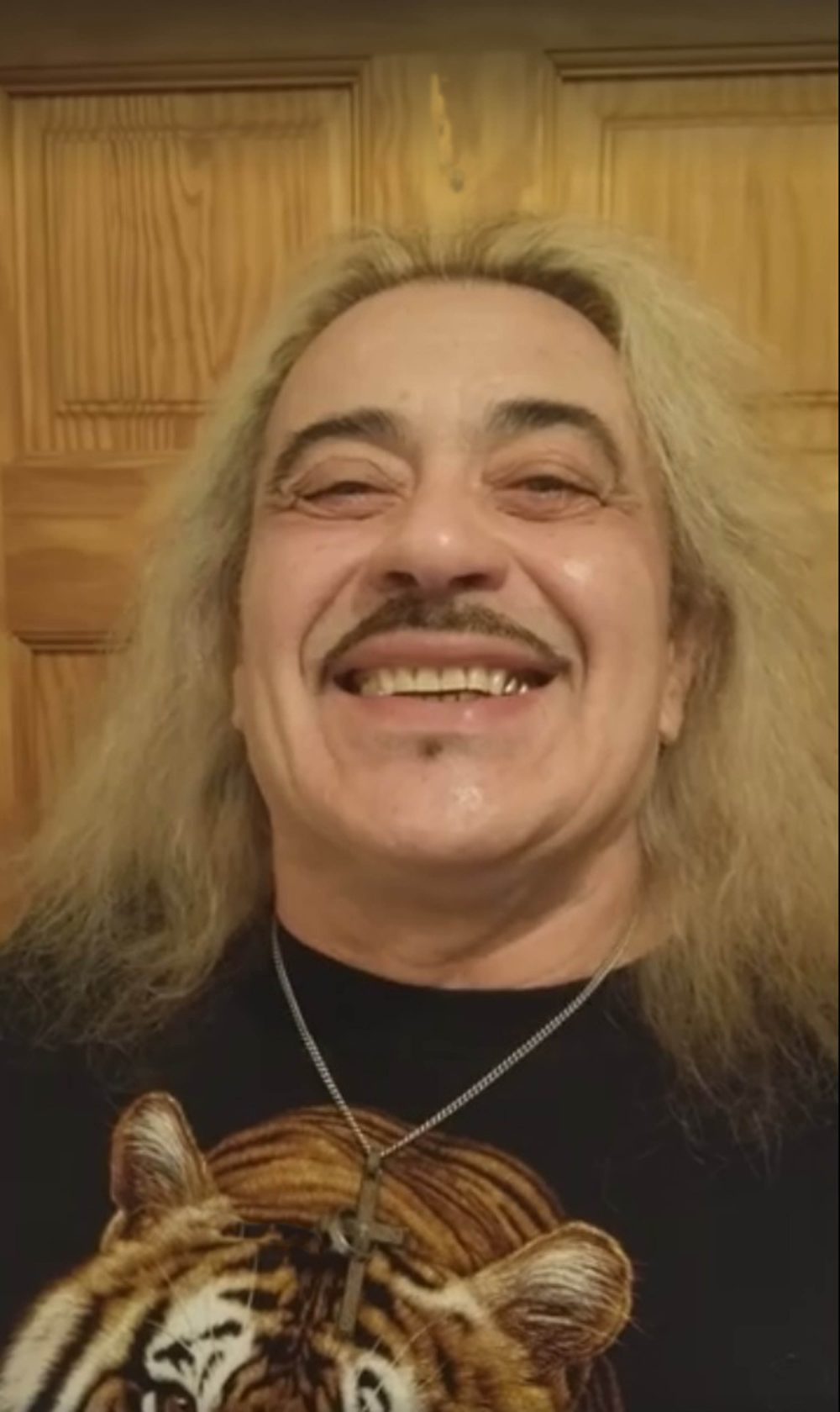 In a desperate bid to book the star, Dale wrote: “Obviously there’s somewhere in the gaff you can sleep, we don’t have money but we do have snout, Mad Dog and patter”.

“Even get my mate Jambo tae pick yae up. In a Corsa I might add.”

After not hearing back for an hour, disappointed Dale reached out again to say: “I see how this is, your loss mate.”

The post, captioned “No much ae an entertainer is he”, has been shared more than 2,000 times over Twitter and received over 3,000 likes.

Wagner – full name Wagner Fiuza-Carrilho – has become infamous for his online video requests since losing out at the X Factor title in 2010.

The former PE teacher requests a fee to record birthday and celebratory messages and post them over social media.

Last year he came under fire after being tricked into singing pro-IRA song, Wolfe Tones’ Celtic Symphony including the controversial line “oo-ahh up the ra’”.