JASON Cummings looked across a crowded Paris bar at Rio Ferdinand and Alan Shearer and was struck dumb.

However, it was the lengthy chat the star striker had with manager Neil Lennon that convinced him not to leave Hibernian.

Cummings, who yesterday lifted the Ladbrokes Championship player of the month award for August, has confessed for the first time he was close to pushing for a move away in the summer as he contemplated his future. 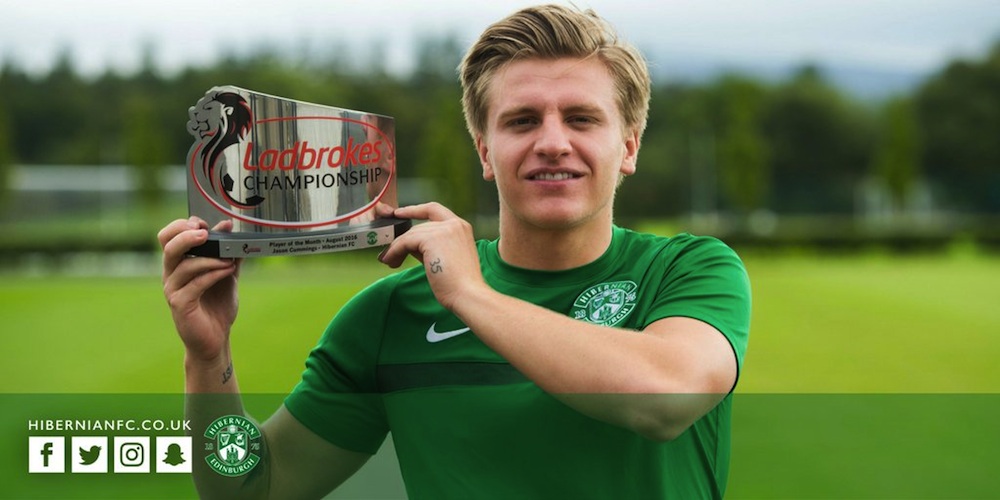 With Lennon aware he had some convincing to do, the 21-year-old was invited to join the new Easter Road manager during his spell as a BBC pundit at the Euro 2016 championships in France.

At this point, Cummings – who had a year left on his deal – says he was still undecided, but that he penned a new four-year contract within days is a sign of Lennon’s persuasive powers.

And the Scotland under-21 cap has admitted that a night chewing the fat with Ferdinand, Shearer, Dean Saunders, Chris Waddle and Martin Keown was the icing on the cake.

“I met the gaffer and he just said ‘we’ll go and have a wee lunch in here, I know a wee quiet place up here’,” explained Cummings, for whom Hibs turned down a bid of up to £1.7 million from Peterborough United.

“I was like ‘what am I doing here, man?’. I don’t know what I was doing there. But it was good, probably a story for the autobiography.

“I was a bit star-struck sitting with the Shearers and that kind of company. They spoke to me about football.

“It was surreal. I was just sitting like a kid, looking at them all. It was probably the quietest I’ve ever been! It was some experience.

“A couple of them did say the gaffer was obviously a good gaffer, this and that, but there was just a lot of banter as well.

“But I had a good chat one on one with the gaffer over there. I bought into it straight away, the way he was planning for it to go this season, winning the league and all his ambitions. I just bought into it. I’m glad I signed.”

Lennon has already said he felt Cummings was of the mindset to leave and the youngster has admitted that might have been the case.

He added: “I do love it here so there was no reason to leave Hibs, there was nothing bad happened or I wasn’t enjoying it.

“One of the reasons was to better my career, because there is going to be a stage where I want to take that step and try to play at a higher level.

“But I’ve always talked about getting Hibs promoted as well. I did want to stay and do that.

“The boys here are brilliant and, with the gaffer, it was just that final thing that swayed me to stay here.

“When I went over to France, if I’m being honest, there were pros and cons. But, meeting the gaffer, it just made me want to stay more. He spoke to me one on one and that sealed the deal for me.”

Cummings, who netted 25 times last term, has already scored seven in six outings for Hibs so far this season.

According to Lennon, he probably should have added to that total in Saturday’s 1-0 win over Dumbarton, and the player himself believes it is those high standards being imposed from the dugout that can lead him to even better things in the coming weeks and months.

“The manager is keeping on my back to keep me on my toes,” he said. “He just wants to get the best out of me and he doesn’t want me to get complacent.

“If there’s nobody shouting at me then I would muck about and do my own thing. If someone is on my back then it keeps me in check.

“I try and listen to him during games but if I miss a big chance I try and stay away from the dug out! Seriously, I listen to him a lot and he gives you a lot of good advice.

“The manager has played at the highest level so he knows what it takes and you learn a lot from him. He’s probably seen that I can drift in and out of games and I play better when he’s on at me.

“He’s worked with great strikers like Gary Hooper and Leigh Griffiths so he knows what’s he talking about.

“You’ve got to look at the fact that he has played with one of the greatest players of all time, in Henrik Larsson.

“He knows what he did in training and what he was capable of, and he’s probably trying to get that into me a wee bit.”