Josh Taylor kept his discipline amid a barrage of verbal jabs from Commonwealth super lightweight title opponent Dave Ryan’s trainer, and has vowed to do his talking in the ring tomorrow night.

The vociferous Clifton Mitchell, who coaches and manages Derby-based Ryan, lit the blue touch paper on what was a cordial pre-fight press conference in Edinburgh yesterday, saying: “We’re coming to his house and are going to pull his pants down and spank him.

“You’d think they were talking about Floyd Mayweather the way they are going on about this guy.” 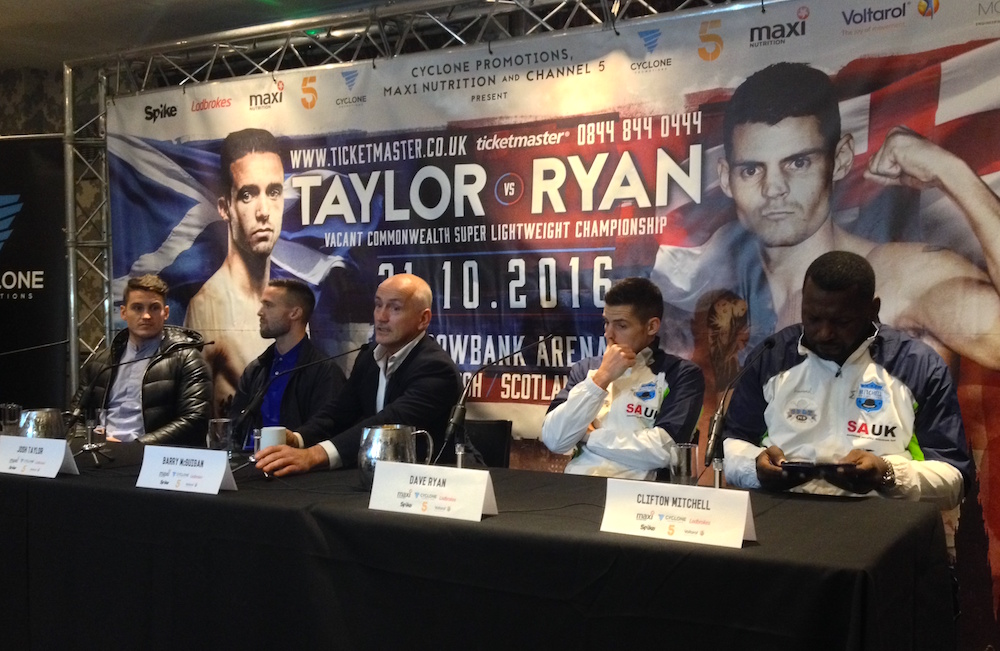 Taylor’s promoter, former boxing champion Barry McGuigan, was visibly riled by the insults directed at his man and son Shane, who trains the East Lothian fighter, as the media event threatened to turn ugly two days before the main event at Meadowbank.

“Don’t speak to me like I am a clown,” retorted McGuigan.

“I will be looking for an apology when this is all over and Josh has won.”

Commonwealth gold medalist Taylor, who is facing the toughest test of his career having won his previous six fights inside two rounds, remained calm as others lost their cool and has vowed to demonstrate why McGuigan senior rates him so highly.

Speaking after he climbed down from the top table, Taylor said: “Cliff is just acting the big donkey. He can say what he wants, he’s not the one who will be fighting.

“I’m feeling very confident I’m going to do the job on Friday night. I don’t need to be trash talking, he can say what he wants.

“He’s trying to get under my skin and ruffle a few feathers but it’s just all tongue and cheek. He can say what he wants, he’s acting the donkey.”

Taylor is confident he can overcome the gulf in experience between the two fighters. While the 25-year-old has only fought nine rounds, Ryan, at 33 years of age, has boxed in 181 and has previously held the Commonwealth title.

Taylor added: “I’m relatively inexperienced but I’ve been to hell and back in the gym and I’m fully confident going into this fight. I’m confident I’m going to do the number on him. If not it will be a comfortable 12 round decision.

“This is the biggest fight of my career. Defeat doesn’t even come in to my thinking.

“I’m 100 percent confident and I’ll leave everything in the ring.

“I’ve never felt so relaxed and confident going in to a fight.

“I won’t underestimate Ryan. I am confident in my fitness and durability and have no worries about going all the way.”

Englishman Ryan was more respectful than his trainer.

He said: “I’m really looking forward to the fight. I’ve had a fantastic training camp.

“It will be a cracking fight but I believe I will come out victorious.

“Everyone else has written me off. I’ve very confident.

“Cliff’s his own man and can say what he want’s to say. I’ll do my talking in the ring.”