BIZARRE footage has gone viral on social media showing a man exercising topless in his garden.

Twitter user, Laura McKay, spotted the strange scene outside her window of the grey-haired man performing a series of unusual movements in his front drive.

The 13-second clip, thought to have been filmed at 7am on Monday in Glasgow, shows the man performing karate kicks and chops as he moves around the driveway.

Laura tweeted the clip with the caption: “Can someone please come collect their da from my neighbour’s garden?”

The strange exercise routine and its’ location has caused quite a stir on Twitter, where Laura’s tweet has been liked and retweeted well over 5,000 times.

The footage starts as the man stands with his back to his garage door and performs a kung-fu style kick with his right leg.

He then launches forward in a sweeping motion before spinning round and twisting his body to follow-up with another high kick.

As he regains composure, he widens his stance before performing two quick kicks and turns 180 degrees to flick out his back heel. 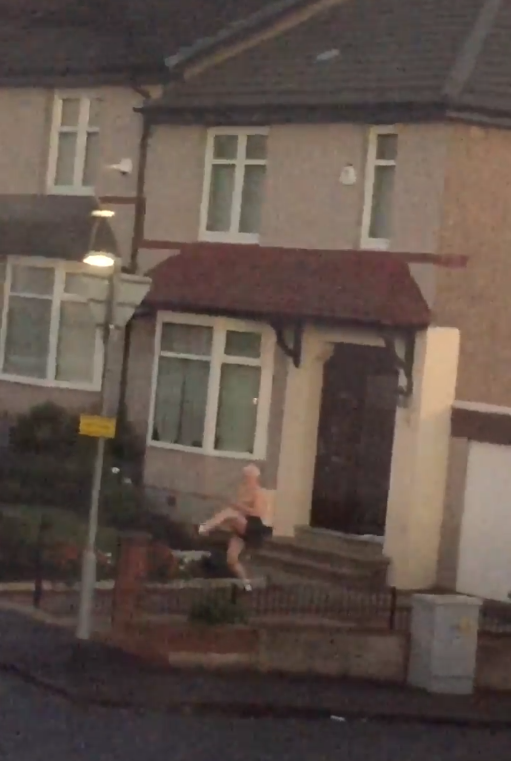 The odd clip stops with the man standing nearly at the pavement outside his house in a traditional martial arts stance, with one leg behind the other and his arms ready for combat.

Unsurprisingly, fellow Twitter users were quick to respond to the video.

Gill Kennedy appears to be the granddaughter of another resident in the street and wrote: “My gran’s going to be traumatised. What’s going on?”

Laura responded to say: “Poor Audrey is actually going to be scared to leave the house.”

To which Gill replied: “My Gran was telling me about him! This is him exercising and keeping fit, no joke.”

Other users were quick to provide their own versions of the ‘yer da’ jokes.

Jason Naismith wrote: “What’s yer da doing still out? He no meant to be working the day?”

Craig Payne tagged a friend in his comment to say: “Yer da’s at it again.”

Whilst Paul Rafferty added: “I hope I can move like that when I get to his age.”