A SCOT has pulled off one of the “Facejacks” of all time by renaming his mum’s account “A Honkin Jobbie”.

Caron Saunders from Wishaw, North Lanarkshire, has now been forced to use the name when writing any posts on Facebook.

Under Facebook guidelines, which prohibit users from changing their names too often, she will be stuck with the minging monicker for 60 days. 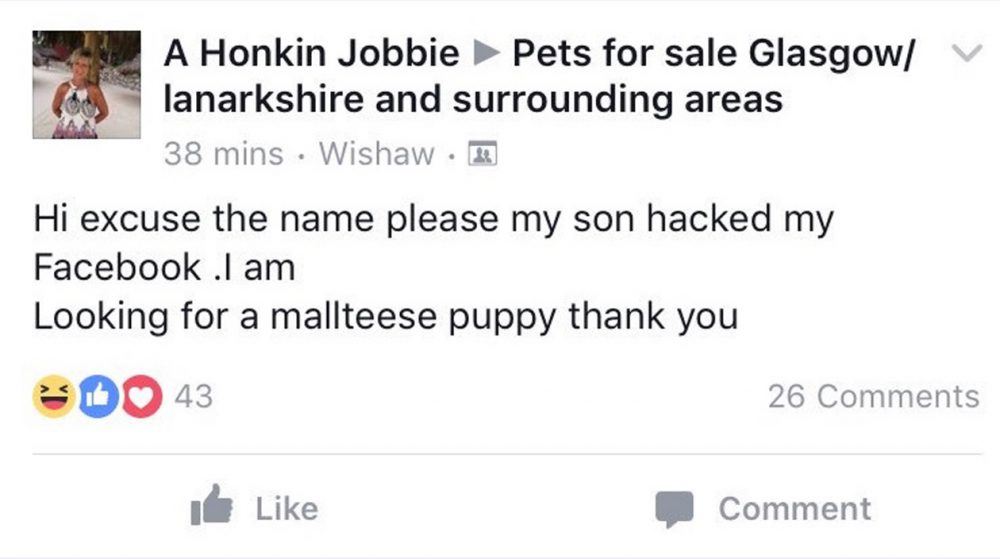 All posts on the 53-year-olds page – past, present and two months into the future – now feature her new name, defined by the Urban Dictionary as the “Glaswegian term for “smelling” and “poo poo”.

Ironically, the posts include a review of a travel firm which she described as speaking to her like a “piece of s***e”.

The prank, pulled off by her son Simon, was outed after Caron messaged the Pets for Sale in Glasgow page on the lookout for a new dog.

She said: “Hi excuse the name please, my son hacked my Facebook. I am looking for a Maltese puppy. Thank you.

The post was immediately inundated with likes and comments, with one screenshot on Twitter reaching almost 3,000 retweets in 24 hours.

It also appears that the same Scots joker has changed the Facebook name of his girlfriend to “Trumpet Trousers (Captain)”.

The Scots nurse, formerly known as Danielle Kaba, has been passing sympathetic messages to Honkin Jobbie.

Danielle, 25, today revealed that Simon’s mum stopped using Facebook for a while “because she was so embarrassed”.

She said: “Caron posted yesterday on one of the public pages looking for a dog so people seen it that way.”

“We do all see it as a joke. He had actually done it to me first and everyone was laughing at it. He changed mine and then we said we would do it to his mum because we had her password.

“She really wasn’t happy and embarrassed because she thought everyone would make fun of it but most people have just seen the funny side.”

Simon, a railway engineer for CK Contracts LTD, said: “It started off as just a family joke really. I had come in from work and me and Danielle were sat there and thought we would have a bit of a giggle.

“My mum had left her phone out when she left the room so we sat for a couple of minutes thinking of what to change it to. There were a few options but I had to be quick so just changed it to that.

“It wasn’t until a couple of hours when she logged back in and had messages from friends who didn’t realise who she was. 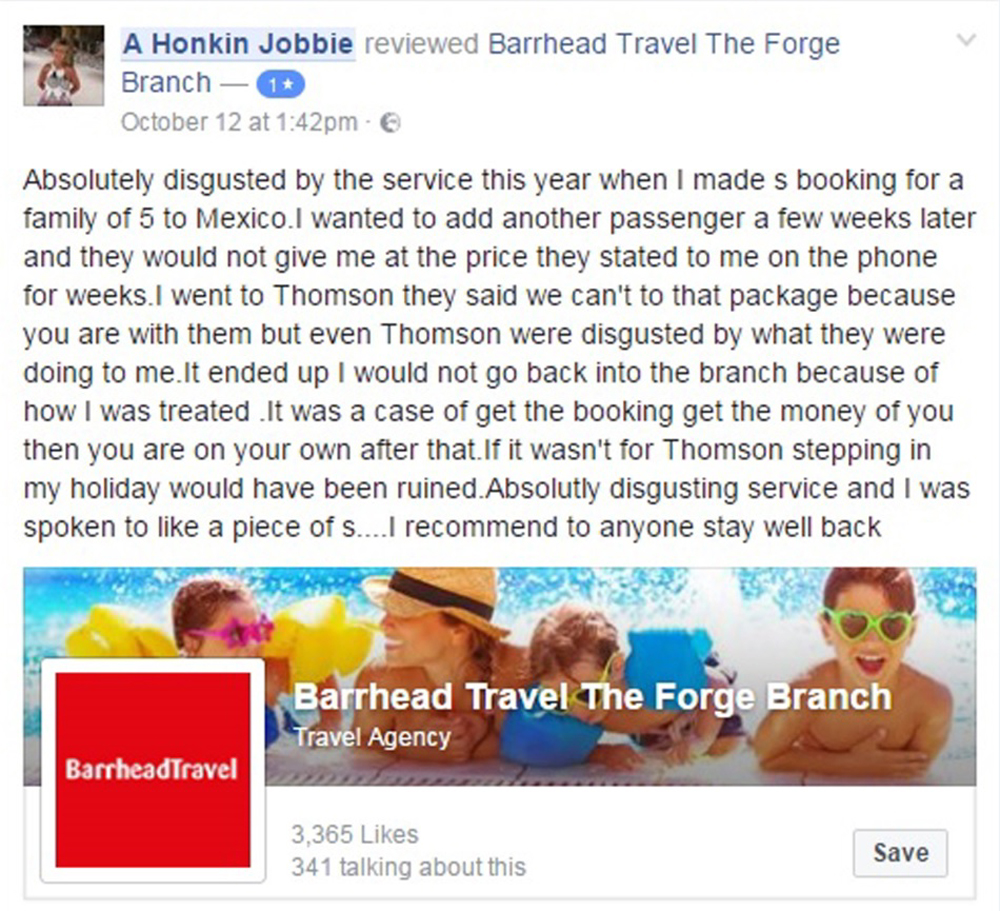 “She had been in the middle of selling some items on buy to sell pages but was too embarrassed to back on. When she finally did she would be constantly apologising for her name.

“She’s in a bit of shock from the situation. I was on my way to work yesterday and my mate got in touch saying Limmy had retweeted it too. Both me and mum are shocked at the reaction from it all.

“I’ve went on her account a few times before and fraped her but this was the first time for the name change. She’s got about three weeks left of having to use it before she can change it back.

“As soon as the 60 days are up though I’ll be jumping back on there and changing it again. She tries to change her password but I’ve got a little sister who helps me change it.

“We all just wind each other up. Between Danielle, myself and my mum, it’s just a constantly a laugh at home.”

Facebook users were delighted at the prank. Writing on Twitter Edwin Schuss said: “Someone wants to be grounded till they’re 18.”