The Tartan Army insist manager Gordon Strachan must resign if he does not have a plan to rescue Scotland from the international football doldrums.

Hamish Husband, spokesman for the West of Scotland branch, reckons the supporters’ patience is close to breaking point after the country’s hopes of reaching the World Cup in 2018 were all but dashed after Friday’s disappointing 3-0 qualifying defeat to England.

And Husband admits seeing the likes of Wales and Northern Ireland compete at the European Championship finals during the summer has compounded the frustration felt among the fans. 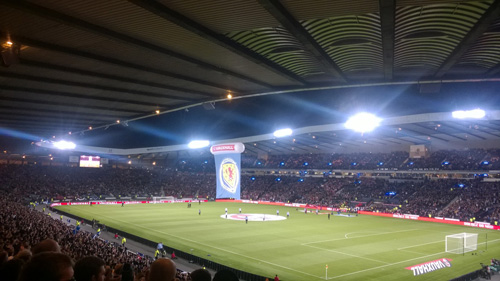 He said: “I was on a bus coming home from Wembley and the reaction was of such negativity.

“Although many fans appreciate that Scottish international football is at a low ebb, many point towards the success of Wales and Northern Ireland, and ask the question: ‘If they can do it, then why can’t we?’

“If Gordon Strachan hasn’t got the answers then the fans think we must look for someone else.

“Not all the blame can be attributed to Gordon Strachan but if he is to continue in a job, I think the fans expect a number of questions to be asked, and answers given.

“The SFA have to grab the bull by the horns, the decision shouldn’t be Gordon’s. It should be the SFA’s.

“What we don’t need is a period of self-analysis because we’ve had that for 18 years.

“And if Mr Strachan goes, perhaps Regan should go as well.”

Scotland have not played at a major finals since France hosted the World Cup in 1998 and Husband has urged the fans to enjoy the success of the women’s team after Anna Signuel’s side qualified for next summer’s Euro Championships in the Netherlands.

He added: “For many of us, the only positive note is the success of the women’s team in reaching the finals next year in Holland.

“For those young fans waiting to taste major championship action, perhaps they should join me and many others in going to watch the women’s team.”