THE Foreign Office has been ridiculed for tweeting a photo of the wrong bridge in a post about the Queensferry Crossing.

Blundering bureaucrats posted a picture of the 126-year-old Forth Bridge rather than the almost-complete, state-of-the-art, £1.35bn road bridge.

The Foreign Office official Twitter account stated: “Opening in 2017, the 2.7 km Queensferry Crossing will be the longest 3 tower cable-stayed bridge in the world #DesignisGREAT #GlobalBritain”

Accompanying the tweet was an image of the iconic, red-painted Forth Bridge, taken before work had even started on the Queensferry Crossing.

Jokers started tweeting pictures of other world-famous bridges, claiming it was the Queensferry Crossing.

@ClatchardCraig tweeted a picture of the Brooklyn Bridge, New York with the words: “You’ve used the wrong image, I think. THIS is the Queensferry Crossing.”

@MajorMcBloodnok replied “I’m afraid you’re mistaken. THIS is it.” with an image of the Golden Gate Bridge, San Francisco.

@ron_mould commented: “No this is the Fifth Firth o Forth crossing” accompanied by an image of a stone bridge.

@ThePoison_dwarf commented: “Nah its this one ??” with an image of a small wooden bridge crossing a pond.

@SandPatterson tweeted: “Here’s the one WM proposed:” showing an image of a dangerous looking rope bridge. 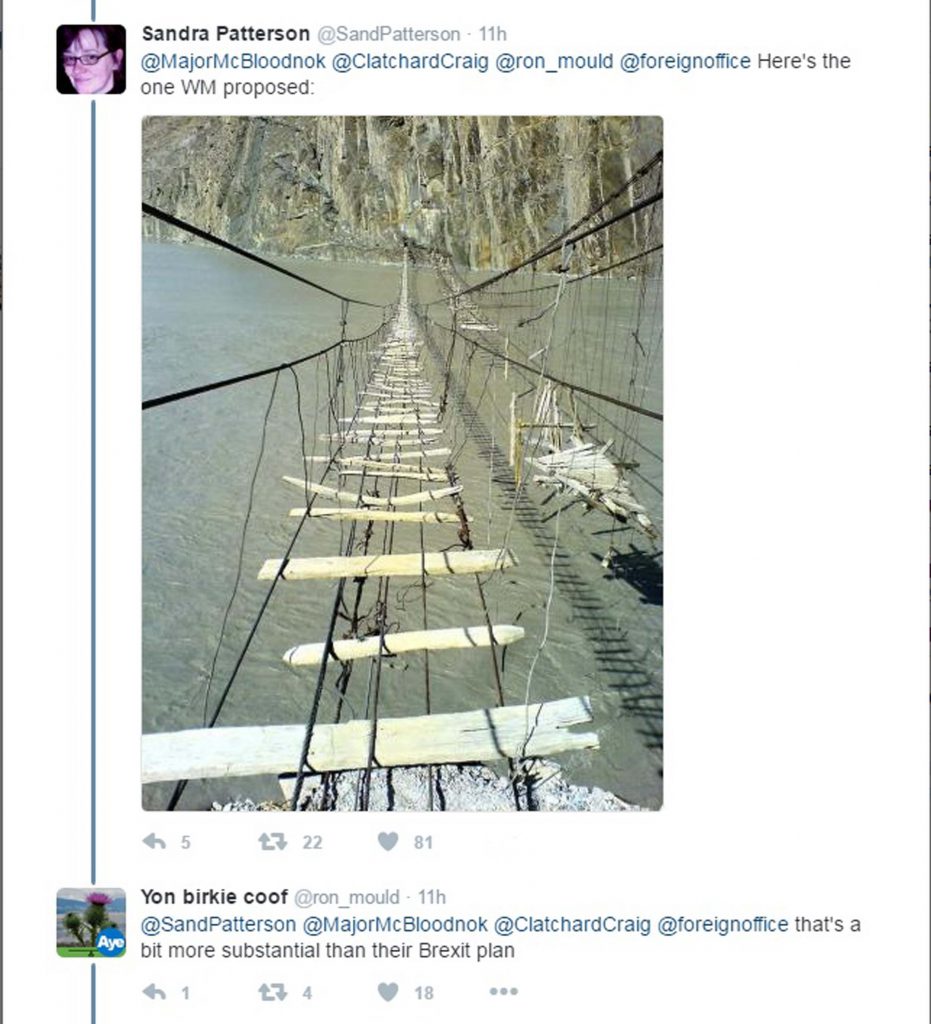 @MajorMcBloodnok replied: “A bridge too far” with what appears to be a black and white still of the Arnhem crossing from the movie A Bridge Too Far.

@rossdouglas tweeted: “I think you may find that this is the bridge you meant.” followed by an image of the bridge from Monty Python and the Holy Grail movie.

SNP MSP Christine McKelvie responded to the FCO image by tweeting: “Hahaha @KeithBrownSNP not only is it the wrong bridge it’s nothing to do with the UK Gov…… #Riddy“

The Queensferry Crossing, due to open in May 2017, has cost the Scottish Government around £1.35 billion.

The 1.7 miles (2.7km) structure will be the longest three-tower, cable-stayed bridge in the world and also by far the largest to feature cables which cross mid-span.

In total, the overall Forth Replacement Crossing scheme is 13.7 miles (22km) long, including major motorway upgrades to the north and south of the bridge.

It includes 23,000 miles of cabling – enough to wrap around the Moon three and half times and very nearly enough to span the circumference of Earth.