A HILARIOUS image has captured a ‘gorilla’ strolling around Ibrox following the recent Old Firm match.

In the strange snap, a “gorilla” shaped figure wearing a blue bib can be seen lurking behind Celtic manager Brendan Rodgers, who is being interviewed in the tunnel.

The image was posted on Twitter yesterday (Mon) with the caption: “Here, is that a gorilla just walking about Ibrox or am I tripping?”

The curious tweet unsurprisingly attracted a lot of attention on social media with nearly 1,000 retweets and over 1,500 likes.

The photo is a television screenshot taken from after the match between Celtic and Rangers, on New Year’s Eve. 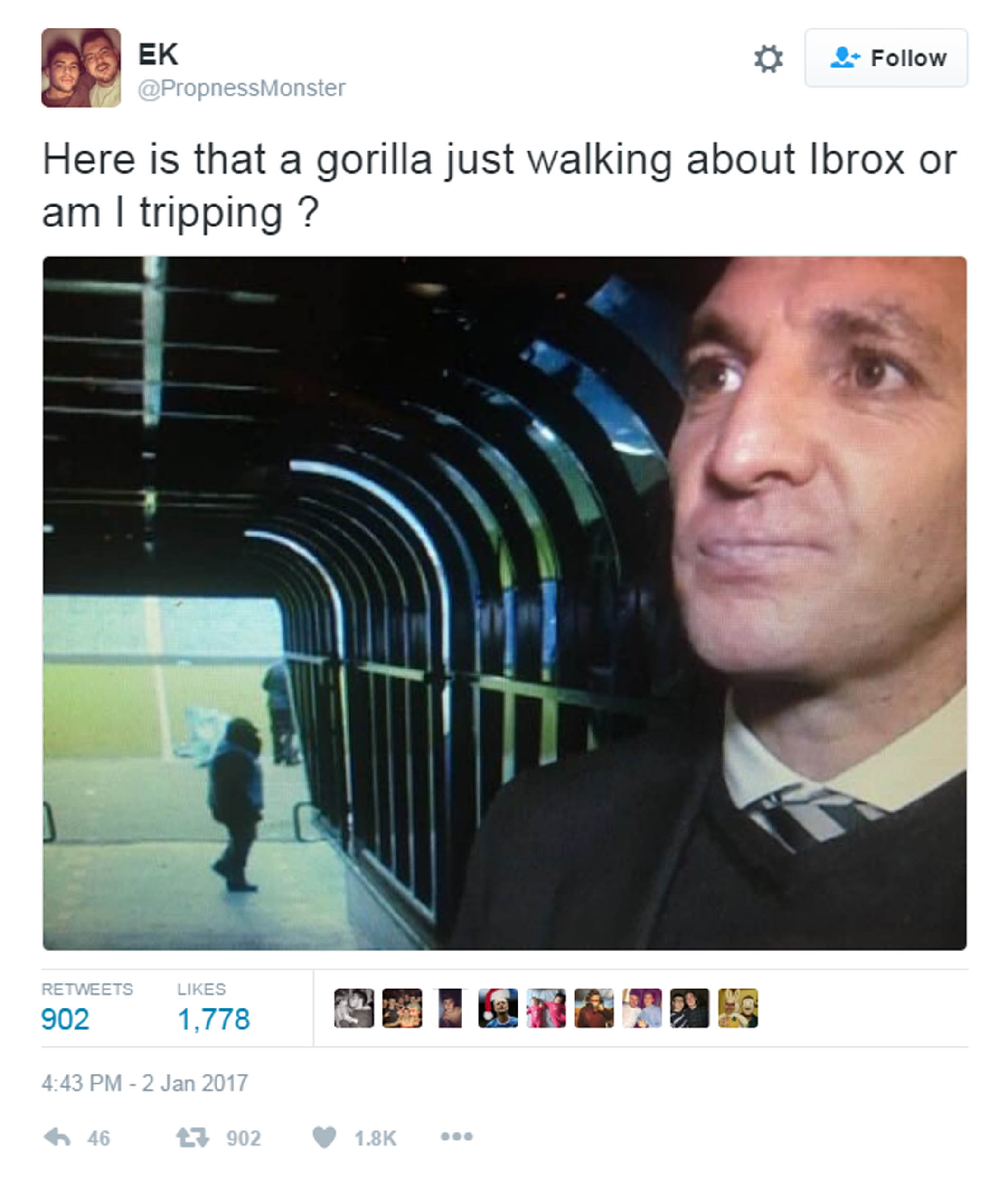 It shows the gorilla-like figure walking pitchside, as the lighting in the photo creates the perfect silhouette of one of the primates.

The picture has provoked widespread discussion online, with some users even suggesting the “gorilla” could be Harambe.

Harambe was a 17-year-old western lowland gorilla who became an internet sensation after being shot at Cincinnati Zoo when a young boy climbed into his enclosure in May last year.

Writing on Twitter, one user said: “Harambe has returned”, whilst another added “Harambe loves Rangers.”

One tweeter joked: “I don’t want to laugh at that but I have no choice. That’s bang to rights that.”

Harambe’s shooting in May 2016 was controversial, with many saying the gorilla would not have harmed the child who fell into his enclosure.

Since then, he has become a viral meme sensation and was even included in Public Policy Polling for the US Presidential election, polling at 2%.

But Cincinatti Zoo said in August that they wanted online jokes to stop.

Thane Maynard, Cincinnati Zoo director, said: “We are not amused by the memes, petitions and signs about Harambe.

“Our zoo family is still healing, and the constant mention of Harambe makes moving forward more difficult for us. We are honoring Harambe by redoubling our gorilla conservation efforts and encouraging others to join us.”

Celtic defeated Rangers 2-1 in their fixture on December 31 after goals from Moussa Dembélé and Scott Sinclair.