JONATHAN BROWN has revealed that former Hearts hero Ryan McGowan has been training with Bonnyrigg Rose in the build-up to their fairytale clash with Hibs – yet has barely mentioned his own Scottish Cup exploits.

However, the Rose star insists he will never stop talking about it if the Midlothian minnows can somehow stun the holders at Tynecastle today.

McGowan has been working with the Junior outfit to keep his fitness up during the close season in China, where he is on the books of Henan Jianye. He has been a regular at Bonnyrigg’s games, even cheering them on during their famous 1-0 win over Dumbarton in the previous round. 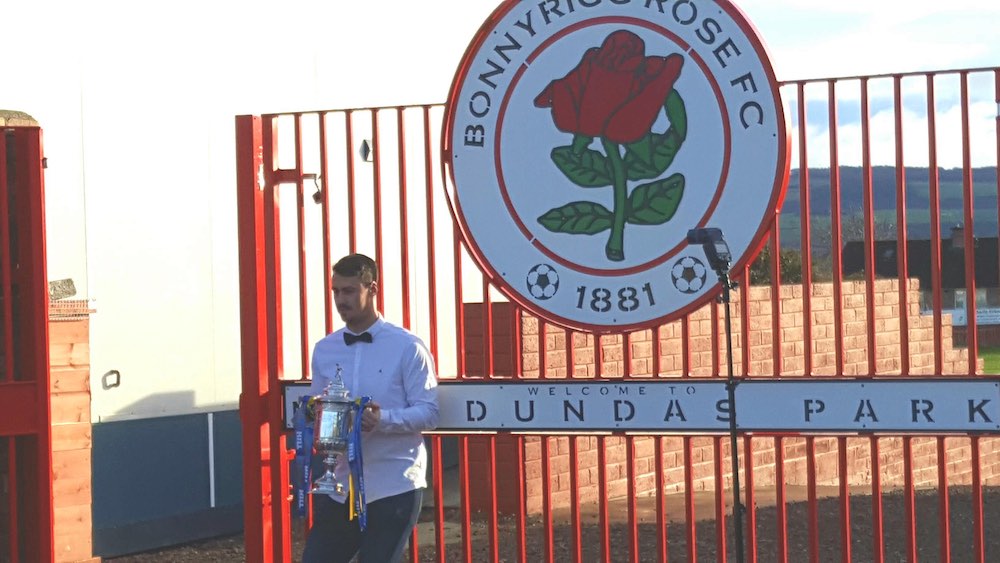 It is a competition the big Aussie knows well, having famously scored in Hearts’ 5-1 demolition of Hibs in the final of 2012 – but it is his pals in the Rose camp who will be out to make history this afternoon.

Brown said: “Gowser [McGowan] has been training with us for the last few weeks, which has been great.

“He’s got a bit of Scottish Cup history himself! He’s actually quite laid back so, although people might not believe it, he doesn’t actually mention winning the Scottish that often to the boys. However, when you put him in front of the press he loves a bit of the 5-1 chat!

“He was at Hearts with me and Johnny Stewart, who plays in midfield for us, and he came along to support Bonnyrigg at the Dumbarton game. He tries to get along to watch us and has always been a good mate and influence.

“This game is just as massive for us. Gowser might not talk about his 5-1 game much, but you’ll never get me to shut up about it if we manage to beat Hibs on Saturday!”

On his chances of a McGowan-style strike against the Hibees, Brown laughed: “It would be my first goal in about two years – so it would be a good time for it!”

Brown’s friendship with McGowan was fostered in the youth ranks at Hearts, during the tumultuous reign of Vladimir Romanov.

A talented generation of players including Brown, Mark Ridgers, Conrad Balatoni and Johnny Stewart – now also at Bonnyrigg – were largely overlooked as the Jambos pursued big-money imports and Lithuania talent.

Looking back on his five years in Gorgie is a bittersweet burden for Brown, who will always cherish his apprenticeship at Tynecastle yet regret that he was never given an opportunity to play for the club amid a “crazy” period of their history.

He continued: “I enjoyed my time at Hearts. I learned a lot, I definitely saw a lot. It was during the Lithuanian ownership and there was a lot going on that could make things challenging.

“It was a crazy time. You had your managers coming in and out all the time, and you had the same with the players. There was a lot of disharmony with the older Scottish players – guys like [Paul] Hartley and [Steven] Pressley.

“As a younger boy, you sit in the dressing room, stay quiet and just sort of take it all in. Now, being older and having been around a few other clubs to compare it with, I can say that was pretty manic.

“You’d go into training and there would be four new Lithuanian lads there, you’d play a reserve game and be in the same team as someone you had never met before . . . I was there just trying to guess their name!

“You could have a joke about it but, at the same time, a lot of the boys were unhappy about the ways things were going.

“It was a lot more tough for a young player to get a chance compared to what they get now, but Hearts were good to me for five years and I would never have a bad word to say against the club.”

So it will be a poignant moment for Brown when he steps on to the Tynecastle turf today – and an opportunity he intends to make the most of.

He added: “It doesn’t get any better than this, especially with the fact the stadium is a sell-out. I just can’t wait and I know all the boys feel the same – it’s been like that since the tie was announced.”