A VETERAN seaman has created a terrifying compilation video of the scariest moments from his career on the North Sea.

Graeme Hately is chief officer on the rescue vessel Grampian Protector which works in the some of the roughest waters on earth.

The 30 seconds of incredible footage was captured on two Emergency Response and Rescue Vessels (ERRV) which look after oil platforms and try to keep other ships away from them.

The video is called “Ultimate Big Wave Compilation” and “30 seconds of mayhem at sea”.

To the soundtrack of Robbie Williams’ Heavy Entertainment Show, the clip opens as lightning flashes in the sky above Graeme’s ship.

Crew members are shown being forced to stand at 45 degree angles as choppy seas throw the boat around.

Waves of over 30 ft high are then shown almost swallowing the vessel up while onboard cameras are constantly completely covered by waves.

In one scene, crew members are shown sliding from one side of a sofa to another while sat inside the deck and riding out intense weather conditions. 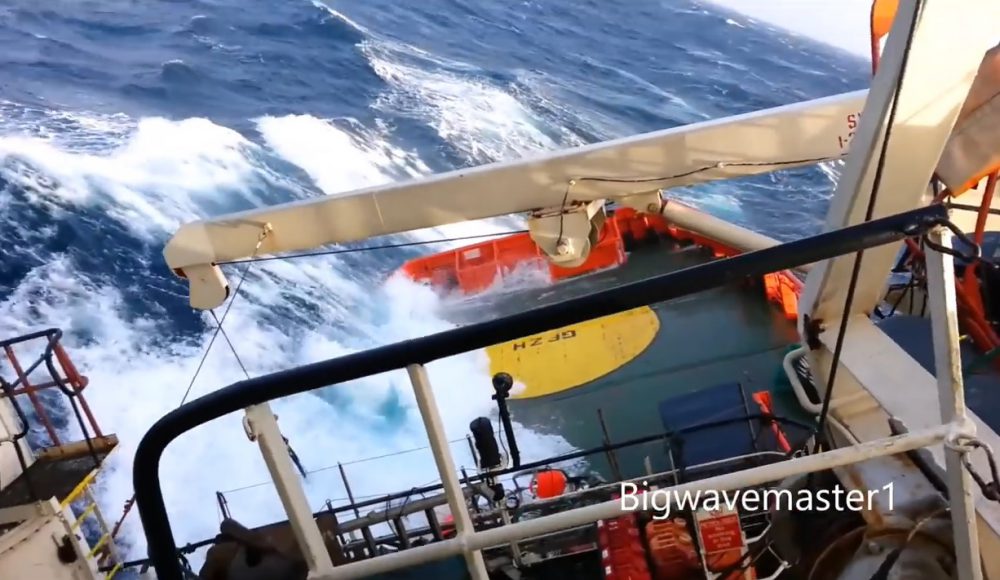 The clip, uploaded under Graeme’s YouTube account Bigwavemaster1, has attracted almost 7,000 views since being uploaded in November.

Dozens of viewers commented under the video saying they feared at times the boat was going to end up completely under water.

One wrote: “I thought you were gonna go under at 0:08”, to which Graeme replied: “You’re not the only one. We were watching fish swim past the port hole.” 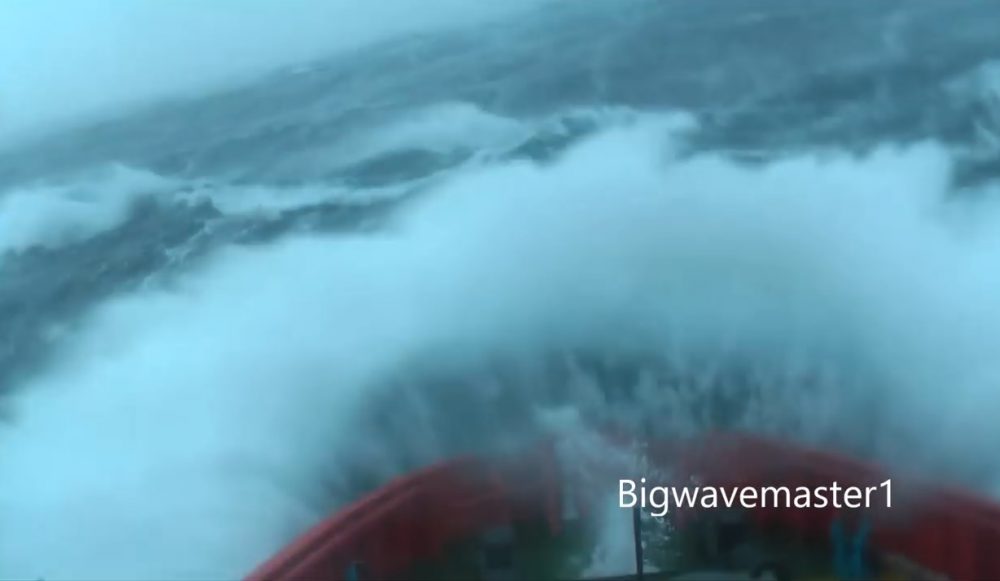 And one keen viewer even wrote: “I would pay to do a job like that.I have always wanted to work on a ship.

“Nothing like the shuddering, rattling, rolling and random bangs a ship in rough weather makes, keeps ones attention focused.”

Graeme, from Awsworth, Nottinghamshire, has worked in the industry for more than 37 years, and has spent the last 27 on emergency response ship.

He has also recorded other marine events such as a giant wave hitting a ship which has attracted more than nine million views. 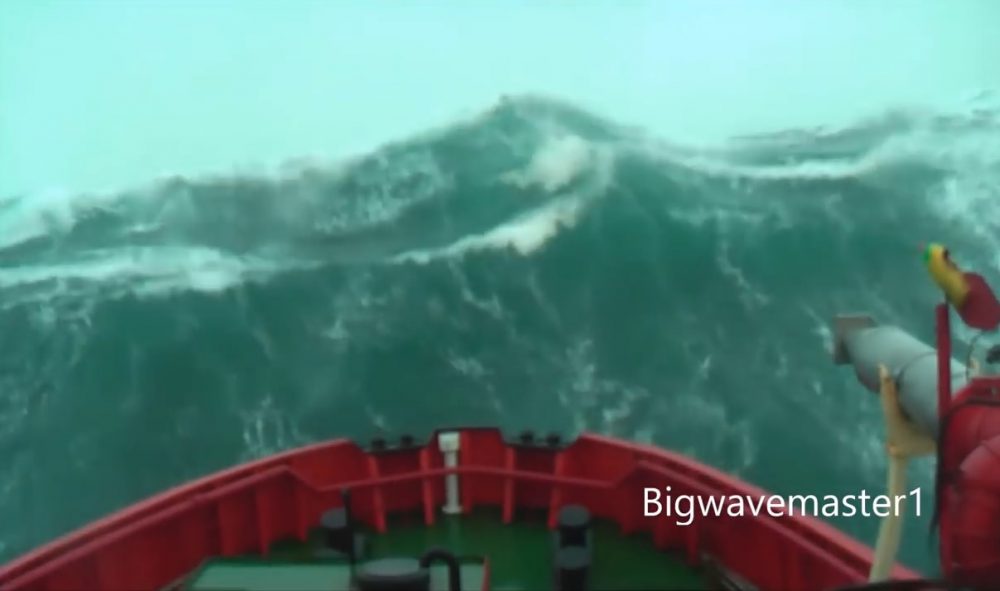 Writing to his YouTube viewers, the 50-year-old said: “All of this video was filmed on board two ships in the North Sea where we regularly have waves over 14m and wind above 100 knots.

“We don’t get any choice about sailing into these conditions, it is our duty.”

He added: “Usually it’s best to turn the senses off. May go mad with worry.”
Speaking today, Graeme said: “In the scene where it looks like the ship’s capsizing, the conditions weren’t actually that bad.

“The worst ones I don’t actually film because I don’t want to be blamed for not paying attention if anything goes wrong so the cameras are put down. 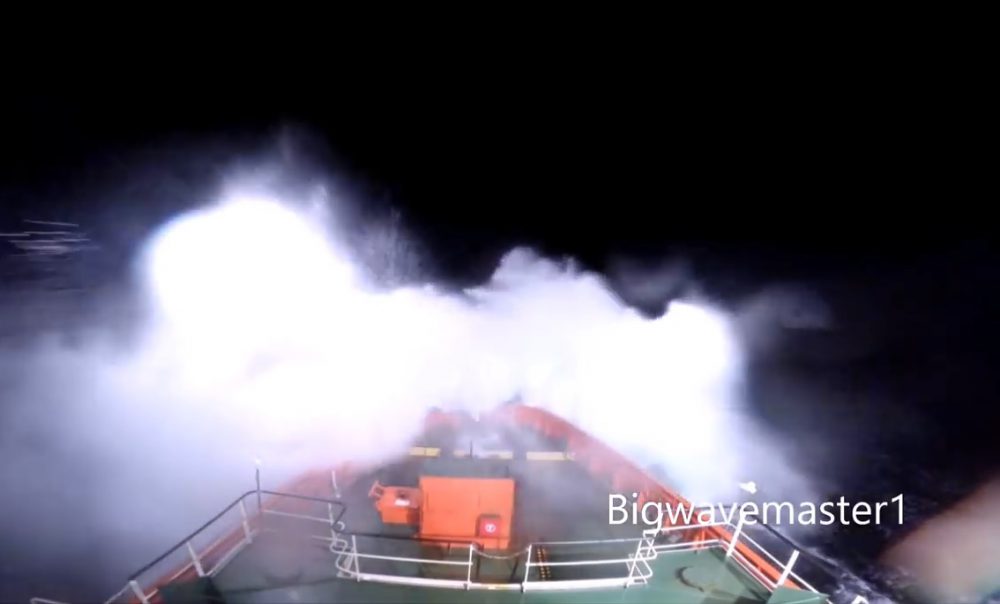 “In the last scene I think the waves got to about 20 metres high. When we’ve had bad weather in the past though they’ve hit around 27 metres.

“One cubic metre of water smashing down on the ship weighs a tonne and we get so many smashing down so you can imagine the vessel gets a lot of damage.”

Asked whether he ever gets scared out at sea, he responded: “There was the time when the conditions actually smashed the windows and the next day the weather got worse so every time we heard a bang you were thinking oh no. You have to just ride it out.

“If you think about what could go wrong you would never go out there. Sometimes you get the option to go under for cover but it’s more dangerous doing that.

“You end up learning to walk on a 45 degree angle so when you get on flat land again it’s an eerie sensation. Plus, being out there can make it hard to sleep, it’s too quiet.”