Scots rally to save iconic “granny” bread from oblivion

A CAMPAIGN has been launched to save Scotland’s most iconic loaf of bread from oblivion.

Mother’s Pride Scottish Plain is instantly recognisable from its wax paper tartan wrapping and has been on sale since 1958.

But “granny” bread faces an uncertain future according to social media users who are urging Scots to buy the loaf.

Glasgow DJ Kodie Blak claimed on Facebook that sales are falling and production at the bakery in Glasgow on happens during the day. 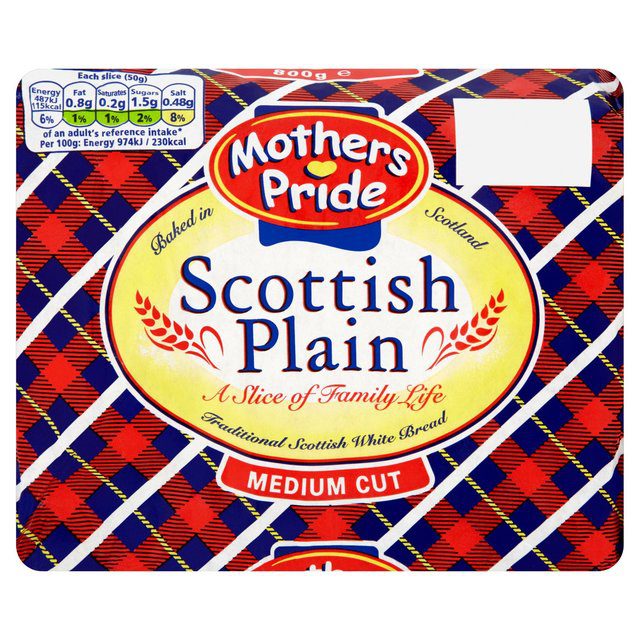 Hovis, the makers of the bread, did not contest him claims but today insisted they had no plans to stop making. They also welcomed the support of Scottish consumers.

Kodie Blak wrote on social media: “Help us save this loaf of bread. A favourite for many of us Scots.

“Glasgow is the only bakery now producing this bread and now because of falling sales, only a day shift remains producing it.

“So let’s get back to buying this old favourite. Nothing better than an outsider, buttered with a bowl of tomato soup. Quality munch.”

The post has since been shared almost 14,000 times in just two days and attracted over 9,000 likes.
Fans of the bread backed the campaign.

Alan McKinnon wrote: “WTF? It’s bordering on child cruelty to expose your offspring to this risk of ‘nae plain ever again’. It’s a national disgrace in the making. Sort yersels oot, eh!”

Lee Heighway said: “Please no. Love a plain loaf especially Mothers Pride. Get out and buy one today.

“Toast and fried egg just isn’t the same if it’s not plain bread.”

And Heather Carr even began trending a hashtag to save the bread, writing: “Granny’s bread I call this because I always got it at my wee granny’s in Glasgow.

“Thanks for this I’ll deforestation start buying from now on! #SaveScottishPride.”

The loaf already has an appreciation page on which fans post pictures of their favourite bread, usually toasted and slathered with butter.

One campaigner, Tracey Moore, even went as far as describing the product as a “Scottish legend, writing: “French toast can only be made using Mothers Pride Plain Bread anything less would be sinful and disgusting and should be outlawed. Save a Scottish legend.”

The plain loaf is traditional in Scotland and Ireland and is characterised by a dark, well-fired crust on the top and bottom of the bread.

There is no crust on both sides due to the unbaked loaves being stuck together in batches, baked together then torn into individual loaves afterwards.

One possibly reason for the apparent decline of the loaf is that it does not fit well in most modern toasters due to the greater height of the loaf.

Checks today showed that major supermarket chains including Tesco, Waitrose and Asda currently list the product, which normally sells for under £1, as “unavailable”.

The loaf, made at the Premier Foods factory in Duke Street, Glasgow, was the subject of controversy in 2014 when customers claimed it had got smaller. The company insisted there had been no change.

A spokeswoman for Hovis LTD said: “We know that Mothers Pride has a very loyal consumer base who are passionate about the Scottish Batch loaf and we have no plans to stop producing this iconic bread.

“However, we do love and appreciate the strong response of support we’ve seen from Scottish consumers.”