Defiant Hearts boss Ian Cathro has vowed that his team will not be lambs to the slaughter when the Tynecastle side attempt to halt the Celtic juggernaut on Sunday afternoon.

Hearts will bid to mastermind a feat that no other Scottish side has achieved so far this season, inflict a first defeat on Brendan Rodgers’ team.

Celtic have steamrolled their way through the Premiership so far, winning an incredible 20 of their 21 league matches – scoring an unrivalled 55 goals in the process.

In contrast, Hearts have struggled for form since Cathro replaced Robbie Neilson at the start of December and needed extra-time to see off Raith Rovers in the Scottish Cup on Wednesday.

But Cathro insists he will send his side out at Parkhead with the target of doing more than just trying to contain the runaway league leaders.

He said: “We’ve got no intention of being lambs to the slaughter.

“I don’t see any reason why we need to feel differently about that.

“Is it more difficult? Yes it is because it’s a better opponent.

“It’s the best opponent in the country. There are lots of things in their team – players, qualities, the model of play, all the work that has taken place –  that I think are excellent and pleasing to have in our country.

“But that doesn’t mean that I’m just going to sit and take it.”

Sunday’s televised outing at Celtic Park is the start of an exciting run of games that also includes clashes with Rangers, Motherwell and city rivals Hibs in the Scottish Cup but Cathro, who has only masterminded two victories in seven, is relishing the challenge.

He added: “It’s great. They are good opportunities. They are challenges, but they are opportunities for us to grow and have more time with new players settling in and building relationships in the team.”

Hearts saw off competition from Hibs to land Stirling Albion striker Dylan Bikey on Friday but Cathro refused to elaborate on claims from Cypriot side Anorthosis Famagusta that the club have all but agreed a fee for former St Mirren striker Esmael Goncalves.

He added: “I was a little bit surprised about that (what was said about Goncavles).

“There are a few that we’re looking at.

“I would be very hesitant to talk in any more depth about that prior to certain things having happened.”

Hearts skipper Perry Kitchen, meanwhile, is focussed on tomorrow’s clash at Celtic but admits it is hard to ignore the hype surrounding the February 12 cup clash against holders Hibs.

He said: “I don’t really follow the talk but just hearing from guys in the dressing room about how important this derby game is and what it means to the fans, it is definitely exciting and it’s a game you want to be a part of.

“I’m looking forward to that but, obviously, we have a big one at the weekend first of all.

“It’s a big two weeks. Obviously Celtic is always a big game, then it’s Rangers and Motherwell and then Hibs, and that will be my first taste of that series.

“It is a big two weeks but it is one game at a time and we will go from there.” 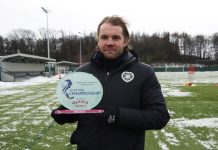