Hearts midfielder Don Cowie literally felt the full force of the fierce Edinburgh derby, but hopes an outbreak of football can help Ian Cathro’s side see off Hibs in tonight’s Scottish Cup replay.

The experienced Scotland cap was eventually forced off in the goal-less fifth round tie at Tynecastle ten days ago after a cynical body check from Darren McGregor left the playmaker with bruised ribs.

Cowie subsequently missed the weekend’s draw with Inverness but is desperate to be involved in this evening’s rematch in Leith as both sides eye a favourable quarter-final against Ayr United. 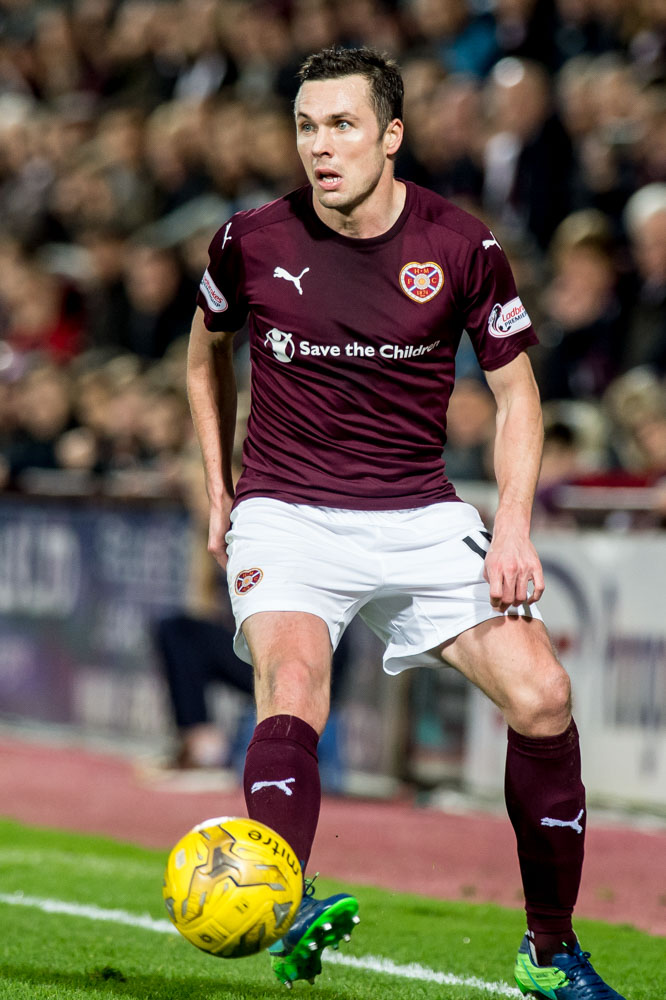 A rutted pitch in Gorgie was blamed for the first game becoming a war of attrition, and the 34-year-old insists Hearts will have another battle to win tonight if they are to let their footballing talent do the talking.

“No matter the game, the first 20 minutes are a battle,” insists Cowie. “You try and win that battle and then the football comes out.

“It may take 60 minutes for that to happen on Wednesday night, we just don’t know.

“But what is important is we stand up to it and when we get the chances to show our ability and our quality we make the most of it.

“It’s been well documented that the pitch is not easy to play on here. I’m sure for the neutral it was not very pleasing on the eye.

“Hibs were well aware of the surface and they played a longer game, a bit more physical. By all accounts, their own surface is a lot better so hopefully that will enable us to play more football.

“But at the end of the day it’s going to be a battle, no matter what. Especially the first 15 or 20 minutes.

“Hopefully we can win that battle and then that will enable us to play football and show what we can do.”

Cowie returned to training on Monday following the injury and despite the pain still lingering, he is hopeful of being given the nod by Cathro at Easter Road.

He added: “Hopefully I will be available for selection.

”It was my ribs. He is a big lad that ran into me. Did he apologise? I don’t think he thought he did much wrong. It was just one of those coming together things.

“I was struggling last week, but as each day goes by I am getting better.

“There’s been a few sneezes and things like that that have not been pleasant. I did fear it was cracked but it wasn’t.”

Cowie reckons Hibs pushed the legal boundaries during the uninspiring goal-less draw in Gorgie as Neil Lennon’s side produced a streetwise performance that was typified by former team-mate Grant Holt’s bustling display.

He added: “They probably played the conditions better than we did in the first game.

“They had big Grant Holt up front, who is experienced. He knows what he’s doing. He can win fouls.

“But we stood up to it and we probably had the clearer chances but were unable to take them.

“I played alongside Grant at Wigan and he’s not played in the Premier League for the years he did and not been on the verge of an England call-up if he didn’t know what he was doing. He’s a clever player and he plays to his strengths.

“I got on well with him at Wigan and we are still in touch now.

“It’s about having savvy and experience in these big games.

“But Hibs have got some very good footballers as well. But sometimes things dictate the way you play a game.

“They are a good footballing team and hopefully on Wednesday we will see a bit more of that.”

Cowie made his debut against Hibs last February as the visitors came from two goals down in the competition to earn a replay, which they won courtesy of a Jason Cummings strike.

But with nine new faces arriving at Hearts last month, Cowie insists they are not motivated by revenge against the cup holders.

He added: “I don’t think so because there has been such a change.

“The important thing is we just want to win the game. As a group, we want to start achieving things, whether we are at the end of our career, start of our career or the middle. You want to win trophies and this is a great chance for us to win a trophy.”