A hip flask disguised as a brolly – the perfect hack for surviving Storm Doris?

A MUM has gone viral after revealing the perfect life hack for surviving Storm Doris.
Hayleigh Quinn was on the travelling on the train for a family night out when her mum pulled out what looked like an umbrella.

However, 19-year-old Hayleigh was stunned when it was nothing to with the impending storms but in fact a “hip flask in disguise”.

Hayleigh, from Glasgow, uploaded two pictures of her mum’s secret drinking umbrella to Twitter with the caption: “F*****g howling, oot wi ma maw and she’s brought her umbrella which is actually a hip flask in disguise.”

It’s thought her mum bought the sneaky device from Amazon, with many Twitter users praising its ingenuity and asking where they can get themselves one.

Her tweet has since had over 7,500 likes, 1,200 retweets and countless more comments from amused users.

The first picture shows her mum sitting on the train whilst proudly holding out what appears to be a standard umbrella in front of her.

The bottle of Moet & Chandon and full champagne glass is a hint that there may be more to the pic, however, the umbrella looks like any other with a polkadot bag and usual rope tie hanging from the top. 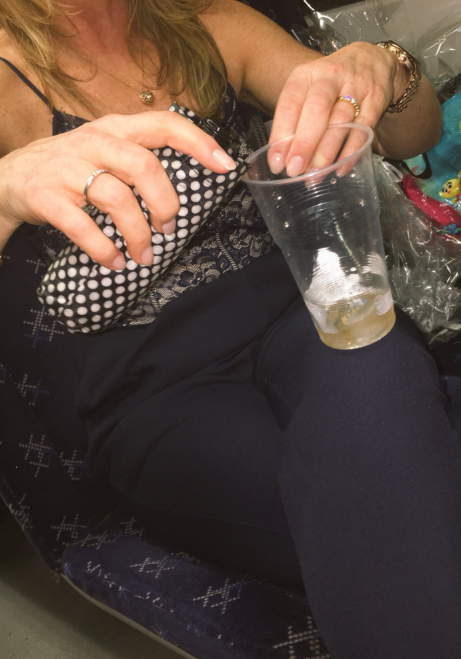 In the second pic, all becomes clear as the top of the umbrella has been taken off to reveal a nozzle and her mum is pouring herself a drink into a plastic cup.

Emma Louise wrote: “Oh my god, I have tears, howling.”

Vikki commented: “How good would that be for festivals?”

Pazzo wrote: “That’s brilliant as they banned me taking my prosecco into the theatre in London. Where do I get one please?”

Whilst Sophie added: “Oh my god, this is genius! Feel like my life’s been changed.”