DUNCAN Bannatyne has slammed a “scam” advertising campaign which is using his name and image to sell a money-making scheme.

It claims a source close to the businessman recently leaked the information, and boasts traders can make £1,000 a day.

Several of Bannatyne’s Twitter followers recently tweeted him to let him know that his name and image are being used in the ad, and the ex-Dragon’s Den star replied furiously.

Twitter user Paul Graham initially tweeted Bannatyne with a screenshot of the advert yesterday, with the caption: “What’s all this about Mr B?”

Bannatyne replied: “It is a scam using my name without truth.” 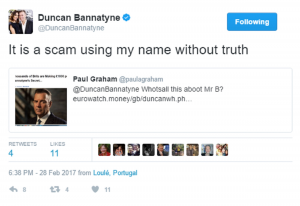 He added in a separate tweet: “And it is not my advert or an advert I agreed to.”

Sharon Marshall added: “Why must people do this. So annoying.”

Whilst Diane MW wrote: “Duncan if you got a fee every time it appears you’d be a billionaire! I see it all the time – seriously!”

It is unclear who is behind the adverts, although the company proposing the scheme claims to be called Euromarket.

An “option” in finanical terms is a contract which gives the buyer the right to buy or sell an asset at a set price on a specified date. A binary option is so-called because the payout is either a fixed amount or nothing.

They are banned by regulators in many countries as they are seen as a form of gambling.

Bannatyne is not the first famous Scot to become the face of a “scam” advertising campaign.

In 2014, TV presenter Lorraine Kelly police over adverts using her images without permission.

A weight-loss advertising pill advertised online claimed she took the product to help her lose weight – but she denies it.