COMEDIAN Joe Heenan has celebrated World Book Day – by sending his son to school dressed as Trainspotting psychopath Begbie.
Heenan, who is known for a string of visual jokes involving his offspring, posted a picture of his son in a white vest and fake moustache. The lad is holding his fist up and grinning. 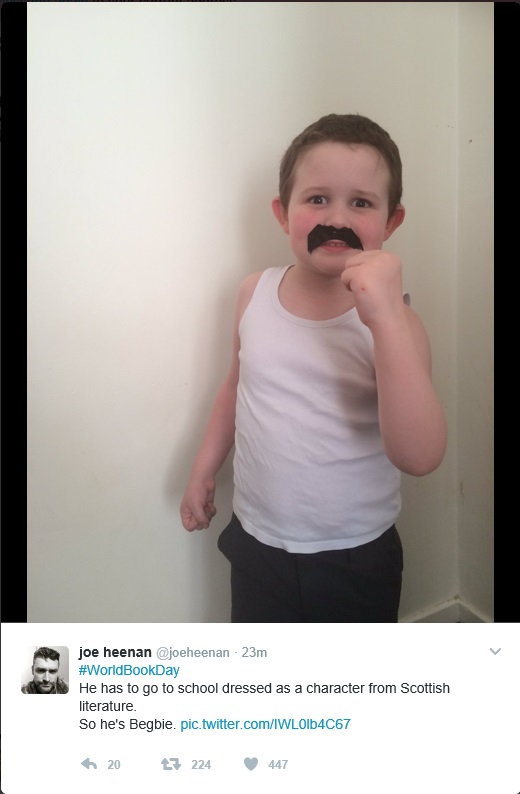 Heenan, from Perth, tweeted fans: “He has to go to school dressed as a character from Scottish literature. So he’s Begbie.”
On last year’s World Book Day, Heenan sent his children to school as an Argos catalogue. His son – page 89 – was holding a hair dryer and his daughter – page 165 – was holding a toaster. 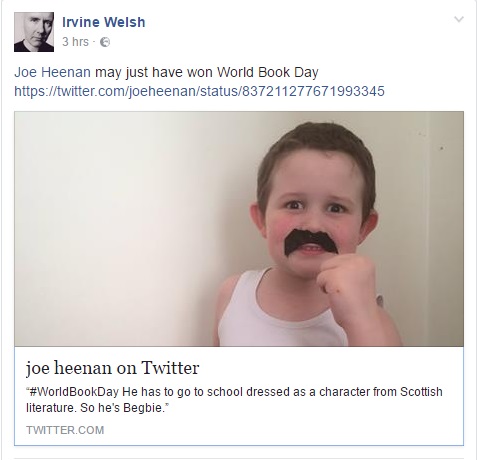 Responding to the father of two’s latest joke, fans tweeted about the photo.
@1truegreg said: “This could not possibly go wrong :-D”
@modchick61  tweeted:   “Laughed so hard on the train I nearly dribbled.”
? @LeanneWain commented: “Adorable little psycho.”
@SuzeManic said: “Hope he has his heroine [sic] packed in his lunchbox”
In  2015, Heenan gave his daughter an empty box of Miller’s beer as replacement school bag – a masterpiece that quickly went viral.
Last year  on  April  Fools  day the trickster played the ultimate prank on his children by giving them an iPad  – only for them to find the box empty.
Currently the post has been retweeted almost 500 times and almost 5000 likes.
Share
Facebook
Twitter
Pinterest
WhatsApp
Linkedin
Previous article“Can I make a cock?” 7,000 jokers sign up to attend cafe’s “make a clay chicken” event
Next articleForeign driver caught on mobile at wheel likely to evade tough new laws