Baffled JK Rowling told she “smells like an owl’s neck”

JK ROWLING has been paid the strangest compliment of her life after one of her followers told her she smelled like “an owl’s neck”.

The Harry Potter author was told about her supposed smell this morning (FRI) on Twitter.

However, an odd reply to her birthday wish came from one of her followers who told her about her distinctive neck smell.

@DolphineDaddy69 tweeted to Rowling: “You smell like an owl’s neck.”

Despite the unusual nature of the reply, Rowling took it in her stride, quoting the tweet on her page and adding: “Thanks.” 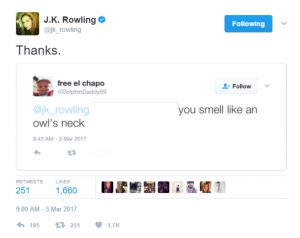 The author’s followers were quick to react to the strange compliment.

Musa Okwonga? commented: “That is poetry.”

Rowling replied: “Isn’t it? An image that really lingers.”

Sophie Heawood wrote: “I’d really like to sniff an owl’s neck but they’re hard to pin down. Perhaps I’ll just sniff yours.”

Luke Cutforth commented: “So you smell like 360 degrees of swivelling ability that’s not to be scoffed at.”

Whilst Sarah Fox added: “I’m sure owls smell lovely though – like knowledge and wisdom with a hint of autumn leaves.”