BRITAIN’S most optimistic workman has been filmed standing in a manhole in a busy road with just two traffic cones for protection.
A jaw-dropping dashcam video shows a car swerve round the man as he nonchalantly works away in a busy Edinburgh street.
Two traffic cones are perched right on the edge of the hole and appear to be there as much as a barrier as a warning to drivers.
The unidentified worker, who doesn’t even bother with a hard hat, has the top half of his body exposed and would likely have been sliced in half had he been hit by a vehicle.
The clip was filmed on a busy 30mph main road in the Craiglockhart area of the city last Monday and obtained by Scotland’s Worst Drivers.
A spokeswoman for the road safety website said: “This man either has a death wish, or is super optimistic.”
In the video, a Nissan Micra can be seen swerving to avoid hitting the man who can be seen rising from the manhole.
Apart from the cones, there is no sign to warn drivers of the presence of the workman or the open manhole.
The dashcam vehicle is also forced to swerve out to avoid the man, who at this point has turned his back to the traffic.
A spokeswoman for Scotland’s Worst Drivers said: “This workman is extremly lucky to be alive today. Why did he think that two single cones would be enough protection for him?
“No-one would expect to see a man sticking his head out of the road like this.
“With no signs on the approach, or any sign of warning, we are lucky that this was not anything other than a near miss.”
The driver who obtained the footage, who has asked not to be identified, said it appeared the man was feeding cable into the manhole and was working for a private company.
The man in the dash cam vehicle said: “I’m not sure about the company, but it was a private company.
“He looked like he was feeding in cable.”
Just last week, a workman had his arm amputated after being hit by a car and knocked down a manhole he was working on in Hemel Hempstead, Hertfordshire.
Back in 2013, a 37-year-old engineer died when he was hit by a car as he worked in a manhole in Glasgow.
It emerged today that the workman was contracted by major fibre network provider CityFibre, who said they would be suspending work pending an investigation.
A CityFibre spokesman said: “After an initial investigation, we can confirm that the construction worker shown in the video footage was working for KNNS, a CityFibre contractor. 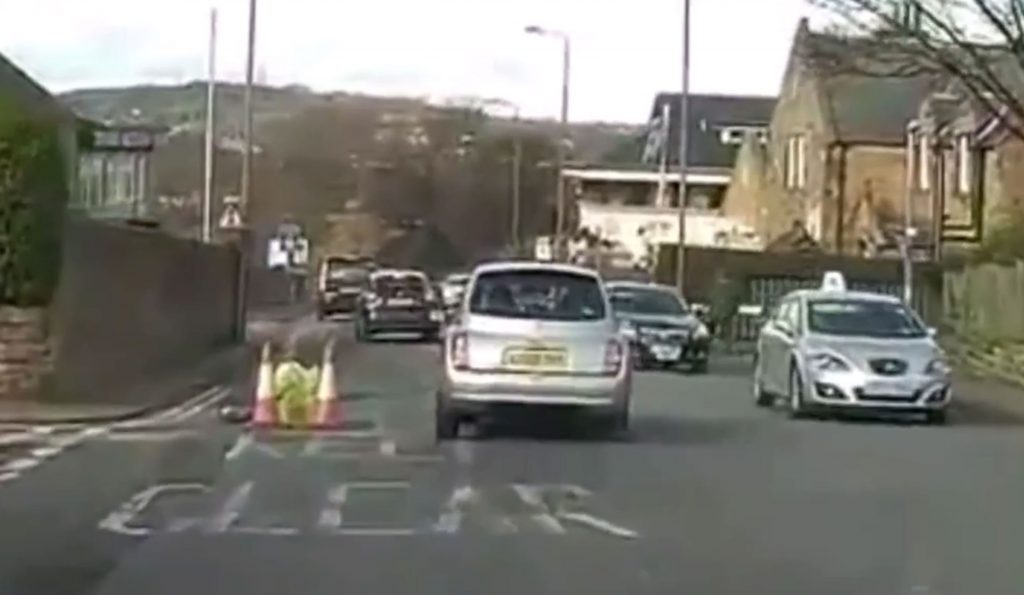 “We have now invoked an immediate stop to all KNNS works conducted on behalf of CityFibre until the incident is fully investigated alongside KNNS management.
“CityFibre takes its commitment to the health and safety of its staff, contractors and members of the public extremely seriously.
“We are grateful to the individual bringing this incident to our attention and have taken the promptest possible action to ensure it does not happen again.”
An Edinburgh City Council spokeswoman said the company had not registered the work and was not carrying it out in accordance with traffic management.
She confirmed the council had contacted the company.
Councillor Lesley Hinds, Transport Convener for the City of Edinburgh Council,
said: “We have written to CityFibre condemning this case in the strongest terms and requesting that they immediately carry out a full investigation.
“CityFibre have suspended all works being carried out in Edinburgh by the contractor shown in the video while this investigation is carried out.
“This is a very alarming case and we are grateful to the media for alerting us to it – the Council had not been notified about these works on the road.
“As can be seen on the footage, this was maintenance work being undertaken in a dangerous manner both for the operative and for the public travelling on the road.
“There was no proper traffic management in place and the operative was clearly at very real risk of being seriously injured or even killed.”
A spokesman for KNNS said they would not be giving comment at this time.
Share
Facebook
Twitter
Pinterest
WhatsApp
Linkedin
Previous articleHibs chief executive Leeann Dempster warns fans will be banned if they’re caught using pyrotechnics
Next articleSt Mirren boss Jack Ross insist avoiding the drop would be bigger than beating Celtic