A PHOTOGRAPHER has captured the rare and dramatic moment a humpback whale leapt from the waters of the Forth – barely 150 metres from land.
The series of pictures show the magnificent 40ft whale twisting and turning as it throws itself out of the water.
Sightings of humpback whales are relatively rare in UK waters and it is extremely unusual to see one putting on a display so close to land.
Photographed around 150m off the coast of  Kinghorn, Fife, the once endangered mammal was seen playing in the Firth of Forth.
Known for their spectacular leaps out water and distinctive tail fins, the whale spent almost six hours performing the incredible acrobatics.
In a series of stunning images, the animal is seen propelling itself from the water, known as breaching, before splashing back down.
The sea creature was snapped by David Tommy Thomson, from nearby Pittenweem, Fife.
The 44 year-old shop manager said he was in “awe” of the marine mammal and it was “amazing” to watch.
He said:  “I was in absolute awe when I seen the whale breach,  it  was amazing watching something  that  weighs 35 tonnes propelling its self out of the water.
“I had previously seen the whale one morning from the road on my way to work.
“But this was the first time I had gone looking for him.
“I spent nearly six hours watching the whale, it’s been in the area for over a month
now and it was over 150 metres off the coast.” 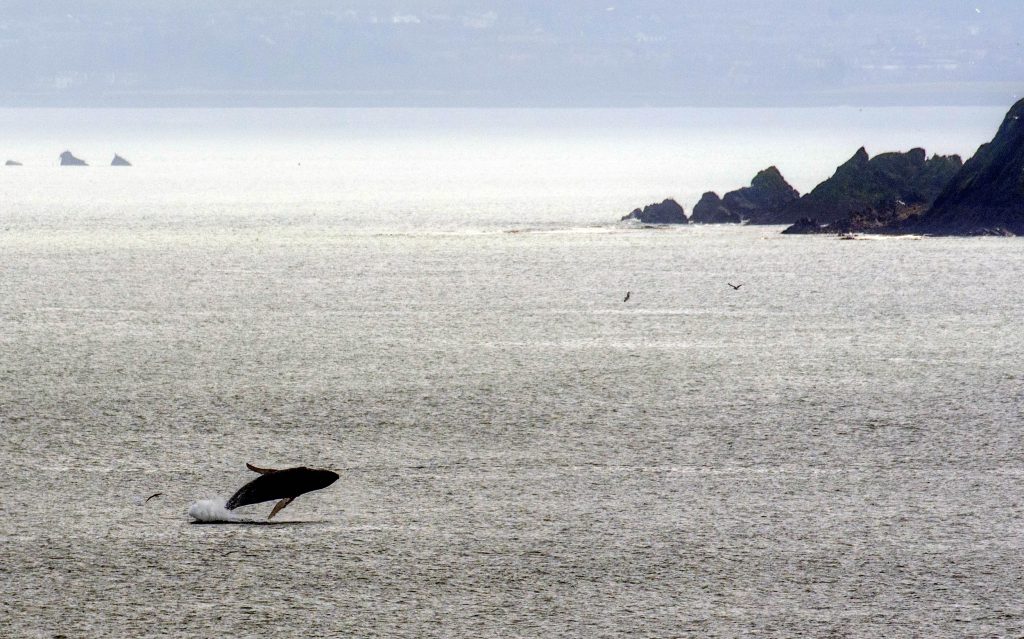 Earlier this year divers were called out from the British Divers Marine Life Rescue (BDMLR) charity amid concerns a whale  – believed to be the same animal – had become tangled in a fishing net.
However, after closer inspection the there was no sign of the whale, which is believed to be male, being in any difficulty and it appeared to be in good health.
The whales breach for a variety of reasons, to relieve themselves of parasites,  to scare off predators and because they enjoy twisting, turning and smacking back into the sea.
Once clasified as an endagered species, the humpback whale was almost hunted to extinction during the 19th and 20th century, with global numbers shrinking to around 10,000 to 15,000.
However after conservation efforts, the population bounced back up to 90,000.
They are also known for their songs when looking for a mate, which can last for up to 20 minutes and can be heard 18 miles away.
Share
Facebook
Twitter
Pinterest
WhatsApp
Linkedin
Previous articleRaith Rovers manager John Hughes insists he will have a proper goalkeeper for visit of St Mirren
Next articleHas Warburton been spotted working as a train conductor?