THE mother of missing RAF airman Corrie McKeague alleges she was misled by police on at least five occasions – including a claim they had secured the landfill where his body is expected to be found.

The 48-year-old, from Dunfermline, Fife, took part in a discussion about errors in the handling of the case on Sunday night.

Corrie, 23, went missing five months ago on a night out in Bury St Edmunds, Suffolk.
It now seems highly likely he ended up inside a bin lorry and was dumped at a tip in Cambridgeshire.

Nicola, a serving police officer, said she was grateful the search was now taking place but said it should have started much earlier.

She wrote: “Sadly there is quite a lot of confusion with what we were told and what we are being told now.

“There is…a huge issue with the police claiming on live TV that THEY secured the landfill from the start and ensured no more rubbish was put on top.

“This is not true. They handed back the landfill and were done.”

Nicola said this was “regardless of my efforts in having the military talking to the assistant chief constable on my behalf begging them not to do this”.

Shortly after the gunner was reported missing, officers seized a rubbish truck which collected a wheelie bin from the area in which Corrie was last seen.

There were no traces of him and incorrect measurements were given of the bin’s weight, putting it at 11kg rather than the much greater weight later confirmed by detectives. 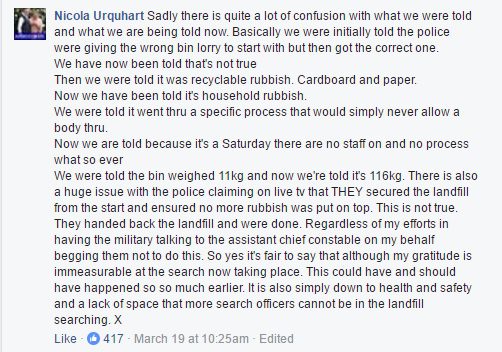 Nicola wrote: “Basically we were initially told the police were given the wrong bin lorry to start with but then got the correct one. We have now been told that’s not true.

“Then we were told it was recyclable rubbish. Cardboard and paper. Now we have been told it’s household rubbish.

“We were told it went through a specific process that would simply never allow a body through. Now we are told because it’s a Saturday there are no staff on and no process what so ever.
“We were told the bin weighed 11kg and now we’re told it’s 116kg.”

She concluded: “So yes it’s fair to say that although my gratitude is immeasurable at the search now taking place, this could have and should have happened so so much earlier.”
Corrie’s uncle, Tony Wringe, also hit out at Suffolk police, writing: “We begged the police to search the tip. They said no and never.

“Nicola pleaded with them to at least secure the area. Again, no, they wanted to hand it back to the operator and that they did not feel there was any future value in holding the site.

“Through luck or judgement the waste site operator did not dump much/any more waste on that area of the tip – this was nothing to do with the police.

“Every minute they take to do this, there is a mother staring at her phone hoping for it to ring and praying that it won’t.

“This should have happened five months ago – permitting a full stop on the search activity because an excavator isn’t working seems perverse when there are so many instant options available to replace it.

“If this was the Chief Inspector’s son, do we think the search would have stopped for this?”
Corrie has been missing since September 23 last year following a night out with friends in Bury St Edmunds, Suffolk.

He was last seen on CCTV walking by himself into a dead end area known as the horseshoe.

Final traces of his mobile phone appeared to link it to the movements of a bin lorry making its way to the Cambridgeshire landfill site.

Police decided not to search the landfill at the time and chose to investigate other leads.

But earlier this month a mass excavation of the site begun after data revealed that bin lorry measurements at the time were recorded incorrectly.

The force said that have been investigating the most likely scenario while also carrying out work on other possibilities, with detectives checking and re-checking as is routine in investigations of this nature.

“Initial witness accounts indicated that Corrie may have tried to walk back to Honington,” said the force. “There was also speculation that something else may have happened to him – that he may have been taken against his will, or had willingly gone with someone else for example – and officers could not afford to rule out any of these options.”

They added: “The landfill site search was always one possible line of enquiry police were looking at, after it was thought Corrie’s phone may have been in the bin lorry, however it was only one of the possibilities.

“It was thought extremely unlikely that he went with his phone due to the information officers had at that time about the weight of the pick-up. Officers were told that the waste pick up from the area was just 11kg, and it was only through a comprehensive and persistent checking process by police that the information that had been provided was recently found to be incorrect.”

The force said the correct bin lorry was seized at the start of the investigation and work was done to see if there was any trace of Corrie within the vehicle or if the vehicle had been involved in a collision.

They added: “When an initial decision not to search the landfill was made we remained in contact with the site who had identified where the waste had been deposited. They placed nothing further on top of this. Had anything further been deposited we would have encompassed this in the current search.

“Painstaking work was carried out alongside searches, comprehensive CCTV examination and background enquiries to see what may have happened. The combination of the lack of CCTV sightings and witness information gradually ruled out many of the other possibilities but it was only by carrying out these enquiries – and the work to check the data provided – that this was found to be the most likely option.”

They concluded: “We remain committed to finding out the truth about what happened to Corrie, and work to search the landfill site at Milton in Cambridgeshire continues.”