A BUS driver pulled over and jumped out of his vehicle to tie the shoelaces of an elderly man he spotted walking by the side of the road.

A heartwarming image, taken by an amazed passenger, shows the kind-hearted driver taking care of the OAP in the middle of an Edinburgh street.

The man had been walking along the pavement, clutching onto a walking stick with his shoelace untied.

Fearing he could fall and trip, the driver, known only as Jackie, was photographed bending down and tightening up the laces as a bus load of passengers watched on.

Alongside the photograph, Leah wrote: “Kudos to the driver on bus 416 service number 3 for getting off to tie this elderly gentlemans shoe lace.”

The post has been liked almost 500 times and attracted dozens of comments from impressed followers. 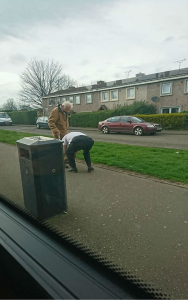 Jennie Brown said: “Good to see. Only takes two minutes but I bet this gentleman appreciated for rest of his day.”

Ryan Mcglone wrote: “Now that’s the type drivers I like to see on every bus.”

Greta Tiffney said: “Good on you. Still some good people in this world.”

And Stephanie Laptucha wrote: “Well done to driver. Such lovely thing to do.”

It’s not the first time a bus driver has been heavily praised for going above and beyond in their line of duty.

In May last year a Glasgow bus driver was hailed a hero after a video was shared showing him stop his bus to help an elderly man cross the road.

In 2011 another bus driver was praised for saving a toddler’s life after he spotted her suffering a seizure.

Former soldier Trevor McGarrity pulled over his bus and leapt into action when he saw 19-month-old Anna-Leigh McLean had stopped breathing.

The 46-year-old restarted her breathing and looked after her for 25 minutes until an ambulance arrived – sparking a huge round of applause from passengers on the bus.

Speaking today (TUE) Leah said of bus driver “Jackie”: “He is a lovely man and on the route a lot.

“Recently I was on crutches and Jackie would wait until I sat down until he moved off.

“Same with the elderly gentleman yesterday, he is always so nice and patient with passengers.”

Lothian buses confirmed the driver’s identity as Jackie Downie, from the Gorgie area of Edinburgh, and revealed he had been working for the company for 41 years.

A spokeswoman for Lothian buses said: “We’re very proud of Jackie for taking the initiative to help this gentleman, he is a true asset to our business and it’s great to see that his act of kindness didn’t go unnoticed.”

What are the technologies that transform the online sports betting industry?

Getting A Man With A Van Near Me Service