THE terrifying moment a driver comes within inches of colliding head-on with an out-of-control VW Golf fishtailing round a bend has been caught on dashcam.

In the clip, the Golf is coming towards the dashcam vehicle on a country lane when its back wheels lose grip and skid out on the opposite side of the road.

At the start of the video – called “Idiot VW Golf driver who can’t handle a bleeding corner” – the dashcam driver is on a narrow lane near Richmond, North Yorkshire.

The Golf can be seen coming round a bend up ahead and, as it turns, a skidding sound is heard, and the back wheels fishtail out, onto the dashcam driver’s side of the road.

The driver of the dash cam vehicle is forced to veer left onto a junction to avoid a serious collision.

He can be heard to shout “f****** hell” as he narrowly avoids the incident, and proceeds onwards cautiously at very low speed.

However, the driver’s rear view camera shows that the Golf passes right on to the right-hand side of the road, where it almost collides with a hedgerow. 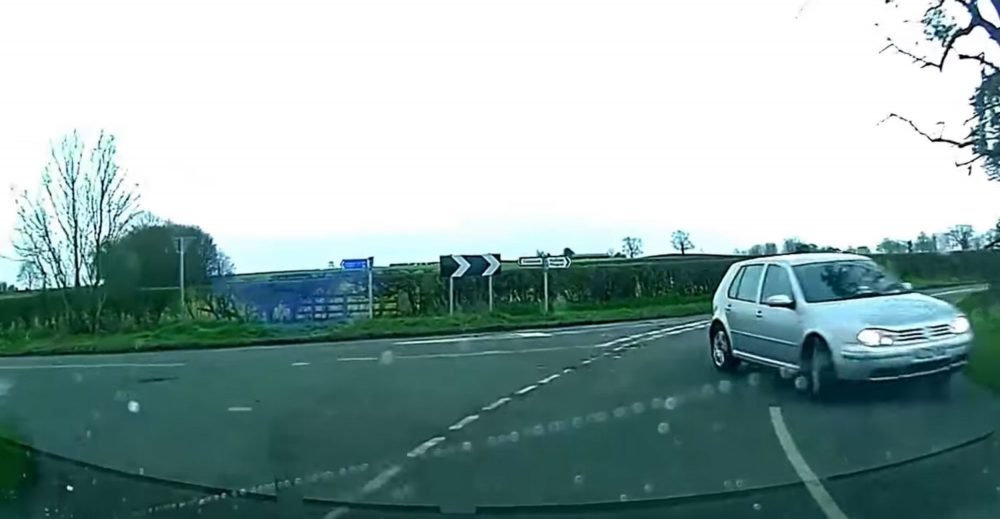 If a driver had been behind the dashcam vehicle, it would most probably have been involved in a potentially fatal head-on crash.

The man who recorded the clip said: “I was driving down a country lane getting towards a bend and then this Silver Golf decided to skid round the bend.

“The guy lost the back end, almost clipping me, and I swerved. No-one is hurt.”

“I’m only glad no-one was hurt and no-one was behind me, you can see why in the rear cam view.”