PARENTS on a Scottish island have taken recruitment into their own hands – after a local high school has been left without a headteacher for nearly a year.

Tobermory High School, on the Isle of Mull in the Inner Hebrides, has had two rounds of recruitment for the position since it was vacated in August, with no success.

And parents in the town, where children’s TV show Balamory was filmed,have decided to create their own campaign to help get the post filled.

In an online marketing push, members of the parent council have been posting colourful pictures of the town on social media sites, and have been using the hashtags #MoveToMull and #TeachInTobermory” to try and attract attention to the vacant position.

The campaign has received a huge amount of coverage, with one post being shared and liked over 3,000 times.

Speaking about the campaign, parent council member Dawn Reade said: “The first post was just a photograph of Tobermory with words saying we were looking for a new headteacher.

few people waiting for the job advert to go live.

“We are just trying to get as many people as possible aware of the opportunity.”

On Facebook, the post had hundreds of comments with many saying they would apply for the job. 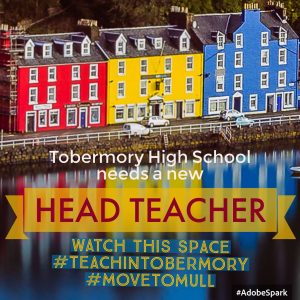 Estelle MacLean said: “I have a Masters in Education and an Administrative Credential and lots of high school experience. I would love to move to Tobermory!”

Chelsea Atkins added: “This is my most favourite place, I’d go for this in a shot, not sure the kids would come.”

Rhiannon Gage wrote: “Hopefully this is still available after I do my masters, dream come true.”

And Shona Reddiex referenced a character from the popular Balamory show by asking: “Surely Miss Hoolie should be first in line for the promotion?”

An Argyll and Bute council spokesman said: “This is a great opportunity for a head teacher to work with skilled staff and hard-working pupils to be proud of as well as to enjoy the benefits of island – living in one of the most beautiful parts of the country.

“We make every effort to recruit skilled staff and this post is being advertised both locally and nationally. The school’s parent council has provided information for the recruitment pack and is promoting the vacancy on its website and on social media, and we welcome their support in the recruitment process.

“Teacher recruitment is a national issue. We offer support, such as relocation packages, and have worked with in partnership with Argyll College, to offer a post-graduate Diploma in Teaching.

“An experienced depute head teacher who knows the pupils is currently in the post of acting head teacher.”

The job will be advertised on Friday, with a closing date of May 5.