Failing to get Hibs promoted back to Premiership would have left a ‘void’, admits Lewis Stevenson

A RELIEVED Lewis Stevenson admits his career would have been left with a ‘void’ had he not been part of the Hibs team that won promotion back to the Premiership.

Stevenson, the club’s longest-serving player, is one of only a handful who remain on the books from the squad that suffered relegation in 2014.

The horrible low of that play-off defeat to Hamilton Accies three years ago contrasted wildly with the euphoria of last season’s historic Scottish Cup triumph and with Saturday’s Championship title success. 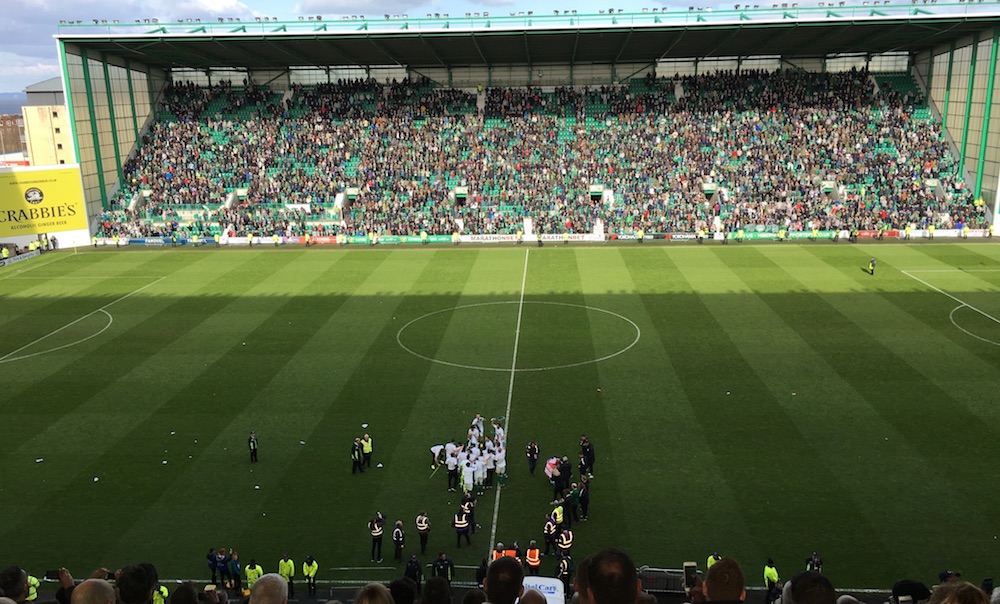 And Stevenson is thrilled to have been at Easter Road long enough to ‘right the wrongs’ of relegation and send Hibs back into the top-flight.

He said: “Is it joy or relief? A bit of both. I think relief comes into it. It’s been a long time coming, it’s been a bit of an adventure.

“We’ve come down and had some low moments but if you had told me we’d come down and win the Scottish Cup and get back in the third year I would probably have taken that.

“At times I probably did wonder if it would ever happen but if you see the support on Saturday [over 17,000], it was inevitable a club of our size was going to go up and I’m glad we are.

“I was part of the team that came down and I felt had to right some wrongs. I almost feel I have partly redeemed that by being part of team going back up.

“If we had not got promoted and I had left I would have felt a void, that I hadn’t achieved promotion.”

Stevenson, who is hopeful of agreeing a new deal to stay on for the club’s return to the Premiership next season, has already turned his attention to trying to reach another Scottish Cup final this weekend against Aberdeen.

And he has heaped praise on manager Neil Lennon for changing the mentality at the club and finally getting the Easter Road men back in the top-flight at the third time of asking.

The former Celtic boss has proved a hard taskmaster and been hugely critical of his team at times, but Stevenson is delighted.

He added: “Every day he moans and it is hard at times, but he does get the best out of you and we are winners this season.

“To be beaten only three times so far in the league shows the mentality we have, that we want to be winners.

“I’ve had a few [lectures from him]. It’s not pleasant, you do not want to get on the wrong side of him.

“He’s a winner and he wants us to be winners and he’s changed the mentality.

“We have got one this season and have a great chance of another bit of silverware, so now we can focus on that.”