MORRISONS are investigating claims by dog owners that their own-brand treat biscuits are contaminated with metal wire.

Thousands of worried customers took to the internet to discuss pictures which appear to show thin wire fragments protruding from Gravy Bones biscuits.

Dog-lovers complained the strands of metal could seriously injure or even kill their pets, and one even claimed it was a case of deliberate contamination.

The affected product is the 400g box of Gravy Bones biscuits, priced £1.

Dog owner, Amy Taylor, shared images on social media of thin metal wires, poking out from the dog treats that she bought from the Castle Bromwich store in Solihull in the West Midlands.

She claims that wires were found in every single dog bone that she checked from the box.

Her warning post has since gone viral, attracting more than 20,000 shares and thousands of messages from concerned customers.

Posting about the situation on Facebook on Tuesday evening, she wrote: “Huge warning to my friends on Facebook. The Gravy Bones from Morrisons have wire going straight through them.

“Have reported it to Morrisons and are taking the treats back ASAP.

“Very sharp, some are really long. Luckily my mum noticed although the dog has already had a few. It’s on almost every single gravy bone. Pretty scary.

“I’m going to tell Morrisons to grab a box off their shop floor I’m that confident! Plus look in the comments yourself you’ll see at least five plus people with the same issue.”

After seeing Amy’s post another dog owner, Deb Povey, from Blyth, Northumberland, checked and also claimed to have found wires in her box of biscuits.

She took to Morrisons Facebook page to share a photo of a bone with thin metal, wire poking out, writing: ”I read a post this morning from a friend of mine on Facebook about your own make gravy bones.

“She found wire was inside the said items so I immediately checked the one I had purchased a couple of weeks ago and found wire inside of ours also. 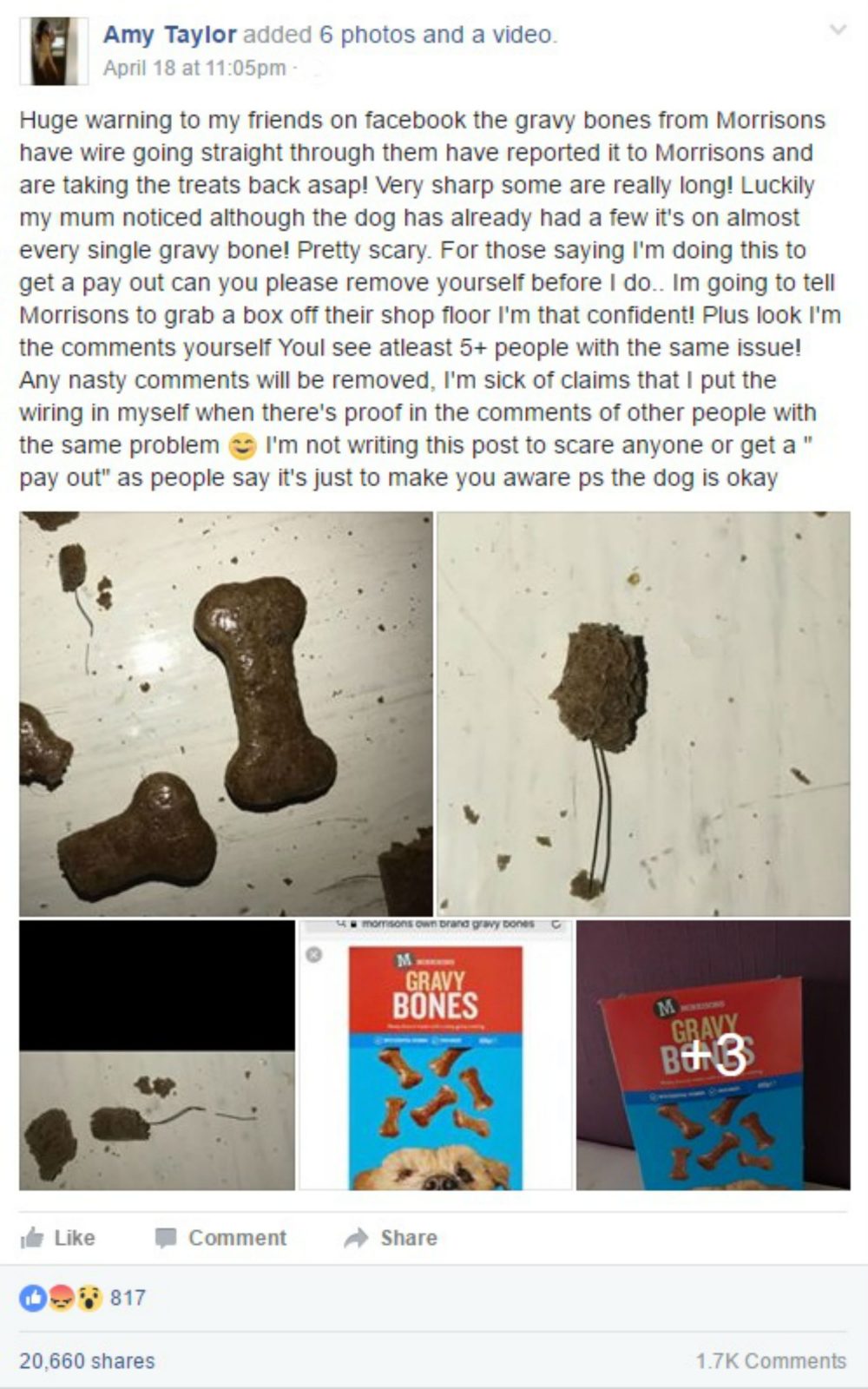 “I rang your complaints department and they told me to take them down to my store and to get the staff to take the others off the shelves which I did, your staff were very helpful and apologetic and took the other boxes off the shelves but I’m very concerned that they should be all taken off shelves throughout the UK as it’s clear that there is a quality control issue here.

“Just because it’s a animal food doesn’t mean they should have a lesser quality control as human food.
“My two Labradors had actually been sick a couple of times and even though I couldn’t swear to it it could have been down to the fact they have consumed metal wire within these gravy bones one of which is a 5 month old puppy.”

Other pet owners backed up the claims, saying that after checking, they too had found wire in the dog biscuits. 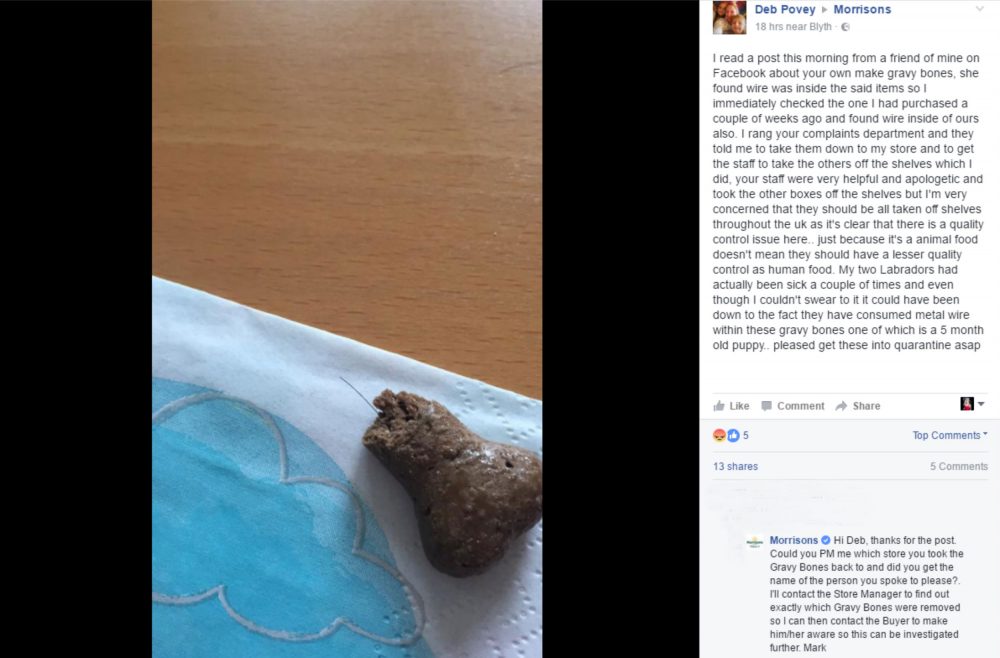 Toni Wood wrote: “All food making-factories have metal detectors the boxed products have to go through before it goes out to the supermarket.

“Now I know some small amounts have gotten through in various ways and in different items but this much metal in so many boxes I find very hard to believe.

“Foul play is definitely part of this.”

“Disgusting Morrisons haven’t put this in force. Thanks Amy love for sharing this.”

And Elizabeth Wilkes wrote: “Thanks for the warning I’ll hold off the gravy bones for my boy right now.

“Can believe they were even allowed to leave the factory like that and some sick person has clearly gone out their way to harm dogs by placing wire in these treats.

“Disgusting. Hope you get the explanation you want from Morrisons”

A Morrisons rep, known as Mark, responded online to the claims from one customer, writing “We are aware of the Gravy Bone situation issue and this is currently under investigation..”

Morrisons today confirmed they had raised the issue with their supplier.

A spokeswoman said: “We’re aware that a customer has found a foreign object in one of our dog biscuits.

“We take the safety of all of our products really seriously and are talking to our supplier and the affected customer.”