HOLLYWOOD star Martin Compston has become the butt of online jokes after sharing an image of his very Scottish recycling bin.

The actor intended to take a swipe at the Scottish Tories by sharing a picture of one of their election leaflets in his bin.

But followers were far more interested in the contents of the bin. Rather than evidence of celebrity-style alkaline, M Plan or 5-Factor diets, Compston’s bin is full of Irn Bru bottles and chip packets.

The 32-year-old Line of Duty star referred to a letter from Scottish Conservative leader Ruth Davidson, telling his Twitter followers: “Junk mail can be annoying but it’s important to recycle.” 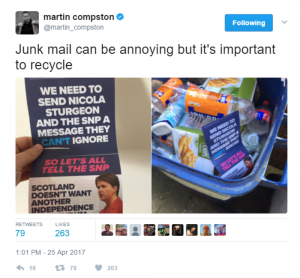 Dave Graham commented: “You need to cut down on the chips and fizzy juice fella.”

Whilst Supertim added: “That’s as Scottish a recycle bin as you would find.”

Tips For Buying The Perfect Sweatshirt For Women

6 Triggers for Refinancing Your Home Loan