HEARTBREAKING images show at least two seals beached on rocks and slowly being strangled to death after getting caught in illegal fishing nets.

The tragic creatures have been snared by monofilament netting which was banned a decade ago but has been floating in the seas ever since.

Two seals – both with horribly deep cuts around their necks – have been photographed lying on cliffs on the Isle of Noss, Shetland.

The distressing photographs show two white seals lying on their backs, side by side while blood stains can be spotted coming from cuts around the neck of one the tragic creatures.

Another image shows a grey seal, lying on its own, with netting digging so far into its neck it has cut right through the blubber and into the muscle.

The cliffs are too dangerous to climb and the only chance of saving the seals will come when the tides are high enough for rescuers to get in by boat. 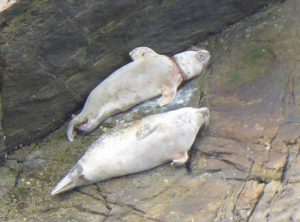 “Their injuries are from fine monofilament netting which is illegal now but there’s still loads washing up from the past.

“We get a lot the debris from the North Sea and in this case it’s cut through one of the seal’s blubber and right through into the muscle.

“The problem is they are inaccessible. We want to help them but the water was only about ten feet from them and the area was too dangerous to get to.”

The seals are currently being monitored by Scottish Natural Heritage wardens who will contact Hillswick when the seals are in a more accessible area.

Jan added: “The wardens there will keep an eye on them while they’re still going in and out of the water to get fish and get in touch when we can get out there.

“We need to get down there so if they would just stay out and basically let us jump them we could.

“The thing is, for people that have never handled seals, they are such powerful creatures and have these great big teeth so can be difficult to rescue.

“We see this over and over again. If we can all take a polythene bag and pick up anything they see that would that would help this from happening a lot.

“It’s time to take responsibility for what human waste is doing to our animals.”

The shocking scenario comes just months after 30 plastic bags were found in the stomach of a whale that had to be put down after being found stranded just off the Norway coast.

Monofilament netting, although banned for a number of years, is still used by some seamen resulting in pieces floating in the sea.

In the past Jan urged a complete ban on the product. She said: “This stuff is deadly, it even kills large marine mammals on a regular basis.

“There really ought to be a global ban on its production, let alone its use.”