THE husband of hen do plunge victim Kirsty Maxwell has revealed the money raised for his wife will be used to help families facing similar tragedies aboard.

Adam Maxwell said he also planned to use money left over from the £32,000 raised to bring Kirsty’s body home to get “justice” for his late wife.

Adam, 27, from Livingston, West Lothian, also told how his life may “never return back to normality” but that he will cherish the memories they made.

He also took the opportunity to describe Kirsty as having a beautiful soul with the rare ability to brighten up a room, just with her presence.

Kirsty’s death is still being investigated after she was found dead on April 29 at poolside at a hotel she was staying in during a hen do in Benidorm.

Thanking the public for their support this morning on the Bring Our Girl Home Crowdfunding, Adam wrote: “I just wanted to provide you all with a update on this simply incredible and kind gesture.

“We now thankfully have Kirsty back home with family in Scotland and are faced with the unthinkable task of planning Kirsty’s funeral.

“I know it was stated this fundraising page was created to help bring Kirsty home which was my main focus, however it will be used for much more than that. 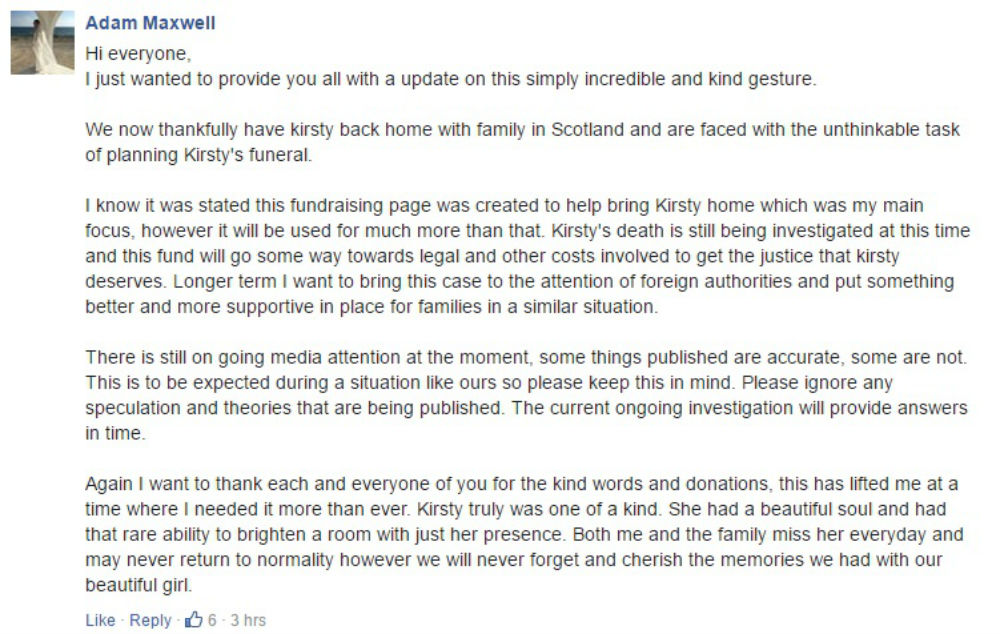 “Kirsty’s death is still being investigated at this time and this fund will go some way towards legal and other costs involved to get the justice that Kirsty deserves.

“Longer term I want to bring this case to the attention of foreign authorities and put something better and more supportive in place for families in a similar situation.

“The current ongoing investigation will provide answers in time.

Again I want to thank each and everyone of you for the kind words and donations, this has lifted me at a time where I needed it more than ever.

He added: “Kirsty truly was one of a kind. She had a beautiful soul and had that rare ability to brighten a room with just her presence. 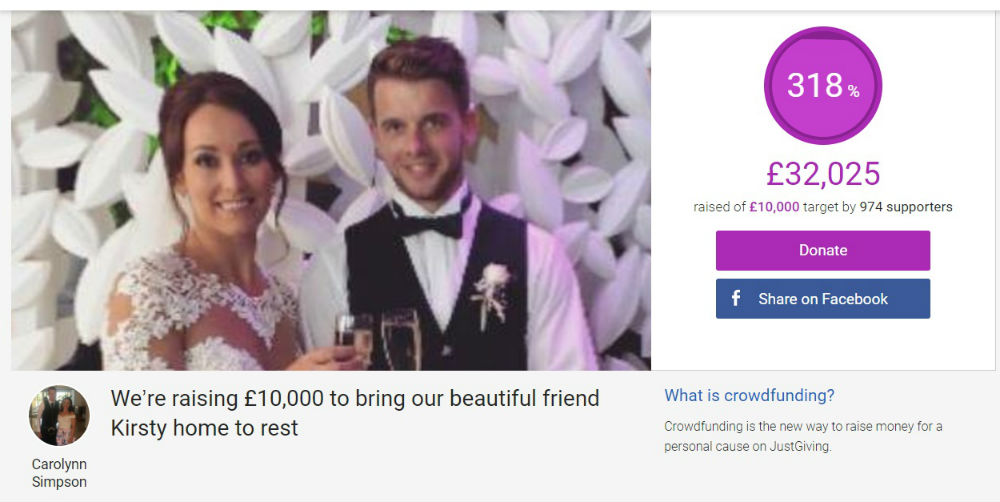 “Both me and the family miss her everyday and may never return to normality however we will never forget and cherish the memories we had with our beautiful girl.”

Kirsty’s father-in-law Andy Maxwell shared a message from husband Adam, on Sunday saying Kirsty will be “truly missed by all who knew her”.

The post read: “Kirsty was a wonderful wife, daughter, daughter in law, sister, cousin, auntie, niece and friend to many.

“She will be truly missed by all who knew her and we are deeply shocked and saddened by her sudden passing.

“Again I wanted to thank everyone for the love and support shown to both me and the family at this time. The response has been incredible and a true testament to Kirsty’s character.

“Kirsty’s death is still under investigation from the Spanish police and local authorities.

“After a very difficult period we now have Kirsty back home with family in Scotland. We are still trying to come to terms with loosing [sic] our beautiful girl.”

Alongside the post, Adam, shared a photo of himself and Kirsty, with her dressed in a pink top and he in a waistcoat, white shirt and tie.

Commenting on the post, friends offered their condolences to Adam and his family.

Maggie Curran wrote: “Poor Adam and poor everyone who loved and will miss her. Thank god she is part of so many of the happy and silly times of which there were many. A beauty and a sweetie.”

Donald Syme added: “Andy and Patsy, we are so saddened by this news. We didn’t realise that Kirsty was the girl in the news. Our thoughts are with Adam and all your family.”

Whilst Luke Thomas said: “Thinking of you all Andy and Patsy. If there’s anything we can possibly do please just say.”

And Liz Wright wrote: “So, so sad. Thinking of you all. God bless.”

Kirsty, who married Adam in September last year, is reported to have went to bed at 4am and woke up shortly before 8am.

She had apparently knocked on a door on the tenth floor, directly above the room in the hotel she was staying in with around 30 friends, shortly before her death.

Earlier this week, the lawyer representing the family squashed claims she had taken her life after she fell from a tenth-floor balcony.

Following her death, one of the five men, 32-year-old Joseph Graham, was arrested and taken to court but was later allowed back home.

However the Maxwell’s lawyer, Luis Miguel said the men, dubbed the ‘Benidorm Five’, had given conflicting accounts over Kirsty’s final moments.

He urged a judge to order a group of British men who were staying in the flat to return to Spain and face further questioning.

Crowdfunding on the menu for Scots hospitality tech firm