THE HEARTBROKEN girlfriend of missing RAF airman Corrie McKeague has a poignant first image of her baby bump.

April Oliver shared the black and white photograph on her Facebook account last night along with an emotional message to her baby.

The 21-year-old can be seen sitting on the end of a bed, cradling her large baby bump with her right hand while wearing a knitted jumper dress.

Her left hand is holding onto a pair of Timberland-style baby booties similar to the adult ones Corrie was wearing when he disappeared over seven months ago.

The fitness instructor had been dating Corrie for around five months before he went missing on September 24 following a night out with friends in Bury St Edmunds, Suffolk.

Along with the candid photograph, April shared an emotional message to the baby which is believed to be due late spring, early summer time.

She said: “I struggle with finding the right words because sometimes when you have to be strong and out on a brave face you forget about the precious moments that pass by.

“Yesterday was an emotional but exciting day, and sometimes it only takes one person to help you see what you have.

“I miss and love Corrie with every part of my body and little things set off different emotions. 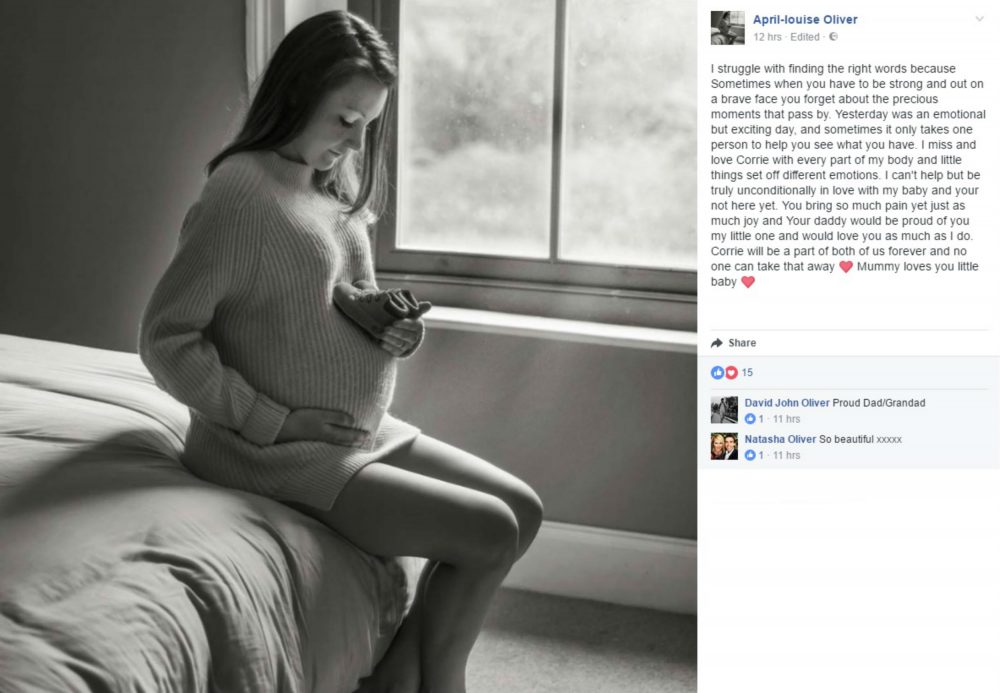 “I can’t help but be truly unconditionally in love with my baby and you’re not here yet.

“You bring so much pain yet just as much joy and your daddy would be proud of you my little one and would love you as much as I do.

“Corrie will be a part of both of us forever and no one can take that away.
“Mummy loves you little baby.”

April met 23-year-old Corrie on a dating website and have been seeing one another for about five months.

She discovered she was pregnant just two weeks later with the baby believed to be due in early summer.

After announcing her pregnancy April has remained relatively quiet only sharing a handful of images and posts about Corrie.

In March she shared a selfie of the pair during a day out together captioned “I miss you every second of every day.”

Search teams are in their tenth week searching a landfill site in Milton, Cambridgeshire where Corrie’s body is believed to be found.

At present they have failed to find any trace of the 23-year-old from Dunfermline, Fife despite shifting through more than 3100 tonnes of waste.

Police believe the Scot ended up in the back of Biffa bin lorry following the night out in Bury St Edmunds as his mobile signal last pinged near the landfill site.

Waste management staff had initially said that the bin weighed 11kg however it was later revealed it actually weighed 116kg.

The bin Corrie is thought to have been in is believed to have contained rubbish from a Greggs store.

Yesterday Corrie’s mother, Nicola Urquhart admitted she’s “concerned” police have been given the wrong information about her son’s whereabouts.

The new image was shared just hours after Corrie’s father, Martin McKeague posted an update on the search after visiting the landfill site for the eleventh time yesterday.

The 48-year-old, who sold his beloved Harley Davidson to travel back and forth from Scotland to the landfill, said he was sure Corrie was in the landfill.

But he also revealed his anguish over the fact that he may never find the 23-year-old at the landfill as the search of the site nears completion.

Earlier this week Suffolk police revealed they were extending their search of the landfill for atleast another week after failing to find Corrie in the original ten week time frame.

Posting the update on Facebook, Martin from Cupar, Fife, said: “Today marked my eleventh visit to the landfill site where the search for my son has continued over the last ten weeks.

“And maybe the hardest thing that Trisha and I are now trying to come to terms with, as we near the completion of the search effort within the extended parameters that have been set, is that despite the dedication and efforts of the Norfolk and Suffolk police forces there is a growing chance we may never actually find Corrie here.

“Now, let me be clear about what that means so that no one starts thinking my son is not somewhere in this landfill site, or that the police are somehow searching in the wrong place.

“He is there, and the police are searching in the right place. And any suggestion to the contrary simply does not marry up to the evidence.”

He added: “So while my son has not yet been found we’re not giving up hope. We’ll never do that.

“We’ll continue to let you know the facts about what’s happening. Thank you all for standing up and standing by us.”