THE city that informed the world that “Boris Johnson is a pure f****” has turned its irreverent attention to his boss.

Just metres from the spot in Glasgow where the legendary Johnson message was daubed, a sign now states: “Theresa May talks p***”.

The rude message, in red letters on a white background, was attached to metal railings in the Partick area of the city yesterday (TUE).

The political message was erected just yards from the same wall that showcased the message “Boris Johnson is a pure f****” in August last year. 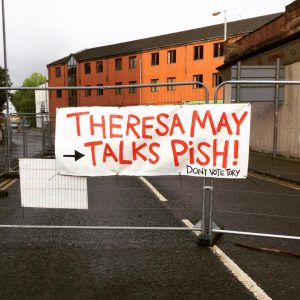 The new poster referring to the prime minister has humoured dozens of Scots who have taken to social media to comment on the message.

And Lorna Mckain said: “Wonder how long it will be left up there?”

The sign has prompted Scottish gift company, Lisa Donati to create a mug with an image of Theresa May along with the message.

Sharing a snap of the mug today, the company wrote: “’Theresa May Talks P***’.

“In the run up to the 2017 general election, Glasgow has spoken once more.

The same company also released “Boris is a pure f****” mugs last year after spotting the message nearby.

SNP firebrand Mhairi Black, who hopes to be reelected to Westminster on June 8, delivered a memorably Scottish insult to a Tory minister inside the Commons earlier this year. Most lipreaders are convinced Ms Black told Caroline Nokes: “You talk s****, hen.”