A TOP Scottish university has been forced into an embarrassing U-turn after claims it was snooping on students.

The University of Glasgow has been forced to removed ‘monitors’ that were fitted to desks around the campus – without telling students first.

The university claim they were part of a project to check how regularly the spaces were used.

But the university has admitted it only told staff and, following complaints from students, they have agreed to remove the monitors.

The news comes just two weeks after it was revealed Edinburgh University had fitted movement sensors to stop people hogging library desks, sparking complaints that it represented a ‘violation’ of privacy.

Posting on their own Facebook page today (WED), the University of Glasow wrote: “Monitors: In response to concerns from members of our community regarding monitors being used in study spaces we would like to clarify. 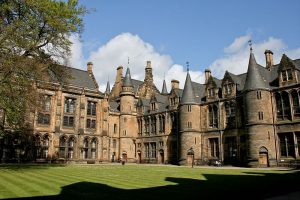 “A small number of monitors were fitted to desks in two parts of the university to help us understand when people used different spaces.

“This will assist us in planning for future campus development. The monitors recorded only that a space was occupied and did not gather any additional or personal information.

“Although colleagues were advised in advance that the study was going to take place and that it was wholly anonymous, some students expressed concerns and the monitors have now been or are in the process of being removed.

“We apologise for causing concern.”

However, some of the responses left in the comments section of the post have suggested that students and staff weren’t informed beforehand about the presence of monitors.

Ashli (CORR) Mullen, who is studying a PhD in Sociology at Glasgow, wrote: “’Parts of university’ – personal desks in researchers’ private offices. ‘Notified in advance’ – this did not occur, they were already installed when we discovered and were subsequently ‘notified’ of them.”

Sharon Grr commented: “Just to clarify, I was affected, a monitor was placed under my desk, and I was not consulted in advance.” 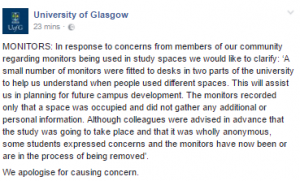 Karen Cuthbert added: “I was one of the affected colleagues and was not informed in advance. I looked under my desk and found it after receiving email that it would be happening.

“Also, it is misleading to call them “study spaces”. They’re personally assigned desks in locked offices of doctoral researchers.”

Whilst Glenn Calderwood joked: “If only those monitors had been in place in earlier decades with all those gruesome murders Taggart solved around the university.”

Edinburgh University recently fitted devices which can monitor movement, temperature and light to desks in their library.

The university suffered complaints that desks were being monopolised by students who leave their bags and books to secure their position in the library.

However, despite some students welcoming the moves, others claimed they had been left feeling that their privacy had been ‘violated’.

The most famous hunters in history

REVIEW – The Bubble Laboratory – The Adventure Bubble Show with Milkshake