SIMON MURRAY insists he hasn’t stopped thinking about relegation for the last 12 months – but believes Dundee United can now have promotion firmly in their sights.

The striker was part of the Tangerines side that slipped out of the Premiership last year with a painful defeat at the home of bitter rivals Dundee.

Born and bred in the city, and with friends on both sides of the football divide, Murray has not been able to escape the hurt of that failure. 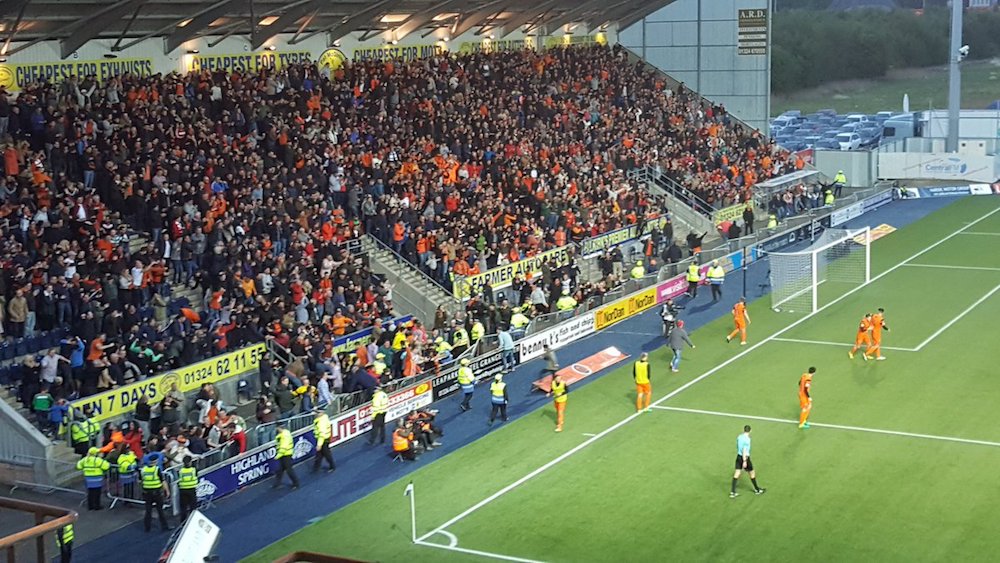 But, after scoring for the fourth successive play-off match to help the Tannadice men roar from behind against Falkirk in Friday’s semi-final triumph, the 25-year-old is relishing the chance for redemption against Hamilton Accies in this week’s final.

He said: “I think about being relegated all the time.

“I was part of the squad when that happened and I have had to live with it.

“There’s no escaping it, I get it from both sides.

“But hopefully we can get through these next two games, get the club back in the Premiership and I can give them all a bit back.

“The aim is to get back to the Premiership, that has been the aim from day one and we’ve got two games to achieve it.”

Murray’s determination earned him United’s equaliser 14 minutes from time in their 2-1 victory over Falkirk, with Paul Dixon’s deflected header giving Ray McKinnon’s side a dramatic winner two minutes from the end.

Murray added: “I think I was kissed by about eight men during the celebrations!

“It was mental but that just shows what it means to people.

“Scoring a goal and getting a reaction like that from the fans is something you dream about.

“It was a lot better feeling than being relegated, that’s for sure.

“It was the best feeling I’ve ever had in football when we scored the winner.

“But the job isn’t done yet, nobody is going to get ahead of themselves because we have two very tough games coming up.”

United were supposed to be tired out by having to see off Morton in the quarter-finals, but their strong finish against Falkirk was an indication they are well and truly up for their two-legged shot at promotion on Thursday and Sunday.

Murray went on: “They [Hamilton] will know they’re in for a game.

“Obviously they are the Premiership side and will be favourites to go through.

“But we know we’re capable of giving anyone a game and, if we play like we did in the second-half on Friday, then we’ll have a good chance of getting through it.

“We’re confident and we have momentum at the moment, which is really important at this time of the season.

“There is a great bunch of lads in our dressing-room, the morale is great and everyone is pushing to get the club back up.”