The swan was caught on camera with the duckling in its beak and thrashing the life out of it before.

Filmed by Greig Warren, the stunning white bird is seen with its head partially submerged under the water and furiously shaking.

The body of the duckling can be seen dangling from the swan’s beak and is clearly no longer alive.

24 year-old Greig from Kildary, Highland, filmed the short clip earlier this week on a nearby private loch while out rowing.

The start of the video shows the bird holding the duckling’s lifeless body underwater and thrashing its head about.

As the swan raises its lunch from the water it continues shaking the baby duck.

The swan is then filmed dropping the duckling in the water and picking it up again before throwing into the nearby grass.

Extending its long graceful neck the swan gathers up the ducklings remains and continues to eat its prey.

Eventually the camera stops filming as the bird carries throwing its meal around the loch.

Posting the clip online sercurtiy worker Greig said: “Who knew Swans were meat eaters! I believe it was a baby duckling. Some people might not like this, so if your offended easily I’d just skip past.”

Speaking about the clip Greig added: “I was shocked if I’m honest.

“I was curious as to what it was thrashing about, and when I seen it was what was left of a chick I thought it was a territorial kill.

“Then it started eating it. So not wanting to interfere with nature too much I cut the camera and just rowed the boat away from it, and left it to it and watched from a distance.”

Horrified viewers have commented on the video expressing their shock at the swans behaviour.

Caroline Hutchon said: “What a nasty beast, I would never have known although I get the impression if you get the road of them they aren’t the graceful bird from a distance Not that I intend to do. Poor wee duck.”

Ian Simpson commented: “Swans are very territorial and will defend their patch from any perceived threat, they can occasionally eat carrion, frogs, snail, tadpoles” 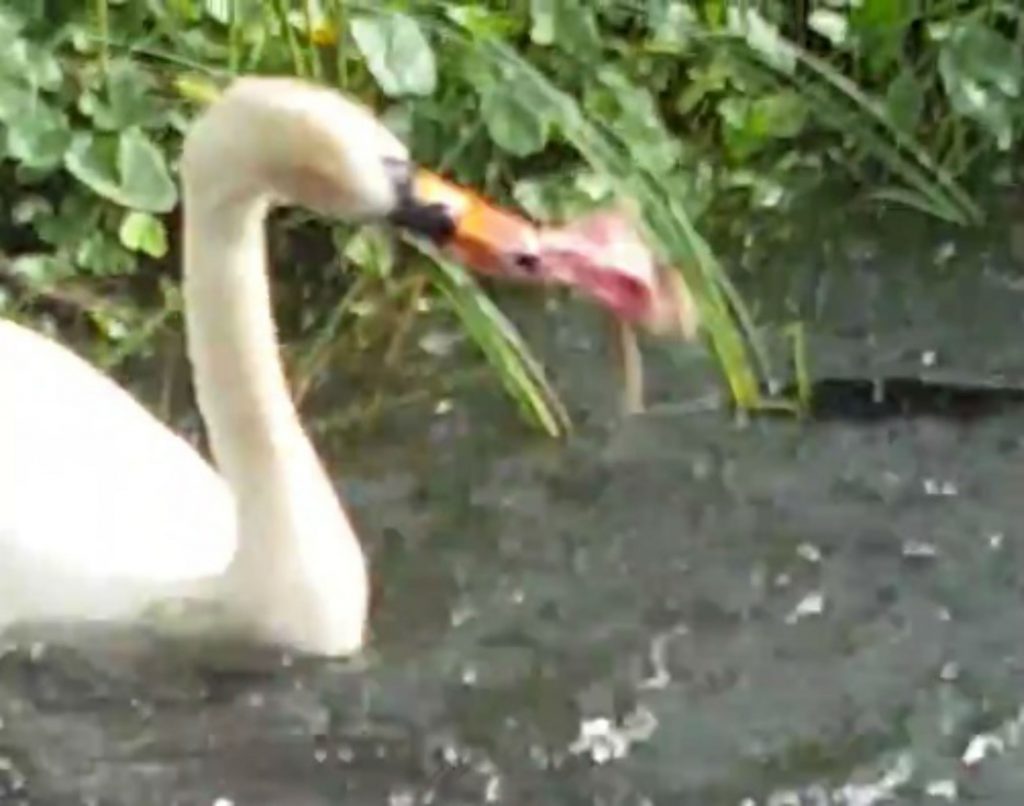 According to the RSPB website, swans will mostly eat aquatic vegetation, which their long necks allow them to lift from the riverbed.

However they are also known to eat the molluscs that cling to the vegetation, as well as small fish, frogs and worms.