HILARIOUS footage has captured the moment a chip shop owner took Domino’s to task – by dressing as Superman and holding a billboard next to theirs.

Joe Loia, owner of TJ Fryers chip shop in Airdrie, North Lanarkshire, became so fed up with Domino’s touting for business near their address that he decided to take matters into his own hands.

Domino’s have been using a man dressed as comic book character Iron Man to stand outside the TJ Fryers shop and advertise the pizza outlets offers on a billboard.

So the chip shop decided to follow suit, with 48-year-old Joe dressing as Superman before posing next to Domino’s Iron Man whilst holding a similar board with the TJ Fryers offers. 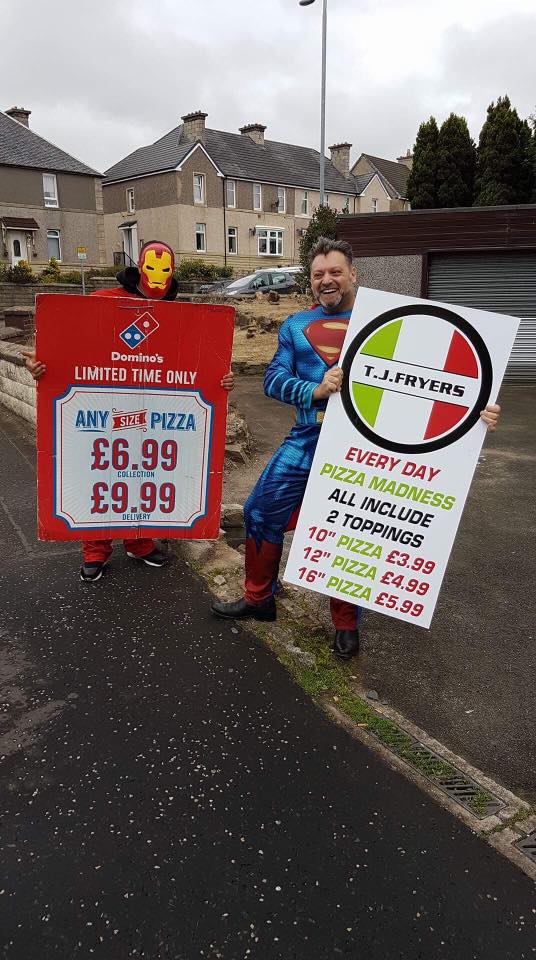 Joe claims the agency which employs the ‘Iron Men’ on behalf of Domino’s sent him a message suggesting that they would get lawyers involved if he didn’t take photos of their workers off Facebook.

After sharing photos of the Domino’s advertisers outside his shop, Joe posted a screenshot of the message which stated that “it is not funny” and that he didn’t “have confirmation to post something” with their staff in it.

Joe then uploaded an 18-second-clip to TJ Fryers Facebook page yesterday (THU) with the caption: “And the battle of the superheroes continues …”

The video starts as the TJ Fryers worker, dressed in a full Superman outfit with blue leggings and red cape, marches towards the Domino’s worker, who’s already in place and wearing an Iron Man mask. 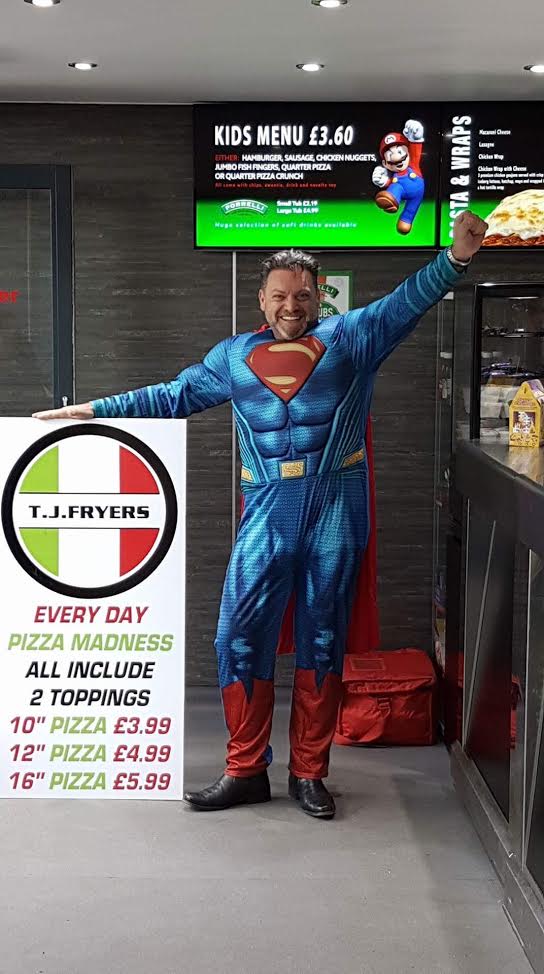 The pair then pose up next to each other, holding their respective billboards out in front, whilst one of the chefs from the chip shop takes photos.

Joe then says: “good stuff” as the pair pose next to each other for further photos before the two ‘superheroes’ go their separate ways.

Speaking today Joe said: “Initially a couple of guys came in to use my toilets. They were wearing Iron Man masks so I was thinking ‘what’s going on here?’

“Then I saw them walking up and down outside my shop with these Domino’s billboards. Then that night we got really busy with pizza orders because people thought it was us.

“Then the company who employs them on behalf of Domino’s sent me a message on Facebook about not sharing pictures of them on Facebook so I thought it was time to get the boxing gloves on and had my own billboard made up and dressed as Superman.

“It’s gone pretty mental on Facebook and we were mobbed last night. But there’s no malice involved it’s just a bit of fun.

Naomi Anderson commented: “This was the highlight of my night at work.”

Whilst David Hunter added: “It’s all kicking off.”

New campaign encourages youngsters to reach for the stars