A SHOCKING photograph shows a driver on his mobile phone – while driving a 11-tonne crane in a city street packed with pedestrians.

The image was taken in central Edinburgh and shows the driver completely focussed on his mobile while stopped at traffic lights.

Pedestrians, including a mother with her child in a pram, wait to cross the busy junction in the wet and rainy conditions.

The yellow telehandler is thought to weigh around 10880kg (10.88 tonnes) and features two forks sticking out at the front which are used to lift heavy loads on building sites.

One social media user, on seeing the picture, wrote: “I’ve seen it all now – driver of mega construction machine on his phone in city centre traffic.” 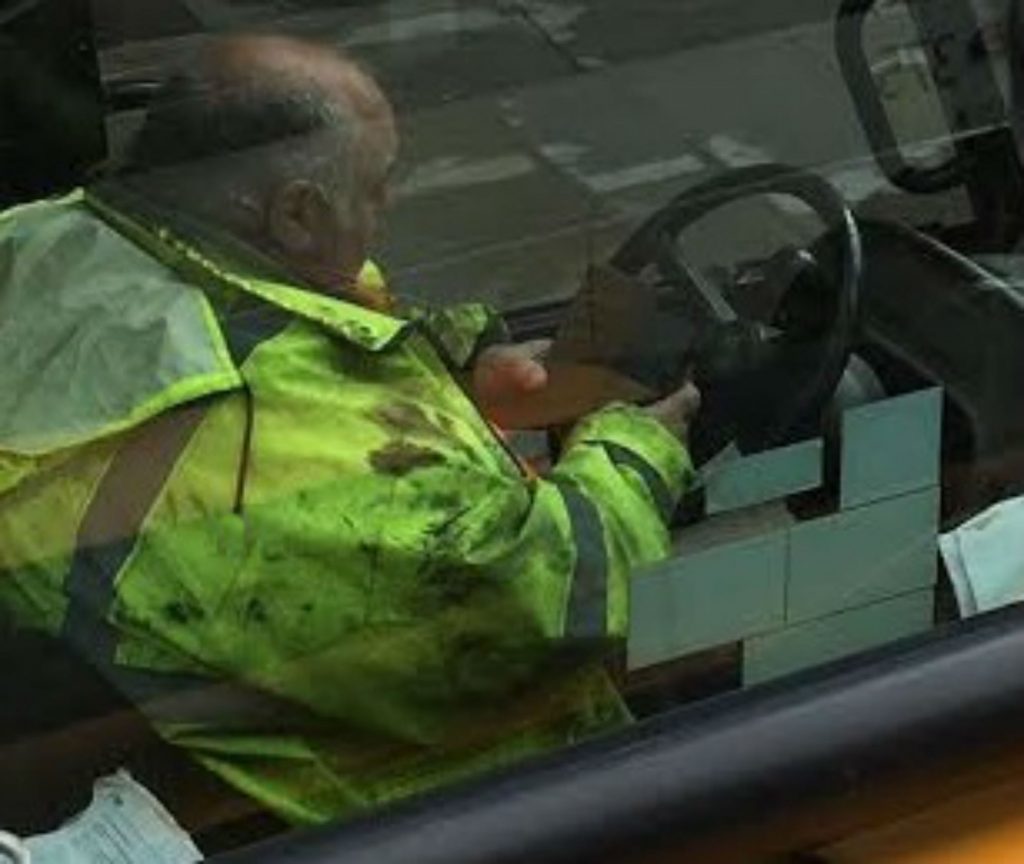 A spokesman for The AA said: “There is no question: this driver is breaking the law. He may be stopped at red traffic lights but he remains in control of a vehicle – and not just any vehicle, this is a large and heavy crane that requires considerable skill and concentration to drive especially through urban streets.

“If he is prepared to use a hand-held phone while sitting at a traffic light, what’s to prevent the temptation of using it overcome him while driving?

“The AA is campaiging long and hard to warn of the considerable distraction of using a hand-held phone while driving and to make this as socially unacceptable as drink-driving. 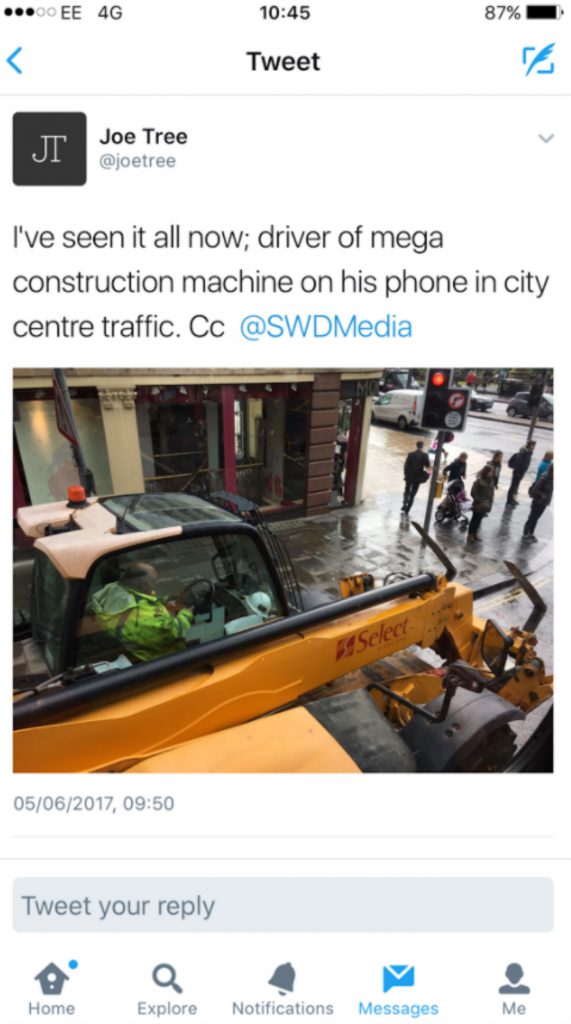 “The only place for a hand-held device is in the glove compartment where it is out of sight and out of temptation. There have been too many tragic examples of people being killed and seriously injured thanks to someone using a hand-held phone while driving. When will this driver learn?”

A spokesman for Scotland’s Worst Drivers, who obtained the image, said: “”Whilst using a mobile phone whilst driving is illegal, it’s especially reckless whilst in control of heavy machinery such as this telehandler forklift.

“Drivers of such vehicles need to be aware of their surroundings at all times, and it’s clear this driver is only concentrating on his mobile phone.

“A driving licence is required to drive a forklift on public road therefore he is risking 6 points, a fine and possibly his job.”

The photo, thought to have been taken by a bus passenger on Wednesday, shows the telehandler in South St David Street, which adjoins Princes Street.

The vehicle is emblazoned with the ‘Select Plant Hire’ logo. Police Scotland said they had no reports of the incident.

New, tougher sanctions for drivers using their phones whilst behind the wheel were introduced in March this year, with offenders facing six points on their licence and a £200 fine, which doubled the previous penalty of three points and a £100 fine.

New statistics have revealed that 200 drivers a day are being caught on their mobiles.

Some of those caught include a man who was caught doing his online banking whilst on the M5 near Birmingham as well as a driver who was behind the wheel of a school bus with ten children on board near Manchester.

A spokesman for Laing O’Rourke, who operate Select Plant Hire, said they were investigating the photograph.

He said: “All Select operatives are given clear training and instruction into the safe operation of all equipment and vehicles which we regularly enforce. We take any breach of protocol very seriously and are looking into this matter.”