THE family of tragic Kirsty Maxwell have set up a Facebook appeal for information, saying their grief is “aggravated by so many unanswered questions”.

The 27-year-old died whilst on a hen do in Benidorm in April after falling 100ft from a tenth-floor balcony of the apartments she was staying in.

Five men have been ordered by a judge to return to Spain to answer questions about her death. 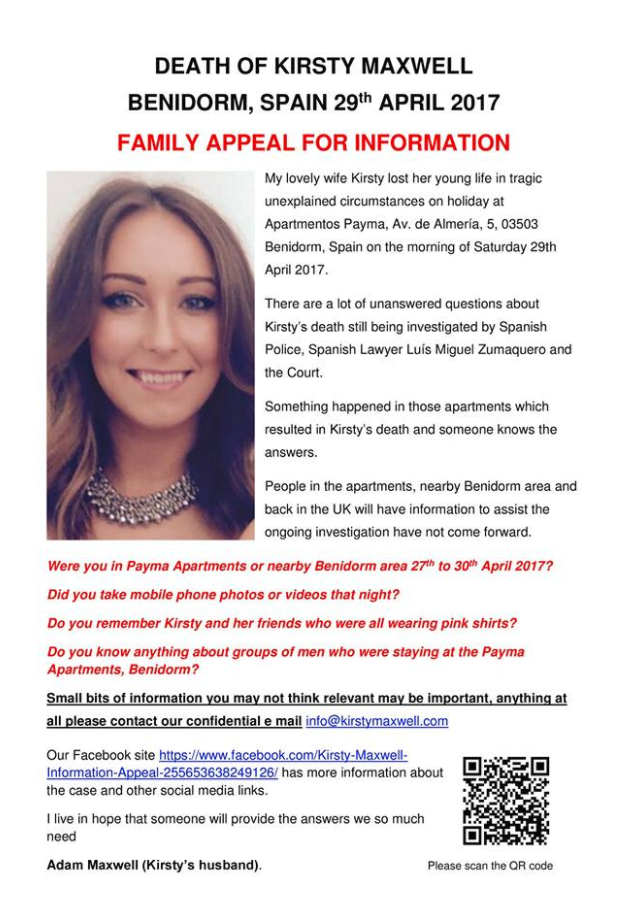 But two days ago her family set up the ‘Kirsty Maxwell Information Appeal’ to try to get their own answers to what happened to the newlywed from Livingston, West Lothian.

The page, which has already had 1,400 likes, features posters created by her husband, Adam, 27, which urge anyone with information to contact him via email.

The pinned post on the new Facebook appeal page reads: “The tragic death of Kirsty Maxwell aged 27 in Benidorm, Spain on the morning of Saturday 29th April 2017 is unexplained with so many issues surrounding her death being subject of ongoing Spanish Police, lawyer and judicial investigations.

“Words cannot describe how Kirsty’s husband Adam, her mum Denise, dad Brian, brother Ryan and the rest of her family and friends are feeling.

“Their grief is aggravated by the fact there are so many unanswered questions about what happened to Kirsty and the knowledge that people out there hold vital information which can assist the family’s search for the truth.

“This Facebook site and other social media platforms (details to follow) are being launched to appeal for any information which can assist the ongoing investigations by Spanish Police and Spanish lawyer, Luís Miguel Zumaquero.

“A dedicated confidential email address [email protected] has been set up to encourage people to contact us with any information which can assist Kirsty’s family and investigations into her death.

“Any small piece of information no matter how irrelevant it may seem, please contact us on [email protected] we do not need you to provide your personal details.”

The page also features new appeal posters created by Kirsty’s husband Adam, which will be put up around Benidorm.

They feature a photo of Kirsty alongside Adam’s message, which starts: “My lovely wife Kirsty lost her young life in tragic, unexplained circumstances on holiday.”

He continues: “Something happened in those apartments which resulted in Kirsty’s death and someone knows the answers.”

The poster finishes with a series of questions asking if people were in the area or have images of the night in question or if they know anything about groups of men who were also staying in the apartments.

It’s signed off by Adam who writes: “I live in hope that someone will provide the answers we so much need.”

A Spanish judge recently ruled that the group of British bodybuilders – known as the Benidorm Five – whose room Kirsty fell from, must return to Spain to be quizzed over her death.

Amazon executive Joseph Graham, 32, will now have to return to Spain for a hearing next month along with cage fighter Ricky Gammon, 31, Anthony Holehouse, 34, Callum Northridge, 27, and Daniel Bailey, 32.