A DISABLED woman claims she was forced to crawl on her hands and knees to get up the steps into a benefit assessment centre.

Maria Quinn said she felt “dehumanised” by the experience at the disability assessment building in Glasgow – which lacks proper access for the disabled.

The 32-year-old uses a walking aid and on a her recent visit this had to be carried by her solicitor while her sister carried her breathing aid.

That left Maria, from Sandyhills, Glasgow, with no option but to haul herself up to flights of steps into the Department for Work and Pensions building in Cadogan Street.

The building – which is Scotland’s main centre for disability assessment interviews, has no permanent ramp or flat entrance.

Instead, disabled visitors must ring a bell and wait for staff to lay a temporary ramp in order for wheelchair users to get up the stairs.

But Maria uses a walking frame equipped with wheels which meant staff refused to get out the wheelchair ramp.

Instead she ended up lying on the ground and pulling herself along by her hands while her solicitor and sister between them carried her rollator, nebuliser and bag.

Maria, who has mobility issues and Complex regional pain syndrome (CRPS), said: “The solicitor went into the building to ask for the ramp. I was with my sister and when the answer was “no” “it is for wheelchairs”

“I had my rollator, my crutches were in my sister’s car. The solicitor came out and relayed what the security are told. He was genuinely too gobsmacked to react fully.

“It was after I’d crawled up the stairs and into the reception to be told the next set of stairs had the same rules.

“I was in quite a bit of distress. pain, embarrassment , plus a couple of people were waiting on their appointment but had gone to the front outside to smoke and promptly extinguished their cigarettes in order to have an argument with two of the security men.

“I have a fair few conditions. I felt completely dehumanised. I have walking aids yes, but I have social anxiety and agoraphobia.

“My sister was able to only just keep me focussed on crawling to the top of the stairs, the concrete stairs that felt like titanium under my knees.”

“In a nutshell, the ‘rules’ are that the portable ramp goes out only for wheelchairs. If the security had put it out for my rollator, like a zimmer, but with wheels, and I had fallen, it would have been them at fault.

“Had we done that and I had been late I would have immediately been told to reschedule that appointment for a different date and I would have been sanctioned.”

“I was completely overwhelmed and this put me over the edge. I don’t handle crowds or noise well at the best of times so I had a panic attack.”

After Maria shared her experience on social media, friends condemned the DWP. 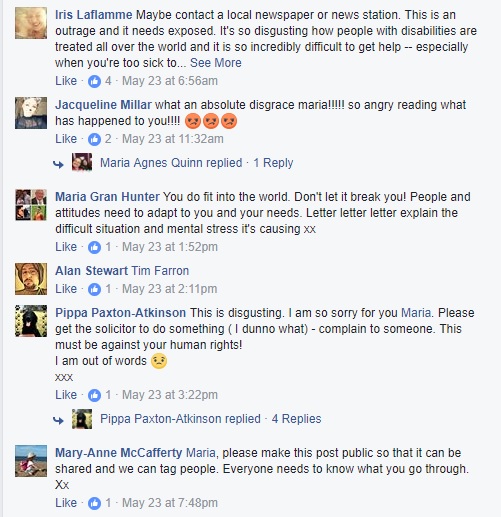 Iris Laflamme said: “This is an outrage and it needs exposed. It’s so disgusting how people with disabilities are treated all over the world and it is so incredibly difficult to get help, especially when you’re too sick to ask for it.”

Pippa Paxton-Atkinson wrote: “This is disgusting. I am so sorry for you Maria. Please get the solicitor to do something, I dunno what, complain to someone. This must be against your human rights. I am out of words.”

And Jacqueline Millar said: “What an absolute disgrace Maria, so angry reading what has happened to you.”

Campaigners have criticised the Department for Work and Pensions and American contractors Maximus for failing to install a permanent ramp at the premises.

Bobby Park, access consultant and treasurer of charity, Glasgow Access Panel, said: “The building is not designed for wheelchair users.

“It’s seen as part of the test. It’s designed that way to test the person’s ability; if they get into the building, without asking for assistance, they will probably fail the test.”

Tressa Burke, CEO of Glasgow Disability Alliance, said: “This particular building has been in use for many years as an assessment centre and difficulties with access issues are well documented.

“We feel it is not acceptable that anyone should have to crawl on their hands and knees to enter a building run by DWP, or any public sector body.

“Maria felt walking up the ramp was the best way for her to enter the building. Being told she was not allowed to do so made this particularly distressing for her.”

“Denying Maria, who is one of our 4000 members, the use of the ramp to walk on meant she was humiliated and in pain while in an already vulnerable state due to fear of sanctions.”

Layla Theiner, from Disability Agenda Scotland (DAS), said: “There have been significant problems for a large number of people applying for Personal Independence Payments and we are aware of a range of issues people have faced, although Maria Quinn has been treated particularly dreadfully.”

A DWP spokesman said: “Where an assessment centre isn’t directly accessible from the street level, we endeavour to make this clear to people before they arrive for their appointment.

“There is a ramp available at the Glasgow Assessment Centre – if people can’t use this, arrangements will be made to see them at an alternative location.”

Last week, it was revealed that a Scots teenager who is blind, severely autistic and barely able to speak was ordered by the DWP to attend a meeting to check if he should continue to receive benefits.

Ciaran Vassie, 16, was told back in 2013 that he would receive disability living allowance for life as his condition won’t change.

After a public outcry, the DWP eventually reversed the decision and told Ciaran he could have his entitlement assessed via his medical records.