A VANDAL has been praised for “improving” the appearance of a Highland bus with graffiti.

Police Scotland posted an image on the Stagecoach vehicle along with an appeal to try to find the culprit – but most social media users have complimented the artist.

The bus was parked up in a layby next to a cemetery in Dunvegan on the Isle of Skye over the weekend, when it received its unique paint job.

The writing, which has been outlined with black spray-paint appears to be indecipherable but a star can be seen along with bright yellow lines across the design.

Tweeting the photo of the Stagecoach bus, Lochaber&SkyePolice wrote: “This. #Dunvegan over the weekend. Really?! Please let us know who is stupid enough to do this so they can be made to clean it.” 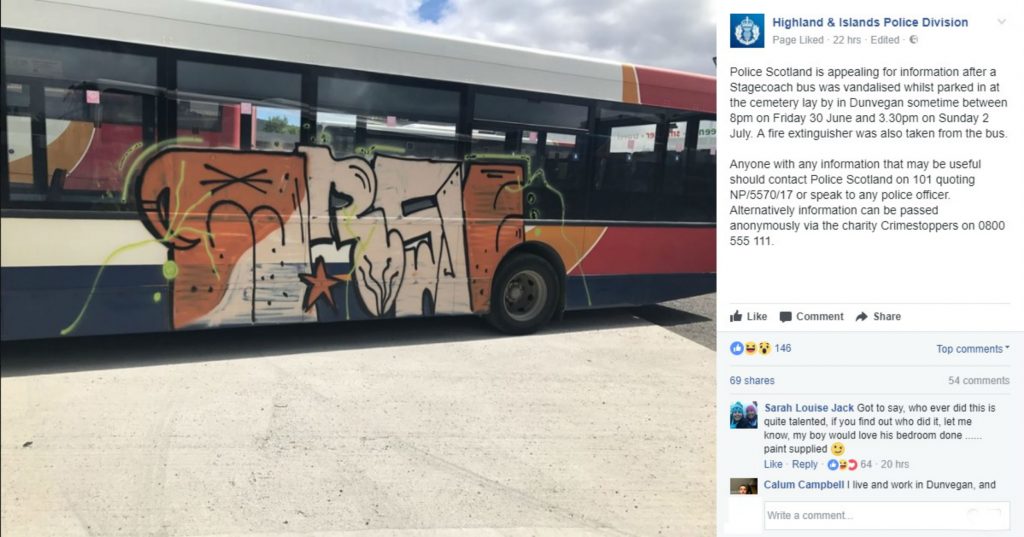 Most social media users were admiring of the graffiti artist.

Sarah Louise Jack wrote: “Got to say, who ever did this is quite talented, if you find out who did it, let me know, my boy would love his bedroom done …… paint supplied.”

Others admired the artwork but condemned the theft of a fire extinguisher from the vehicle at the same time.

Elaine Robertson said: “Done a good paint job but taking a fire extinguisher off the vehicle now puts that vehicle off the road till it is refitted which means a reduced service in rural areas!”