THE FATHER of a three-week-old baby who died in suspicious circumstances has broken his silence to quash rumours that he and his fiancee were involved.

Mikayla Haining died on Thursday June 8 after being taken to Raigmore Hospital in Inverness in the Scottish Highlands.

Police revealed they are treating the tragic death as “suspicious” and are still trying to find out what happened to the tragic tot.

Mikayla’s parents, Tom Haining and Shannon Davies, are believed to have only moved into the property shortly before their daughter’s death. 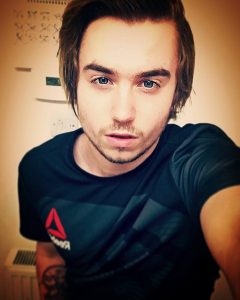 And he took the opportunity to blast Police Scotland for announcing Mikayla’s death was being treated as suspicious.

Posting on his Facebook page, Tom said: “This is getting beyond a nightmare now. Almost four weeks and we still haven’t had the time and place to grieve about what has happened.

“A lot of you will already know by now what has sadly happened and everything that is going on at the moment.

“Four weeks the investigation has being going on surrounding my daughter’s death and still had no answers.

“Tests and autopsy found nothing, instead of it now saying unexplained they put it to “suspicious” and still no answers.

“The only thing that does is make the public start rumors and makes people think that she has been harmed by either myself or Shannon. 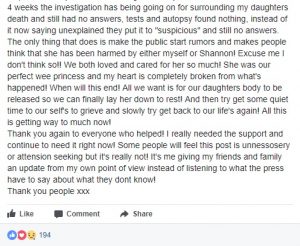 “Excuse me I don’t think so!We both loved and cared for her so much! She was our perfect wee princess and my heart is completely broken from what’s happened!

“When will this end! All we want is for our daughter’s body to be released so we can finally lay her down to rest and then try get some quiet time to our self’s to grieve and slowly try get back to our lives again. All this is getting way too much now.”

Tom went on to thank everyone for their support and help through the investigation and revealed he had finally returned back home after four weeks.

The 19-year-old added: “As some are aware I am staying out of the area right now. I have only just got the keys back into my house today and it looks like a complete bombsite.

“Rubbish has been dumped on the floor, things have clearly been thrown about and there is even a massive chunk of carpet missing from the middle of my sitting room.

“I can barely walk straight without having to dodge all the stuff that’s been dumped on the floor. Now don’t get me wrong I completely respect the police and forensic team in every way to help find and give us answers, but to walk into my own home seeking time to grieve quietly for the first time in four weeks to this was just shocking and disrespectful.

“So I will be staying out of the area for a good few weeks yet whilst I get the house sorted and try and get it back to normal, which will never happen without my daughter.”

The post has since been shared more than one hundred times and attracted dozens of messages from wellwishers.

Heather MacLean said: “Oh Tom, you’ve been through hell. My heart breaks for you both but stay strong and you’ll get through.”

Stacey Walker wrote: “Take care, you and Shannon. It’s an absolute outrage what the police are doing. I hope you guys eventually get the peace you both deserve to actually grieve. If you need anything, let me know.”

And Angela Mackenzie said: “Funny what people do when they don’t know the full story. Ignore them. Take it step by step. Hope you are well.”

“Our investigation remains ongoing at this time, as we work towards establishing the full set of circumstances that led to Mikayla’s death, and it would be inappropriate to comment further at this time.”