THE MOTHER of murdered schoolgirl Paige Doherty has written about the agonising moment she learned her daughter could not have an open casket.

Pamela Munro wanted to bring the tragic 15-year-old’s body back to the family home in Clydebank, West Dunbartonshire, so that friends and family could say their final goodbyes.

But legal delays meant her remains were kept for so long it was no longer possible to have an open coffin.

The family had to “kiss a box goodbye instead of our little girl”. 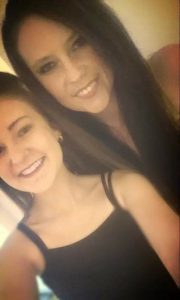 Pamela is now calling for reform of the system to allow the grieving families of murder victims to bury their loved ones more quickly.

The 32-year-old identified her daughter over a television screen the day after her body was found in a wooded area in March last year.

Two days later the family were allowed to see Paige in person and were told they couldn’t hold or cuddle” her but Pamela said she was just “grateful” she was able to see her little girl.

Due to defence lawyers being allowed up to 110 days to arrange a second post mortem, the family were forced to wait almost a month before being told Paige’s body had deteriorated beyond the point where it could be brought home.

Writing on Facebook post, Pamela said: “On the 24th March after her post mortem from the crown was completed, we had a viewing of her body. I was so grateful I could see our little girl.

“That’s all we could do was see her. We couldn’t hold her or lift her to cuddle her we could touch one side of her face and asked not to take pics of her and not to look at her neck injury. She was in fact property of the Crown.

“We stayed for 10 minutes because we were told that for her body to keep intact and not deteriorate to spend as little time as possible and it would give us more chance of having an open coffin.”

“We had to wait until they decided they were doing a post mortem and when it would be.

“I get every person accused of a crime is entitled to a defence, but why when that lawyer knows that a little girl cannot be laid to rest or family give her a kiss goodbye and bring her home, why would they then prolong it?

“Regardless of whether their client is guilty or not, you would think they would want a quick post mortem so a child can be laid to rest. Not in this case though.”

Pamela said she was informed on April 12 it was no longer possible to have an open coffin.
“We had two days to get the family up to view her,” she said.

“This was almost a month since she had been murdered. Her hair fell out her eyebrows and eyelashes also, as well as a lot more that I won’t disclose as it’s absolutely heartbreaking.”

Even then it took another three days before the second postmortem examination was carried out, on April 15.

The family continued to hope against hope that an open coffin would still be possible.

“We waited for a call from the undertaker who collected her, he thought he could maybe use wax to rebuild her and a friend kindly bought her a wig identical to her own hair, another family friend sent an eyebrow kit,” she said.

Pamela added: I’ve said from day one we want Paige’s Law and I believe one day we will get it and other families will hopefully not face the length of time we did which ultimately resulted in us spending 30 minutes altogether with our princess in the space of a month and kissing a box goodbye instead of our little girl.”

John Leathem stabbed the youngster more than 146 times in a frenzied attack at his deli in Clydebank.

The married father-of-two later dumped her body in a nearby wooded area.

He was found guilty of murder and sentenced to a minimum of 27 years in prison but this was reduced to 23 years following an appeal by Leathem.

A Scottish Government spokesman said: “Our sympathies continue to go out to the family and friends of Paige Doherty.

“The Scottish Government is aware of concerns about the length of time it took for one of the post-mortems to take place.

“There are no set time limits for a post mortem and it is unavoidable that in some cases of homicide there may be a delay before all the procedures which are necessary in the context of potential criminal proceedings, including procedures reflecting the right of an accused to a fair trial, can be completed.”