SIR CHRIS Hoy has had his “Olympic legacy destroyed in one bite” after his wife outed him for biting into a KitKat without splitting it into fingers first.

The legendary cyclist said he might have to “have a break” from Twitter after Sarra revealed to his 226,000 followers last night that he munched on the biscuit whole.

She wrote: “Well Chris Hoy has just eaten a KitKat without breaking it into two first. 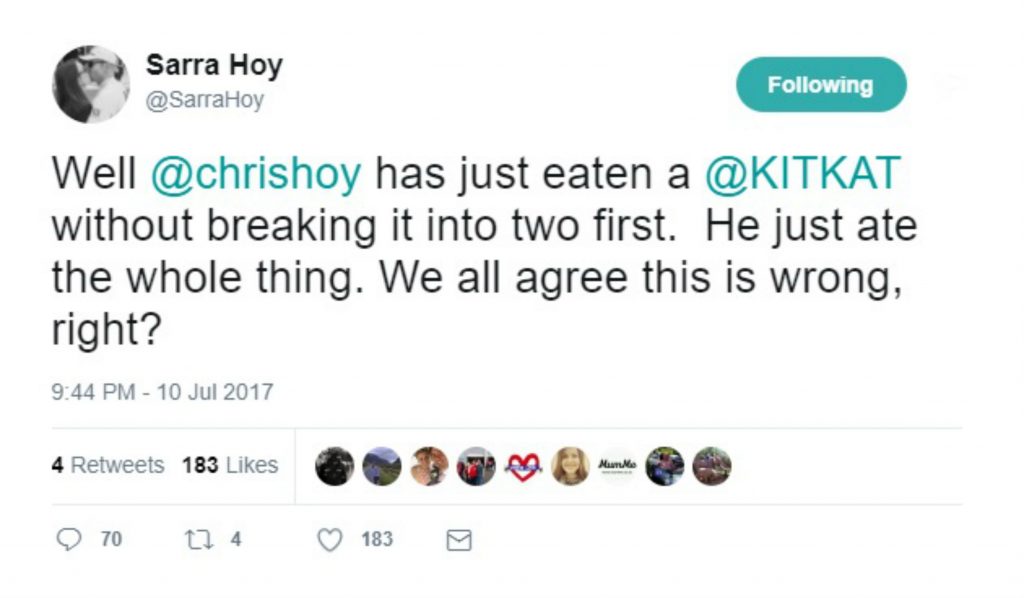 “He just ate the whole thing. We all agree this is wrong, right?”

The revelation quickly sparked a debate amongst social media followers who told Hoy he needed “help” and that his method was just “plain wrong”.

And some racing peers even suggested Hoy should be stripped of his knighthood for his shocking actions. 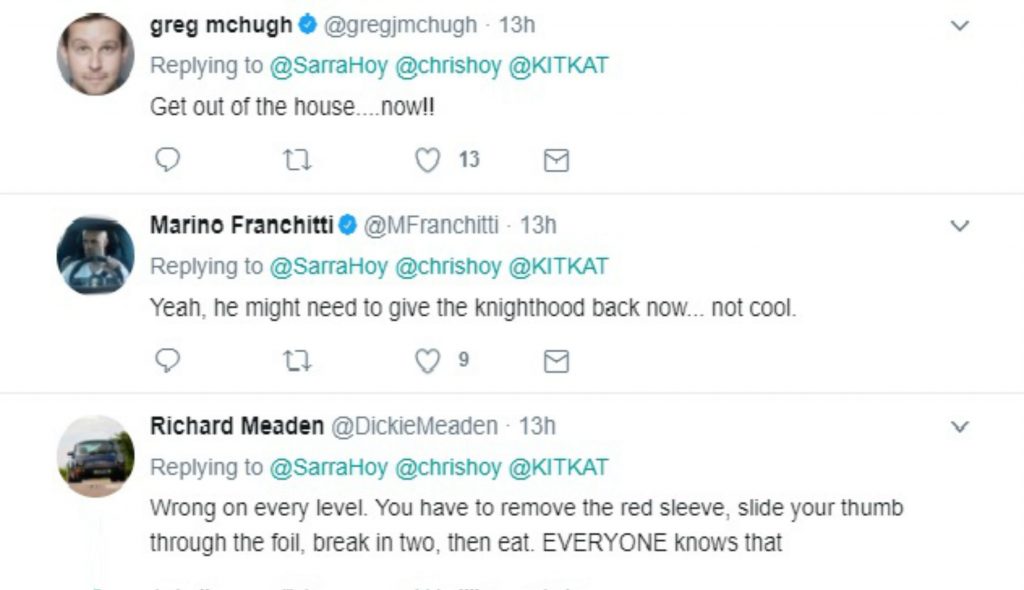 The 41-year-old Scot was advised by followers that the correct way to eat a Kit Kat is to slide a fingernail along the foil packaging before snapping off a finger at a time.

British GT champion and endurance racer, Marino Franchitti? said: “Yeah, he might need to give the knighthood back now… not cool.”

“You have to remove the red sleeve, slide your thumb through the foil, break in two, then eat. Everyone knows that.”

And one follower even wrote: “An Olympic legacy destroyed in one bite.”

The debate attracted hundreds of messages, mainly agreeing Sir Chris was wrong, with many sharing the hashtag “KitKatGate”.

Sir Chris clearly seen the funny side, revealing he ate “four fingers” of the KitKat “Lengthways” before joking: “Think I’m going to have to come off Twitter for a while. #KitKatGate.” 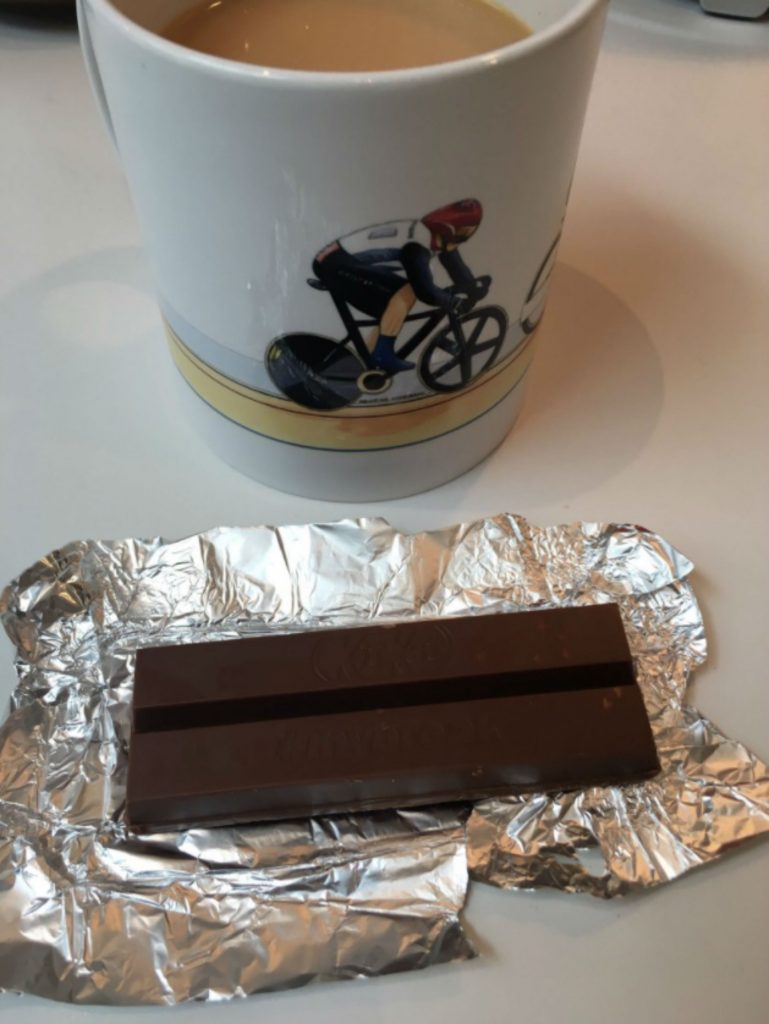 Following the reaction, Sarra took to Twitter again this morning to playfully apologise to Chris for outing him.

“One day, when there’s greater understanding and acceptance, you’ll be able to eat KitKats the
way you want.”

It is not the first time Sarra has outed her husband for his actions behind closed doors.

In 2015, the six-time Olympic cyclist was publicly shamed on Twitter by Sarra Hoy, who said that living with him was like being at a “farty party”. 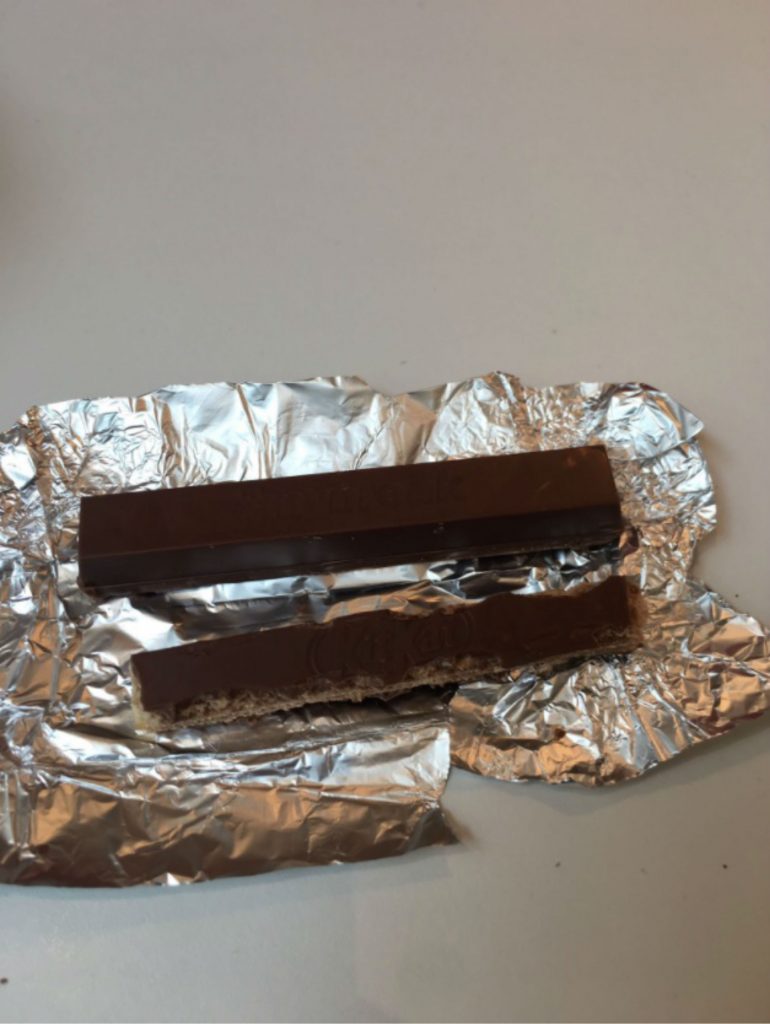 The revelation came about during a Twitter conversation about protein powder.

And in 2014, she wound him up again about his rear end by sharing a picture of Sir Chris sat alone at an event surrounded by empty chairs, with the caption: “Did you fart or something?”