The Scotland international resigned for the Leith side on a three-year deal on Saturday, a decade after leaving the club in a £2 million switch to Rangers.

Former Celtic player and manager Lennon is targeting at least a second place finish in the Premiership in their first campaign back in the top-flight following a three year absence. 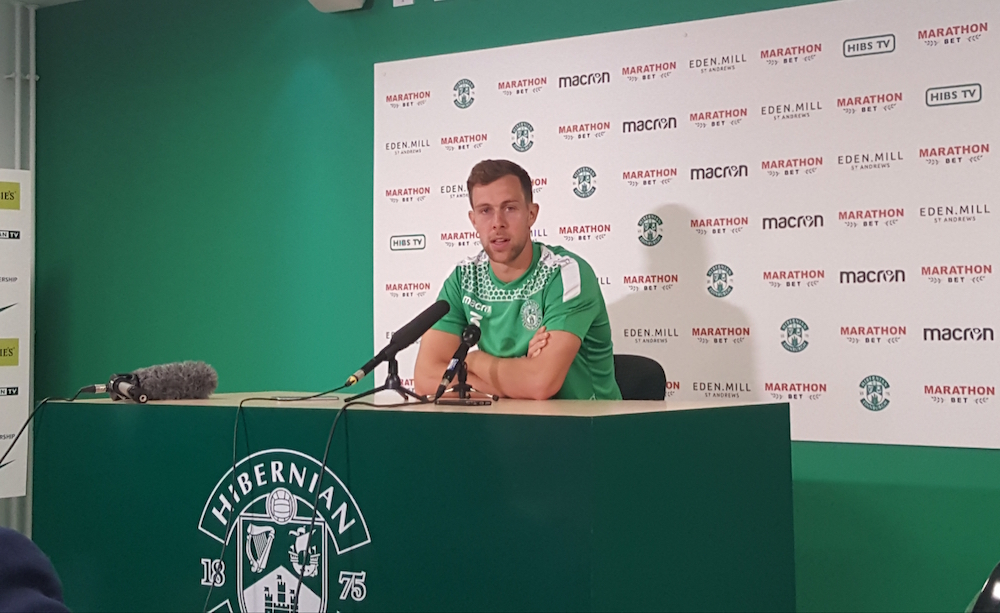 And Whittaker insists he will relish playing his part in trying to realise that aim under one-time rival Lennon after thriving under the pressure of playing in Glasgow’s football cauldron.

He said: “Obviously I was at Rangers when the manager was at Celtic and because we’ve both been involved with the Old Firm, we probably have that winning mentality.

“The manager’s certainly been there and done it, and I’ve got a lot of shared experiences as well.

“It’s something we can hopefully help bring to the squad.

“There’s definitely been a change of mindset within the club.

“It’s one of the biggest things that the manager’s brought. I played against him as a player and his determination sticks out.

“He’s a winner and you can see that from the chats I’ve had and from him being on the side of the pitch.

“You can see that he wants to win matches, probably the same as he was as a player.

“You can see the change that’s had with the squad already and hopefully we can be successful.

“He definitely won’t settle for finishing in seventh or eighth next season. It was a shame for Hibs to be in the Championship for three years, with the stature of the club they should never have been down there in the first place.

“We’re a big club in this league and we need to go there and show that.”

Whittaker, who could feature in Friday night’s Betfred Cup trip to Ross County, has been warmly welcomed back to the club by the Hibs supporters.

But the 33-year-old admits he is not sure what kind of reception he will get at Ibrox in the second Premiership game of the season after leaving the Govan outfit for Norwich City in 2012 at the height of Rangers’ financial troubles.

Whittaker and Steven Naismith were among the players who refused to have their contracts transferred to the new club.

He added: “Whatever reception I get, I won’t let it bother me. I’m 33 now so I’ve experienced all the different ones, whether you’re cheered or booed.

“That’s part of football and you just have to get on with it. I’ve not given any thought to what kind of welcome I’ll get there.

“I’ll just be trying my best to win for Hibs, like the rest of the other boys. I just don’t want to let anyone down.

“Everyone has a different opinion of what happened and who was to blame for what.

“As players we were paid to play football and that’s what we tried to concentrate on through the whole process.

“It was difficult at times but that’s all we knew.

“Steven and I wanted to play football. That was the be all and end all.

“We took the wage cuts, for example, to try and help everything come back together.

“We did our bit but people have different perceptions of that. We can’t change that. We just need to get on with it.”

Whittaker was part of the ‘golden generation’ at Hibs that included current Celtic captain Scott Brown and Kevin Thomson, who also made the switch to Rangers in 2007.

Now in the twilight of his career, Whittaker insists he is keen to give something back to the club that gave him a springboard for a successful career.

Whittaker, who was also linked with Hearts, added: “There were other approaches made but when I knew I was coming back and Hibs were interested, there was no go getting away from my ties with the club.

“Coming through here and having that platform to be a professional, the ties I have with the club, all the good feelings you have when you make it as a professional.

“It was the natural progression for me to come back here and hopefully I’ll end my career here.

“The group I played with here all went on to enjoy good careers individually. We really progressed well through the ranks and into the first team and we kept progressing.

“I had a couple of options down south but that would take me away from this opportunity.

“It’s great and I‘m looking forward to doing a bit of coaching and getting involved with the younger teams as well.”