POLICE have revealed that anti-vehicle barriers will be used at this year’s Edinburgh International Festival to defend against potential terrorist attacks.

Police have announced that they will be placing barriers at key locations around this year’s event in an attempt to prevent attacks similar to those seen at Westminster Bridge and Borough Market in London.

The barriers will be in place to prevent the use of vehicles to attack largely populated areas during the Festival, which is the third largest ticketed event in the world behind the World Cup and Olympics.

Lorry attacks have had devastating consequences across Europe in recent years.
86 people died when a 19 tonne cargo truck was driven in crowds celebrating Bastille Day in Nice in 2016.

12 people died when a lorry was driven into a Christmas market in Berlin last year whilst 5 people died earlier this year in the Westminster attack.

Despite police ensuring the public that there is no specific threat to this year’s Festival, the UK terror threat remains at ‘severe’ so measures are being put in place to prevent attacks.

The National Barrier Asset (NBA) has been used at this year’s Wimbledon and the Champion’s League final in Cardiff and uses high barriers and gates to prevent vehicles entering pedestrian areas.

The NBA is owned by the Home Office and its use will be funded completely by the UK government.

In an update of their Facebook page yesterday the Edinburgh Police Division shared three photos of what the barriers look like and wrote: “The Edinburgh International Festival and Fringe is the largest arts Festival in the world, lasting for just over three weeks in August.

“It is also reported to be the third largest ticketed event in the world, just behind the World Cup and Olympics.

“Whilst there is no specific intelligence at this time to suggest that this year’s events are at risk from a terrorist attack, the threat to the United Kingdom from Internationally Inspired Terrorism remains at “Severe”. This means that ‘an attack is highly likely’.

“Following recent attacks in London and Manchester, Police Scotland have been reviewing security arrangements for this year’s events with our partners, including the The City of Edinburgh Council, The Royal Edinburgh Military Tattoo and Edinburgh International Festival/Fringe.”

It continues: “Following this review Police Scotland, in collaboration with the City of Edinburgh Council, submitted a request for the deployment of the National Barrier Asset (NBA) at certain city centre locations for the duration of the Festival and Fringe.

“The NBA is a temporary deployed system including high security gates, portals and barriers, which are designed to prevent hostile vehicle attacks on key or busy crowded place locations. Some of the equipment used is shown in the images attached. 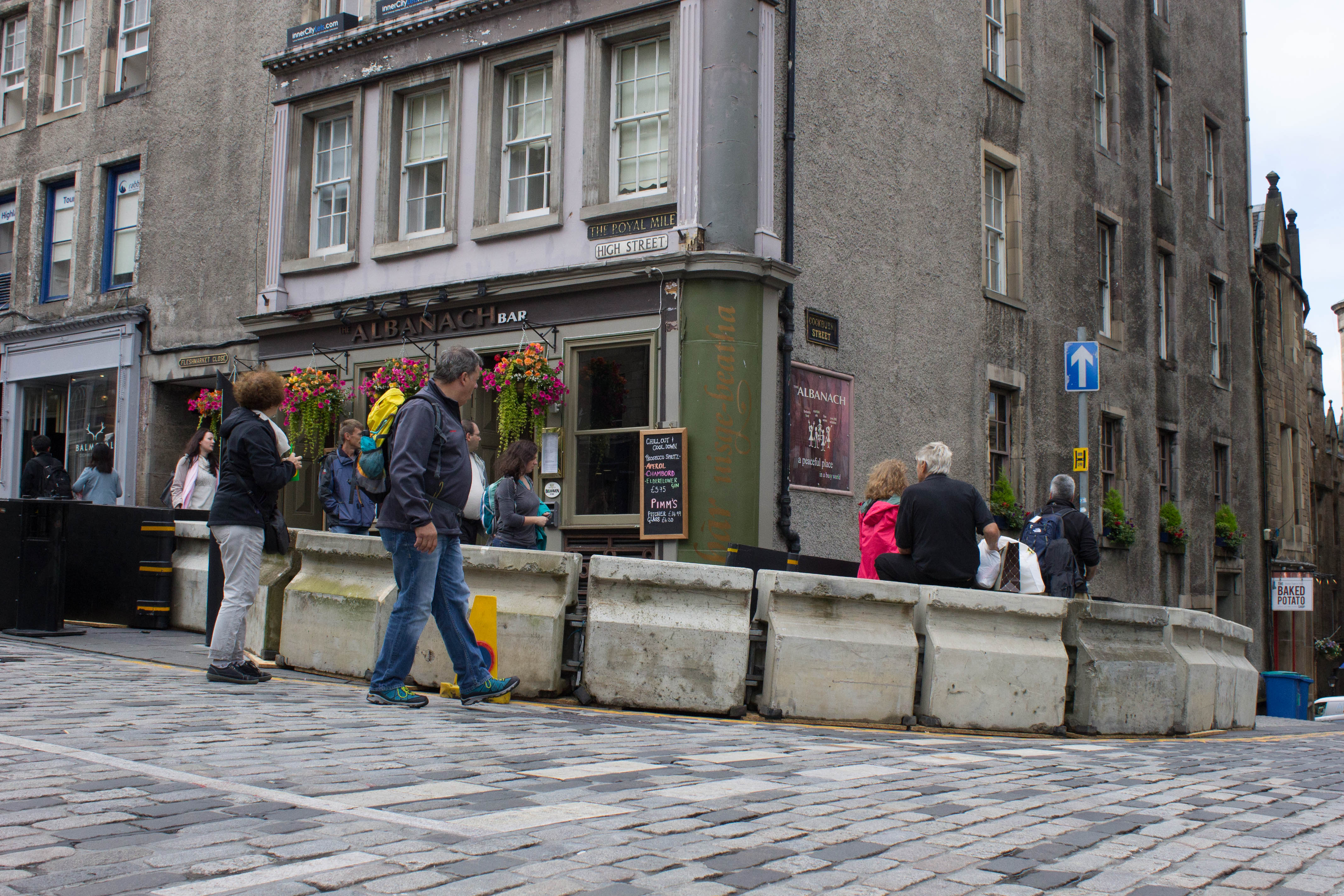 “It is owned by the Home Office and its deployment around the UK is coordinated by Sussex Police, with their installation contractor H2S2. The NBA has been utilised extensively in the UK this year at other major events including Wimbledon and the European Cup Final in Cardiff.

“This request for its use in Edinburgh has been approved and will be funded entirely by the UK Government.

“The NBA forms part of Police Scotland’s holistic security plan for this year’s event. It will help to keep people safe whilst attending events at Edinburgh Castle and the High Street in the event of Vehicle as a Weapon Attacks, such as those seen at Westminster Bridge and Borough Market in London.”

The first photo shows a large yellow barrier blocking the entrance to what appears to be a car park.

Facebook users have been quick to react to the announcement.

Elizabeth Laing wrote: “It is so very sad that one has to take these measures.

“Thank you Police Scotland for doing your best to keep everyone safe. I pray that this will not be necessary and that it will be a successful and peaceful event which will be enjoyed by all.”

Amanda Steven commented: “Great to hear extra measures are being taken to protect the community in the festival.”

Whilst Neil Feltham added: “If it’s keeping people safe then I’m all for it.”
The 2017 Edinburgh Festival Fringe will start on August 4 and last throughout the month.

A council spokeswoman said: “We are helping the Police to install a range of anti-terrorism measures in Edinburgh similar to those deployed in other major cities.

“There is no intelligence to suggest a threat, but it is appropriate we put safety first and protect large crowds of people at key times during the year.”