A MORRISONS driver has been caught using his mobile phone behind the wheel as he travelled on one of the UK’s busiest motorways.

The photograph shows the man at the wheel of a yellow Morrisons delivery van whilst holding a phone to his ear.

It was taken last Saturday evening on the busy M62 motorway which connects Liverpool and Hull, via Manchester and Leeds. 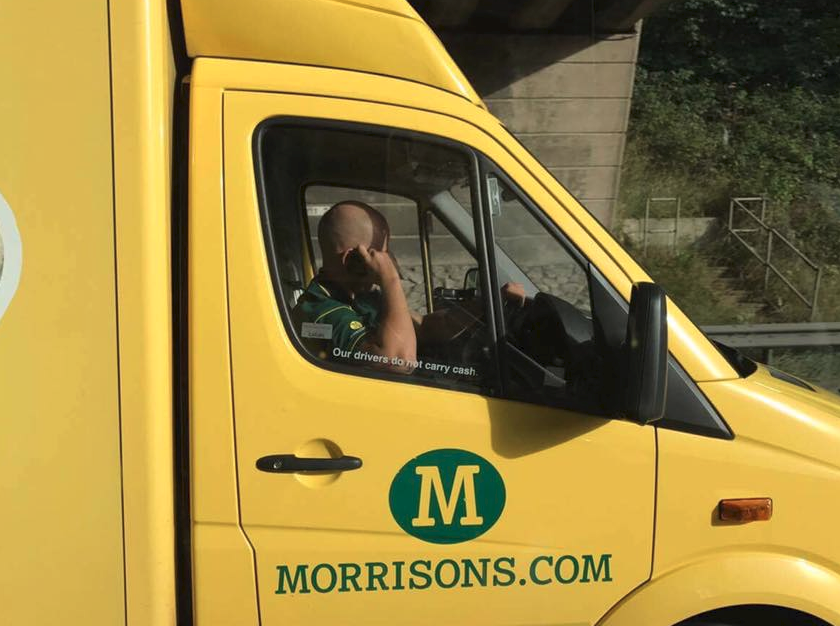 The image was taken by Amee Carroll who uploaded it to the Morrisons Facebook page with the caption: “Great colleagues you have driving down the motorway on his phone! Think this guy needs shaming!”

The snap clearly shows the man dressed in the familiar green Morrisons shirt with logo on the sleeve.

His right arm rests on the window as he holds the phone to his ear whilst the left arm his outstretched with his hand holding onto the top of the wheel.

A member of the Morrisons social media team replied to the photo and wrote: “Oh no Amee!

“Please let me know a location, time, date & registration if you got one so I can get this dealt with? Thanks.”

The danger of using mobile phones whilst driving has been well document with the government recently announcing harsher penalties for those who are caught.

In 2015, lorry driver Tomasz Kroker was changing music on his phone when he failed to see that traffic ahead had started to tailback.

After spotting the stationary traffic when it was far too late to stop, he crashed into the queue at 50mph, killing a mother and three children.

Video footage from inside the cab showed the horrific events unfold as the driver paid no attention to the road.

He was jailed for ten years.

A Morrisons spokesman said: “The driver should not have been using his phone and we’re investigating.”