A FILM reviewer has caused a storm after claiming the blockbuster movie Dunkirk is an excuse for “men to celebrate maleness”.

Ms Bonner has since suffered a huge backlash on Twitter with one critic telling her it was a movie about people “who died for your freedom you selfish moron”. 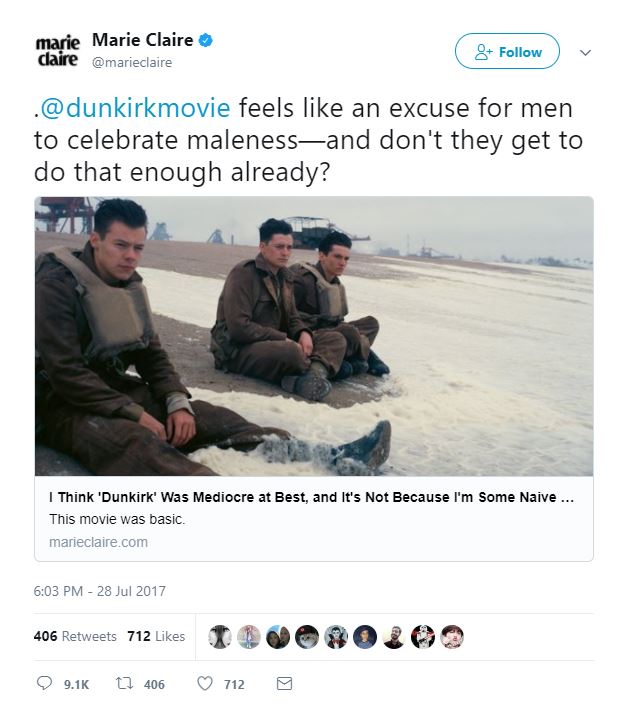 The story of how 300,000 members of the British Expeditionary Force, routed by the German Army, were rescued in May and June 1940 has already been criticised for “ignoring” French involvement.

Ms Bonner wrote in her review: “My main issue with Dunkirk is that it’s so clearly designed for men to man-out over. And look, it’s not like I need every movie to have ‘strong female leads’.

“Wonder Woman can probably tide me over for at least a year, and I understand that this war was dominated by brave male soldiers.”

Marie Claire tweeted a ink to the review with the words “@dunkirkmovie feels like an excuse for men to celebrate maleness—and don’t they get to do that enough already?”

Andrew Tate, Light-Heavyweight Kickboxing Champion, replied to the article with a succinct tweet that got more likes and retweets than the original article.

The former Big Brother contestant wrote: “Or it’s a historical movie about people who died for your freedom you selfish moron.” Tate’s comment gathered over 22,000 likes and 2,800 retweets.

User KYginger wrote: “Considering what those MEN accomplished and what those MEN sacrificed- I, a woman, would gladly celebrate their “maleness” every damn day.”

Other users were quick to defend the £100m budget film, and cited historical accuracy as the reason it was so heavily dominated by men.

Shipwrekked2 commented: “What’s wrong with celebrating heroic maleness? This headline is an affront to those engaged in history, and a divisive message to your readers.”

Scott Shaw added: “@dunkirkmovie is as much about what it means to be good citizens as it is about being soldiers. That’s what is lost on the ‘reviewer’.”

Mateusz Parys wrote: “Basically, her strongest objection to “Dunkirk” is that is about Dunkirk and not anything else, like marginalized group. Lol, it’s sickness.”

She captioned it simply: “Men celebrating their maleness.”