ALMOST 200 seagulls – including 30 chicks – have been shot this year after a Scottish city decided to take lethal measures over a plague of aggressive birds.

After trying everything from noise deterrents, plastic owls, anti landing systems and netting, Dundee City Council have taken to using deadly force in a bid to control the birds.

Not only have pest controllers shot down almost 200 gulls in just eight months – they have also removed 401 gull eggs.

Under the Wildlife and Countryside Act 1981, it is illegal to kill, injure or remove any wild birds including seagulls. 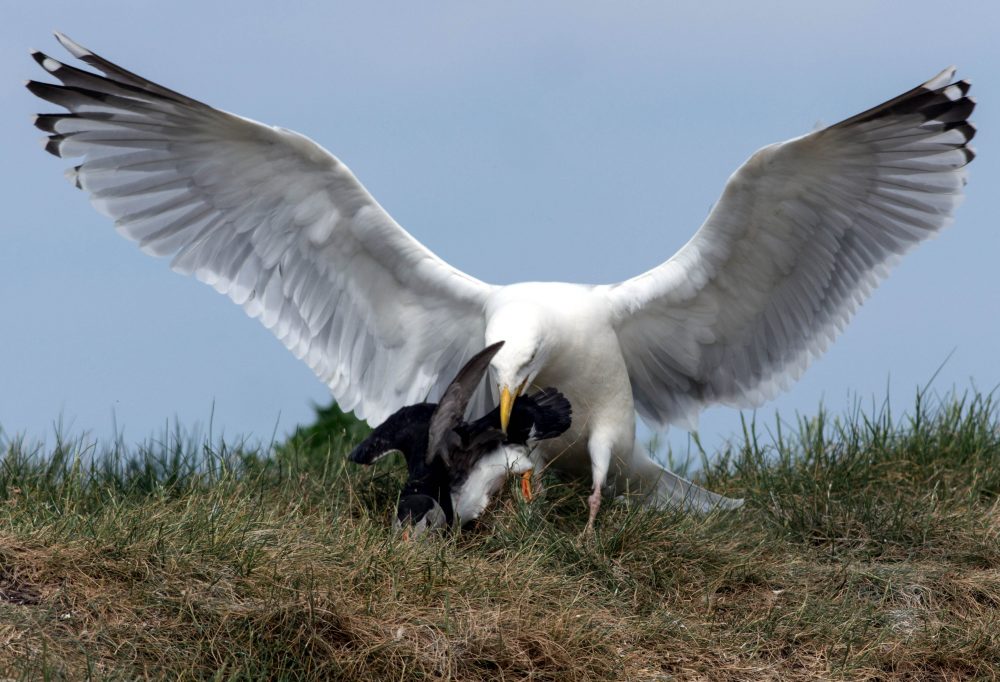 But authorities are allowed to shoot the animals as a last resort if they have shown that every other non-lethal alternative has been tried.

Council chiefs have taken to using the heavy-handed approach after claiming seagull numbers have intensified.

They believe the increase in birds is a result of reforms in the city’s recycling centres which has seen hungry gulls taking to the streets to scavenge for food.

Lord Provost Ian Borthwick said: “I am satisfied that the council is doing its very best to deal with the problem.

“Cities all over the UK are struggling to cope with the influx in seagulls, and changes brought about over the last while are bound to induce the problem.

“People should be more careful not to drop large amounts of food on the streets and avoid feeding them.

“I want a solution which will help everyone, with a balanced approach that will be effective in reducing the problem.”

A spokesman for Dundee City Council said: “We know that gulls can often be a cause for considerable distress and annoyance and we continually pursue tried and tested as well as innovative solutions to the problems that arise from the birds.

“Gulls are protected by the Wildlife and Countryside Act 1981.

“It allows for the destruction of birds under certain circumstances, but this is only permissible where it can be demonstrated that they pose a risk to public safety or public health, and only when all other non-lethal methods of control have been investigated and discounted.

“We would also ask that people do not feed seagulls as this only exacerbates the problem.”
However RSPB Scotland today revealed that seagull numbers are actually in decline.

A spokeswoman said: “The RSPB urges people to follow non-lethal methods particularly because of the massive declines in numbers suffered by some gulls.

“Non-lethal methods include keeping food supplies to minimum and preventing gulls from nesting where they might cause a problem by gull-proofing buildings.

“Believe it or not, herring gulls (one of the most common types encountered in urban areas) are in serious trouble.

“Numbers have declined by more than 50% since 1970 and they are continuing to do badly along with other seabirds due to changes in natural food supplies.

“They need our help.

“Gulls have always been a feature of coastal towns and cities, the actual number of incidents is comparatively few, and they only have young to protect for a few weeks so it would be lovely if we could find a way to live in harmony.”

Other Scottish councils have also weighed into the discussion over the best way to deal with aggressive seagulls.

A spokesman for Perth and Kinross said: “We have had one complaint about an attacking seagull and information was provided about what steps can be taken to deter the birds.

“If we see a significant increase in the number of complaints being received about attacking seagulls we will consider all of our options.”

A spokesman for Fife Council revealed that they are using a nest and egg removal programme to contact an issue with seagulls in one of their main high streets.