SCOTLAND is heading for the worst midge season since records began – with numbers of the biting insects set to be up 40% on last year.

The Scottish Midge Forecast said they are on course to record 68 billion of the tiny menaces this summer – more than 13,000 each for every person living north of the border.

The organisation started collecting detailed information on midge numbers in 2010.

Dr Alison Blackwell said the previous record was set in 2014 at a trap in Inveraray, Argyll and Bute, with 6.5m midges. Based on results so far, she is expecting that number to be higher this year.

The miserable July weather experienced in most parts of Scotland has provided ideal breeding conditions for midges. 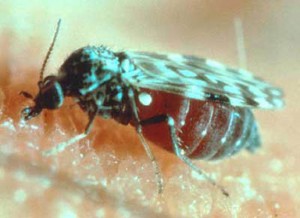 A rare third breeding wave of the pests is firmly on the cards, stretching out the torment until the end of September.

Dr Blackwell said today: “It’s really difficult as there are different levels in different areas, but it’s safe to say that these are the highest catches in five years at this point in the season.

“2014 was the highest up until this year. This year we’re seeing a 30-40% increase from 2016 and numbers are higher than 2014 although we haven’t complete counting all the traps yet.

“So far our biggest catches have been in Argyll, around Inveraray and particularly at the traps in Glencoe.”

Dr Blackwell added: “The counts are trailing off now as the first generation are dying and the second about to begin but we are set to get a third generation in September if the weather continues.”

There are 48 different types of midge in Scotland but it is the 3mm long Highland midge that commonly causes problems for Scots in the summer months.

Only the females actually bite however hill-walkers and golfers will have to have the insect repellent at the ready if the wet and warm weather conditions continue throughout the summer.

Incredibly, two million midges weigh just a kilogram and one square metre can contain up to 500,000 of the insects.

Dr Blackwell advised: “Be prepared, make sure you’re wearing insect repellent and don’t go outside in shorts and a t-shirt during their peak activity during dawn and dusk.”

The forecast ranks an area’s midge levels on a scale from one to five – one being “No flies on me!” and five being “Smidge up and be thankful!”

Aviemore in the Cairngorms is not normally considered a midge hotspot but it currently has the second-highest warning level at four, meaning “That’s no mist, that’s midges!”

The Scottish tourism industry is estimated to lose nearly £286m a year as people are put off by the biting insects.

A midge can live for between two days and two weeks depending on how favourable the weather conditions are.

Visitors to the Highlands have expressed their views on the “wee beasties” online, with some agreeing this year is the worst.

One visitor wrote online: “Went up Stac Polliadh and the midges were some of the worst I’ve seen.

“Annika’s response to the walk: ‘The most deeply unpleasant experience of my life.’ That’s summer in Scotland!”

One Facebook user posted: “Tonight’s sunset had great potential, but… midges, worst I’ve experienced ever and that’s saying something…”

Another said: “True facts: Scotland’s midges are the worst. I’m. So. Itchy.”

Whilst one Twitter user tweeted: “West coast of Scotland can get tae f**k! Midges have eaten me down to the bone!”