A SEVEN-year-old boy is returning to his home in Scotland after pioneering treatment in Mexico caused his terminal brain tumour to start “dying”.
Luke Stewart was given up to nine months to live in January this year after doctors discovered he had a brain tumour known as Diffuse Intrinsic Pontine Glioma (DIPG).
His parents, Jennifer Ure Stewart and Mark, raised more than £164,000 to fly him to overseas for groundbreaking treatment to prolong his life, which is not available in the UK.
The NHS said they could only provide radiotherapy to prolong Luke’s survival by months and give him steroids to reduce the pressure of the tumour.
Over the past three months, the family from Tranent, East Lothian, have witnessed him respond to treatment and seen their beloved son being able to give eye contact and smile again.
Videos show him running and swimming during treatment at the Monterrey Vale Oriente hospital in the north-eastern state of Nuevo Leon.
And now they have revealed that treatment has shrunk the tumour, thinned its walls and caused the tumour to “melt” – meaning they’ll be returning home in the next few days.
Jennifer, a business analyst for RBS, shared the incredible news to the 22,000 members of the Help Luke Facebook page she set up saying that doctors have now finally given her hope.
The 33-year-old also shared images showing Luke eating away while giving the camera a thumbs up from his hospital bed.
She said: “Luke did amazing yesterday, wasn’t too pleased when he woke up from the procedure and Dr Garcia had to help hold his leg down so no damage was done.
“But once he came round, no nebuliser needed and he said he felt good. Ate really well more than I have seen him in a while.
“He had a good night, no temperature, sickness or headaches. He was super good this morning, ate his breakfast and had lots energy, I keep telling him to slow down.
“Finally after 12 hours of telephone calls, we have our flights sorted. We arrive three hours later in the UK but flight times are better, thank you to everyone that tried to help us today and the messages of help simply amazing. We’re coming home baby!”

Sharing details of how the treatment has helped Luke, she added: “We saw the doctors tonight, had a fantastic appointment with them where we reviews Luke’s first scan after we arrived, halfway through and his latest scans.
“We have seen a big change after the first treatment then gradual improvements which is fantastic. DIPG is a high aggressive tumour so to see stable and improvements is wonderful.
“We see shrinkage, walls of the tumour are thinner, tumour is melting/dying, improved MRI’s, more grey area = No activity and improved clinically.
“The doctors here are continually improving the treatment, adding what is needed, looking and researching and using their existing knowledge.
“It’s very hard and strange for me to hear the doctor talk about the future and future plans for Luke, as eight months ago we had no hope, we had no future, please keep praying for us and believe.
“We feel extremely blessed and lucky to be here. Our children are our world. See you soon everyone.”
Jennifer also thanked everyone for their support and urged the public to continue sharing their story to raise awareness for DIPG.
Luke was first diagnosed on 5 January and since then £164,000 has been raised for him to have the treatment, currently not available in the UK.
Luke’s father had previously been told four times by local medical professionals that his son had a virus after the child began slurring his speech, losing his balance and complaining about headaches.
But after taking the youngster to the Sick Kids in Edinburgh, he was sent for a CT scan within 30 minutes of arrival, which later revealed his tumour.
He was given between just six and nine months to live by doctors in Scotland and told that the NHS could provide him with raidotherapy to give him a semblance of a quality of life.
According to The Brain Tumour Charity only around 10% of children with DIPG survive longer than two years after diagnosis.
The family looked into treatment in Mexico which costs around $40,000 (£30,800) to see a doctor including the initial operation and living costs. 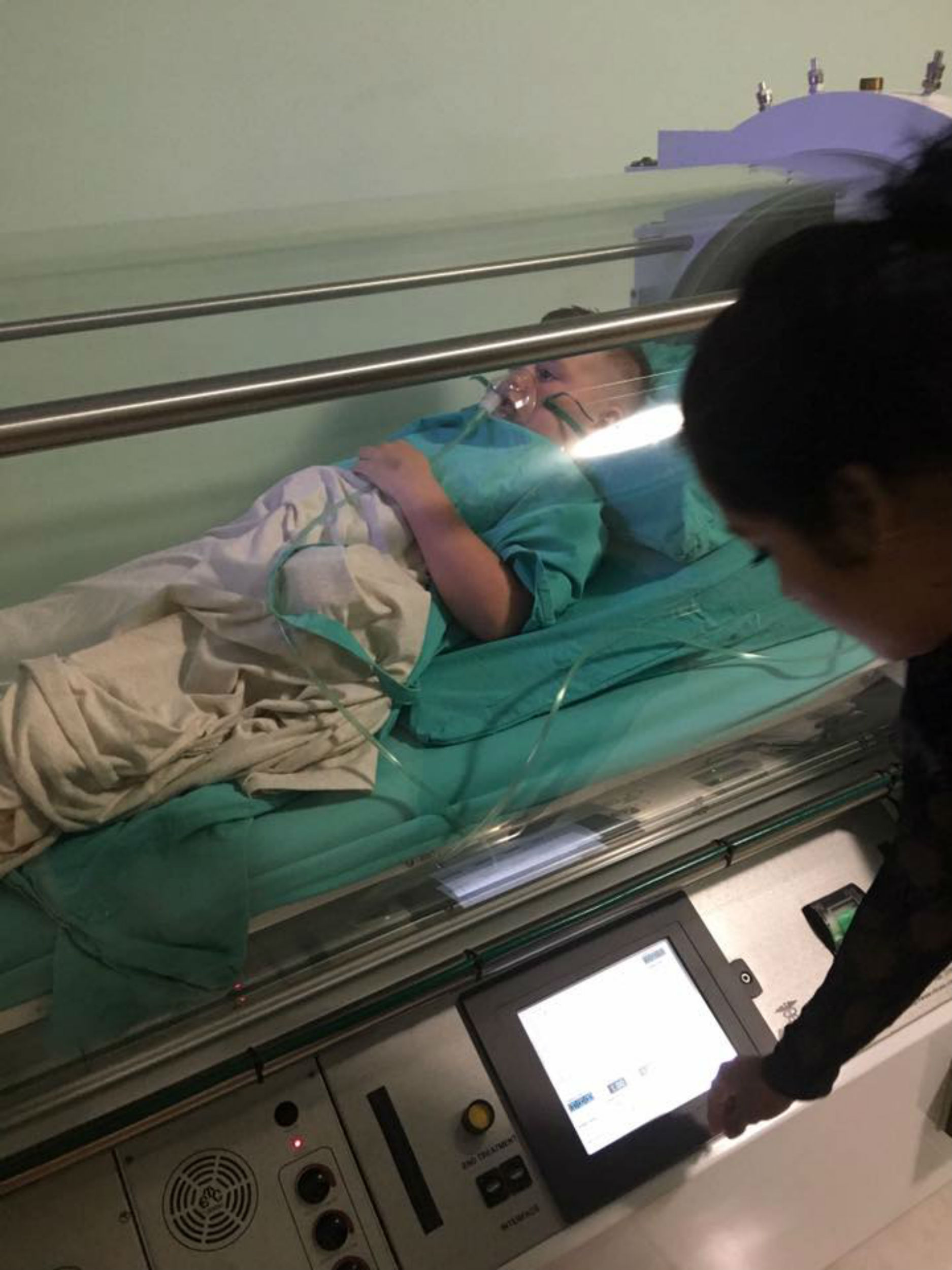 Luke and his family are set to return back home to Scotland on Friday.
Speaking today from Mexico, Jennifer said: “It’s been four months now that we’ve been out here so we are all excited. Luke and the boy’s can’t wait to get back home.
“He’s been responding well to the treatment. He showed a big improvement from the first treatment and then gradually as time’s gone on he has gradually been getting better.
“The tumour has reduced in size and clinically, he is like a different child.
“We want the tumour to reduce and essentially be scar tissue so it’s dead and so he can live life like a seven-year-old.
“When you are told your son has only got six to nine months and you get to that six months, you feel like you’re on borrowed time.
“But then when you see him smiling and being all happy it gives us hope and strength. It’s been a long journey and it’s not finished yet, but I will never stop fighting for Luke.”

Luke and his family will have to return back to Mexico in three weeks time to meet with doctors.
Jennifer added: “It will be every three weeks until the end of the year and then we will see from there.
“It will all depend on how his scans are looking but they’ve said if we see any changes or are worried, just jump on a plane and get back over and they will be there to help.
“They’re dedicated to every single child out there and the kids absolutely love them.
“When we initially got taken into that room and told about the tumour we were told nothing can be done, that’s it but there is.
“The doctors over here have been absolutely amazing. I can’t even begin to explain how great they have been.
“They are so supportive and caring and they give us hope. Out here, they’ve got children with more complications that we had and they’ve turned their lives around.”